Sunday is a fairly big day in the sports world.

Not only will a U.S. Open champion be crowned, but the Golden State Warriors will face off against the Cleveland Cavaliers in Game 7 of the NBA Finals.

Jordan Spieth took to Twitter to support his friend and fellow Under Armour ambassador, Warriors point guard Stephen Curry, before heading out for his final round at Oakmont, displaying the NBA MVP's newest shoe, the Curry Two Low.

The sneakers have been roundly criticized as "dad shoes," but don't tell that to Spieth, who describes them with an emoji as "straight fire."

Michael and I bringing the @stephencurry30 "straight " to the course today pic.twitter.com/njdTfo5nVR

Maybe he actually believes that, or maybe he's just excited to have a pair of shoes that match his hairline.

Whatever the case. It didn't take long for the comments to start rolling in from other pros:

@JohnPetersonLSU @JordanSpieth @StephenCurry30 could get a job in the pharmacy #cvs 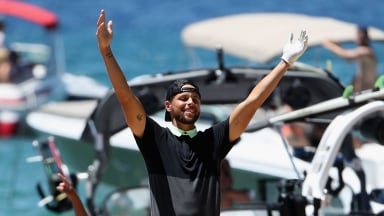