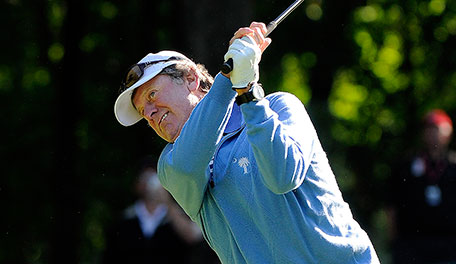 If Dustin Johnson wanted any hometown support after blowing a chance to win the U.S. Open last month, he needn't look any further than one of the most famous people in the area. Steve Spurrier has his back.

The University of South Carolina head football coach spoke Tuesday as part of SEC media days, and as usual he did not disappoint. Specifically, when the topic of dealing with tough losses came up, the Ol' Ball Coach referenced DJ's gut-wrenching debacle at the year's second major last month, where he eventually missed a 4-footer on the final hole and lost to Jordan Spieth.

"Those were some tough losses. I was watching Dustin Johnson interviewed on the Golf Channel the other day, and they said, ‘Dustin, after you three-putted at Chambers Bay, you didn't come to the trophy presentation. Why weren't you there?’ Gee, the guy just three-putted from 12 feet. He just said, ‘I needed to get away.’

"After we sort of blew a game, or you can say Tennessee beat us [when] we couldn't hold on to a 14-point lead with a little over four minutes. Yeah, I felt like getting away a minute. I was quickly at the press conference and left. So hopefully, people can understand, some losses are tougher than others, especially when you have a good lead and you can’t hold it.”

Though Johnson initially said he "didn't know" he was supposed to attend the awards ceremony after coming in second place, a totally plausible excuse (for anyone who has never played an organized sport in their entire life), we'll give the coach a break here and just enjoy the company plug and golf reference.

Plus, this is as good a reason as any to post Spurrier's swing, which, to put nicely, has a few quirks: