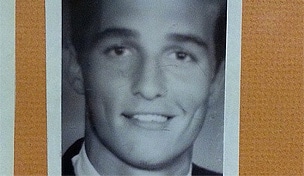 Getty Images
SCOTTSDALE, AZ - FEBRUARY 06: Rickie Fowler reacts to the fans on the 16th hole during the third round of the Waste Management Phoenix Open at TPC Scottsdale on February 6, 2016 in Scottsdale, Arizona. (Photo by Christian Petersen/Getty Images)  -

As if the whole world didn't already want a piece of Matthew McConaughey before Sunday, interest in him probably skyrocketed after winning an Oscar for his role as Ron Woodroof in "Dallas Buyer's Club." Turns out, it's not just directors and Hollywood-types who are seeking him out - the University of Texas men's golf team is, too.

In a photo posted to their Instagram account on Monday, the UT team extended an invite to McConaughey to golf when he returns to Austin, Texas, where he resides with his wife Camila and their three children Levi, Vida and Livingston.

The invite shouldn't come as a shock - McConaughey played golf in high school, plays to a high single-digit handicap and says he has four holes-in-one.

There's undoubtedly a lot on McConaughey's plate right now, but here's hoping he's cast in a golf film one day. He wouldn't be the first major-motion picture actor to take that route. Will Smith, a two-time Oscar nominee, played Bagger Vance in "The Legend of Bagger Vance," and Robert Duvall, a six-time Oscar nominee and winner of the Academy Award in 1983, played Johnny Crawford in "Seven Days in Utopia."

If we were UT's men's golf team, we'd want to play a round with him, too. And if McConaughey accepts the invitation, here's hoping UT invites this Grill Room correspondent as well.