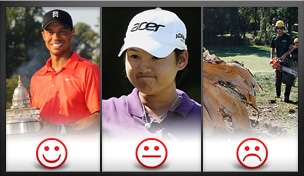 Everything in the world seems to be exactly as it should when Tiger Woods is winning golf tournaments. His 74th career PGA Tour victory highlights this week's edition of the Good, the Bad & the Ugly.

I'll admit, I've never hit my ball out of a water hazard.

It's a large enough feat to tame the Bear Trap at PGA National and post a first-round 66, but towering mammals were the least of Boo Weekley's concerns Thursday at the Honda Classic.

A small water moccasin, about 18 inches long and poisonous, was found near the fifth green on Day 1. As marshals were calling on the radio for help – hoping someone could bring out a shovel or something to use to remove the snake – Weekley came to the rescue. He scooped up the snake with the end of his driver and deposited it into a canal.

2. Chamblee: There's no comparison in the Tiger vs. Rory comparison

Rory McIlroy walking off the course midway through his round in a Florida event is just the latest similarity between him and Tiger Woods (2012 Doral, 2012 Players.....Woods withdrew in the second round of the WGC-Cadillac with Achilles heel pain last year. He withdrew from Players in 2011 with pain in his left knee. He WD’d from The Players in 2010 with a neck injury). While we (the media) have been trying to aniont McIlroy as the next Woods, the following graphic shows there's really no comparing the two.

Camilo Villegas goes from cloud nine to ?? After posting a first-round 6-under 64 and jumping out to the 18-hole lead, he posted a 7-over 77 the following day to miss the cut by one. Villegas lost his fully exempt status on Tour in ?? and did not make it through Q-School last year. Having won the Honda Classic in 2010, he was exempt this week as a past champion. but has only posted one top-10 since (???)

Violent, tornado-like storms pummeled across the mid-Atlantic region and the eastern U.S. this past Friday, taking lives, causing power outages and knocking down trees.

The storm blew through the Washington D.C. area late Friday and littered Congressional Country Club with limbs, fallen trees and debris. Roughly 10 full-time tournament staffers, the Congressional maintenance crew and a small cast of others worked through the night to make the course ready for the 80-man Saturday field at the AT&T National. But in the interest of safety for fans and volunteers, tournament officials decided to close Congressional to spectators and volunteers for Saturday’s round.

In total, reports estimate 13 lives were taken and 3 million are left without power across the entire mid-Atlantic region.

What’s more, is that The Greenbrier Resort in West Virginia, host to next week's Tour stop, the Greenbrier Classic, was also hit by the storm.

Approximately fifty 200-year-old trees are down on the Old White TPC course and a number of skyboxes, spectator areas and camera towers were destroyed in the storm.