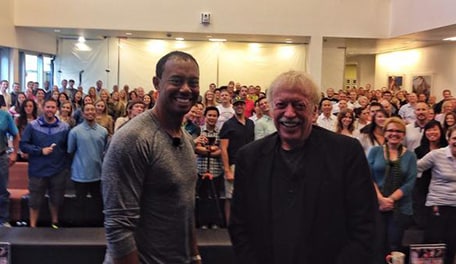 Thanks to a few Nike and Tiger Woods Foundation employees on Twitter, we were aware Tiger Woods was at Nike Golf headquarters with company founder and chairman Phil Knight, but the man himself decided to share a glimpse inside:

Hanging with one of my favorite people, PK, @nikegolf hq today. pic.twitter.com/vAR4PznCF5

According to Nike PR rep Charlie Brooks on Instagram, Woods told a story to a group gathered about testing three new Nike clubs, indentifying one club as three grams lighter than another, which would seem to indicate he's back to making swings.

This is not the only news coming from Nike HQ this week; on Tuesday, Cindy Davis, Nike Golf’s president since 2008, announced she will retire from the company.