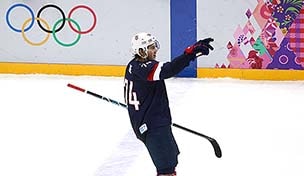 Getty Images
Sergio Garcia of Spain celebrates a birdie on the 3rd green during the final round of the 144th Open Championship at The Old Course on July 20, 2015 in St Andrews, Scotland. (Photo by Stuart Franklin/Getty Images)  -

As great as life is for U.S. hockey team member T.J Oshie right now, you can take solace in the fact that his golf game probably looks a lot like yours. A quick glance at his Twitter timeline reveals he's not ashamed to ask "The Golf Fix" host Michael Breed for advice, and during the Super Bowl no less.

Oshie's popularity in the States has skyrocketed since Saturday, when he led the U.S. over Russia in an Olympic preliminary game by making four of six shootout attempts after the teams finished regulation and overtime at a 2-2 standstill. If you haven't seen the highlights, shame on you. Click here and climb out from whatever rock you live under.

@MichaelBreed you can come over and work on my golf swing? It's already shaped by past @TheGolfFix episodes. #SB48 #12s

The U.S. finished the preliminary round 3-0 to grab the No. 2 seed entering the quarterfinals on Wednesday.

You just keep doing what you're doing, T.J. I have a feeling that a gold medal will get you as many golf lessons as your heart desires.