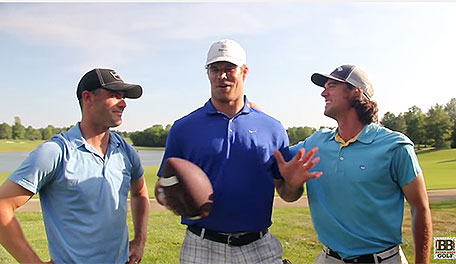 When it comes to golf trick shots, the Bryan Bros have pretty much cornered the market. So when Carolina Panthers tight end Greg Olsen went looking for a trick-shot video to star in, it should come as no surprise that he ended up in the experienced arms of the brothers who hail from just south of the state in which he is employed.

The video offers some comical insight into the day they spent together starting with a Monday Night Football-themed opening. And while there aren't a bunch of new trick shots, we do get a closer look at how well the Pro Bowl tight end knows his own stats, as well as his thoughts on chocolate milk, if you stick around til the end.

Also, in case you needed a reminder of how hard it is to do what the Bryan Bros do, here's one of the most athletic guys in the NFL giving it a shot, or four.

h/t to the Bryan Bros