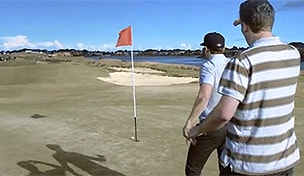 Below is a video of one of the best aces ever recorded, because instead of using a golf club, it was holed with a baseball bat. While the video is getting more than its fair share of views on YouTube, it is shrouded in a cloud of of doubt – with plenty of viewers claiming the hole-in-one was somehow staged. While we'd like to think someone actually made this shot, the year is 2013 and anything is possible with CGI. So with that, we present this hole-in-one without comment. You be the judge. Is it real or fake?