Video: Obama scolds himself during August round 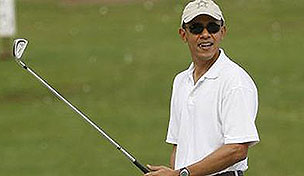 It wasn't quite a Tiger Woods temper tantrum, but the President of the United States displayed some of that same raw emotion after a bad shot during a round in August at the Vineyard Golf Club on Martha's Vineyard.

TMZ Sports was able to obtain a clip of the shot and aftermath (although it looks like it was shot with the same camera used to capture footage of Bigfoot), in which President Obama appears to hit a slice and then yells, 'C'mon Barack ... not THAT far left.'

These Tour pros might want to take a note from our Commander in Chief.