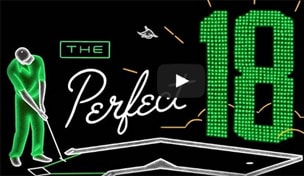 Spoiler alert: The man in the video below records a perfect score in Putt-Putt. That being said, you still need to watch this video produced by a team at Grantland, which tells the story of Rick Baird, an IT manager out of Richmond, Va., who shot a perfect score in Putt-Putt on April 9, 2011. That's right, he one-putted all 18 holes in succession.

Unlike miniature golf, Putt-Putt is played on official courses that are void of windmills, gators, pirate ships or any other frivalities that can cause one's ball to be knocked off-course. Baird became one of only three people to record a perfect 18 in Putt-Putt, a game that has been a sanctioned competition for more than 50 years.

Enjoy this video and then head to the putting green, because as the old adage goes (and as Baird proves) ... practice makes perfect.