What to call Woods' signature sandwich? 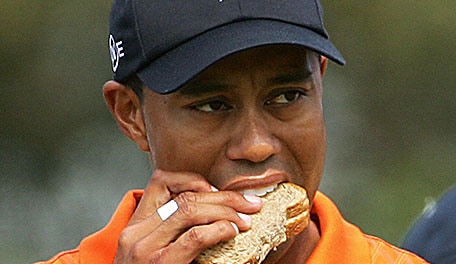 In case you haven't heard, Tiger Woods is opening a restaurant.

While not much about “The Woods Jupiter: Sports and Dining Club” is known at this time, thanks to Golf World's Jim Moriarty and the power of Twitter, when the doors do open for business, Tiger won't have any trouble filling out a menu. Moriarty posed the question below, asking for signature sandwich names.

And the Internet - as it has done time and time again - delivered.

@AlanShipnuck @GWMoriarty the Sergio has to fold when you apply pressure to it.

@AlanShipnuck @GWMoriarty The Furyk...don't know what's in it but you definitely choke at the end

@AlanShipnuck the Watson: whatever you're able to scrape off from underneath the bus Phil threw him under

@gwmoriarty The John Daly: a glass of vodka, no bread.

Got any others? Leave them in the comment section below. And go make a sandwich, your mouth must be watering.