What Tour players can be thankful for this Thanksgiving 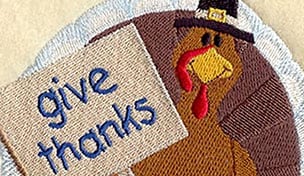 When it comes to professional golfers, there’s no shortage of things for which to be thankful. For starters, playing golf for a living. But in the spirit of the holiday season, we dig a little deeper. As these pros sit around the table this Thanksgiving, after a season of general improbability becoming the norm, here is what they ought to be giving thanks for.

Rory McIlroy: He’s a 23-year-old two-time major champion with a firm grip on the world No. 1 ranking and more money than he knows what to do with (even without Nike's purported deal). Oh yeah, and his new best bud is his childhood idol, Tiger Woods. Is there anything he shouldn't be thankful for? Maybe his hairdo, but $200 million in the bank makes even that adorable.

Tiger Woods: Three wins, his health, a new best friend – if he wasn't trying to live up to the standards of say ... Tiger Woods, that's a pretty good year. It's nice to have Tiger back in the mix at majors and fist-pumping his way down the stretch on Sundays. It was a long 2 1/2 years between Tour wins. Long for the sport, and probably even longer for him. He should be thankful he's back to winning, even if he's not dominating the way he once did.

Jim Furyk: It's tough to imagine a worse year for a professional golfer than the one Jim Furyk just had. He played well, but couldn’t close. As he digs into the mashed potatoes and washes them down with, what else, a 5-Hour Energy shot, he should just be thankful that the season is finally over.

Ernie Els and Webb Simpson: The two individuals who benefited most during the “Year of the Meltdown.” This season’s U.S. and British Opens will be remembered more for who lost them than who won, which is sad. But Simpson and Els will go into the record books as champions, and record books don’t have room for the whole story, so they can be thankful for that.

European Ryder Cup team: Every member of that team should be forever thankful to that Chicago policeman who was nice enough to escort Rory McIlroy to Medinah Country Club just in time for his singles match. If not for him, the Europeans have no shot at making that Sunday charge. Hopefully they did the right thing and sent him a card or something. By the way, in two years, maybe put someone in charge of wakeup calls? Just a thought.

Bubba Watson: Be thankful for that homemade golf swing; without it you wouldn't have a green jacket. And without that, you might not be invited back after you drive the General Lee down Magnolia Lane as defending champion at The Masters.

Rickie Fowler: Obviously, be thankful for the win – don’t take those for granted. But on a more important note, be thankful that you are a person that other people aspire to dress like, even though you repeatedly dress in one solid color from head to toe; that’s got to be a cool feeling. Don’t take that for granted, either.

Carl Pettersson: Of all the professional golfers out there, he’s probably going to have the best Thanksgiving, just based on sheer number of calories consumed. The man who won this year’s RBC Heritage should be very thankful that the more he eats the better he seems to play. After dropping 30 pounds in 2009, he had one of his worst seasons, so he went back to his diet of “10 beers and a tub of ice cream before bed,” and hasn’t looked back. You have to applaud his efforts to hone his craft; hopefully he washes down those beers and ice cream with some turkey and extra gravy this week. Carl has the problems we mere mortals can only dream of.

Brandt Snedeker: Be thankful that you can buy a really, really big turkey this Thanksgiving with the $11.44 million you earned in one weekend this year by winning the Tour Championship. Or maybe you did something a little more conventional with the money? The turkey thing was just my idea. Either way be thankful, you hit the jackpot.

Jason Dufner: We’ve all heard of the breakout year; this guy had himself a breakout month, for which he should be giving thanks every day for the rest of his life. Between the end of April and middle of May, he won his first two Tour events, sandwiched around his wedding to longtime girlfriend Amanda Boyd. He should also be thankful that here in America we like winners; because somehow this breakout month got a man – who shows no emotion ever – a starring role in a sneaky-funny Comcast commercial.

Mike Davis: Of all the lunatics who have come barging into a sporting event trying to ruin everyone’s good time, the U.S. Golf Association executive director should be thankful he got Jungle Bird, a “deforestation activist” who just wanted to let out a few bird calls for the camera. But after seeing Davis spring into action like golf’s version of Batman, he suddenly looks like a tough guy. Expect him to be up on stage next year when the trophy is presented, welcoming any new challengers. A precedent has been set.