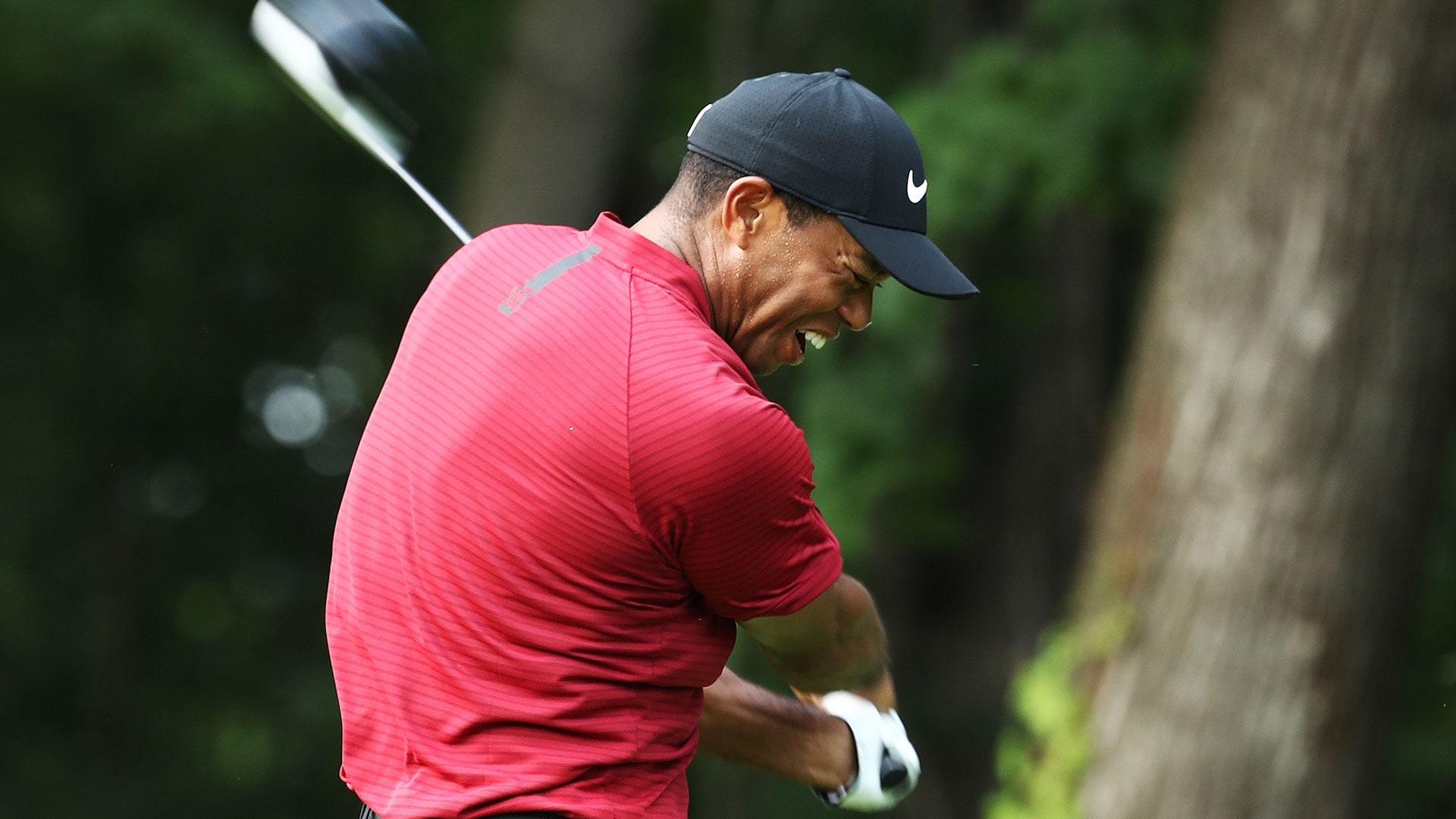 We’ve seen it before. Especially in the late summer, at PGA Championships in humid Middle American locales like Chicago, Louisville and Tulsa. Last Sunday in St. Louis, there was Tiger Woods glistening with sweat, his mental gears meshing, the body flowing. In the hunt, and in the zone.

Amid the steam rising from Bellerive’s zoysia fairways, it seemed something that had been stuck within Woods loosened and fell back into place. Through some mix of remembering and discovering, he made a breakthrough toward the goal of solving the most prolonged and perplexing puzzle of his career – the way back to being a major championship closer.

Woods reached a longed for and special mindset in the final round of the 100th PGA. He hadn’t had it at Bay Hill in March, where after climbing to within one stroke, a drive pulled out of bounds on the 70th hole ended his challenge. He came closer at Carnoustie last month, putting together a near flawless front nine that got him tied for the lead, only to almost immediately make the kind of killing mistakes he never made in his prime.

Many began to wonder whether what Nick Faldo calls the 15th club – nerve – had left Woods forever. But on Sunday at Bellerive, he proved that his mastery under pressure is still accessible.

First, a scrambling, lemonade-out-of-lemons front-nine 32 got him within a stroke of a temporarily faltering Brooks Koepka, who Woods began the day trailing by four. “I was hanging in there with my mind, basically,” he later said. “And it got me through.”

Then on the back nine, Woods figured out his swing and homed in on the flags, immersed in a fierce focus that amid the thick humidity revived memories of his four previous PGA victories.

Revived, but reprised. For all of the brilliance Woods exhibited down the stretch, he made two crucial errors. On the par-4 14th, a pushed iron off the tee and an indifferent chip led to a bogey. And, most fatally, the pushed drive into the hazard on the reachable par-5 17th, when he had to have birdie to answer a resurgent Koepka.

Woods, whose sheer fight in his 42nd year might even exceed what it was in his 21st, bounced back from both holes with birdies. When he holed a 20-footer on the 18th for 64, his celebratory uppercut was partly about getting within two of Koepka. But mostly it was the deep satisfaction of confirming that his golfing head – the biggest key to all his success and most of his struggles – is healthy again.

Of course, Woods won’t truly be back until he wins. Which means his latest breakthrough at Bellerive will have to be followed by one more. Which will have to come in the part of the game where Woods has most declined – the tee shot, especially with the driver.

Woods and the big stick have had a volatile relationship. In his early years on the PGA Tour, much of his domination was built on distance. He wasn’t the straightest, but he wasn’t wild. And he had a knack for piping important drives down the middle.

Woods knew as a teenager that being long and straight has always been the most efficient way for a gifted player to separate from the pack. It was Jack Nicklaus’ advantage for much of his reign, why Greg Norman stayed at No. 1 in the world for so long, why Dustin Johnson is No. 1 now, and how Koepka won at Bellerive. Woods in his mid-20s, when he played the most explosive golf of his career, was a devastating driver. In 2000, he led the PGA Tour in total driving, achieving a career best rank of 54th in driving accuracy.

But those numbers started to decline, in part because Woods never really quite felt as comfortable with oversized titanium heads and lightweight shafts as he had with a smaller metal head and heavier steel shaft.

Butch Harmon, as well as the instructor who followed him, Hank Haney, have said that Woods was always preoccupied with distance, ultimately to the detriment of his technique. The goal of producing more speed and having more power from the rough (along with ostensibly preventing injury) is why Woods began intensifying his work in the weight room. Tellingly, both Harmon and Haney both wanted Woods to swing with less force and more control, sacrificing a bit of distance for increased accuracy. But they couldn’t convince Woods.

With age and injury, Tiger gradually lost some distance in his 30s. But while he became a better iron player, he did not get straighter with the driver. Still, even through his embattled last 10 years, he continued to play a power game. At the moment, he ranks 34th in distance on the PGA Tour with an average of 304.7 yards, and an impressive 16th in clubhead speed with an average of 120.46 mph. But he’s 176th in driving accuracy, 120th in total driving, and 127th in strokes gained: off the tee. In the obscure but telling category of consecutive fairways hit, Woods ranks 305th with a best of only nine fairways in a row.

But at Bellerive there was an indication that Woods may be changing his approach. In his post-round interview on Sunday, he twice – unprompted – pointed out that there is a level of drivers above him – not only longer, but straighter.

“He’s a tough guy to beat when he’s hitting it 340 in the air,” Woods said of Koepka. “Three-twenty in the air is like a chip shot. And so that’s the new game … Dustin’s done it now, Rory’s doing it … Those guys, if they’re driving it well, they have such a huge advantage because of the carry.”

It was a rare concession from Woods. In former days, if another player was better than he was at some part of the game – be it distance control with short irons, bunker play, lag putting – he would quietly make that strength a target to match or exceed. After the 2000 season, he only half-kiddingly told driving accuracy leader Fred Funk that he was coming for him.

The younger Woods may have invested his pride in being one of the longest hitters, but I suspect the 42-year-old version is wise enough to be open to any adjustment that will help him beat people in the time he has left. And he’s too smart to try to beat them at their own game.

The evidence from Carnoustie and Bellerive is too stark (along with his rank of fourth on Tour in strokes gained: approach the green). Woods is now at his best when he plays to his greatest strength – iron play. And though he is still strong enough to make things happen from the rough, there’s a good argument that he is the best in the game with an iron from the fairway. The only thing holding him back are untimely drives like the one on 17 at Bellerive.

Ergo, to use a term Woods favored when he was fresh out of Stanford, put the driver in the fairway. Not the 3-wood or driving iron, which will cost Woods even more distance against the Johnsons and Koepkas of the world. But a slightly dialed down driver. One that he can hit with less psychic “all or nothing” stress that comes from the small margin of error he leaves himself with a hard driver swing. Accepting that he can no longer be among the biggest hitters and adjusting accordingly gives him his greatest chance of still being the best player. In short, take the advice offered by Harmon and Haney.

Now that the major season is over, developing a new, more controlled game for himself in 2019 would be my hope for Tiger Woods. He’s figured out a lot lately, in particular at Bellerive clearing the mental hurdle that was blocking him from performing down the stretch on Sundays. That was a big one, and now it seems like the wind is at his back. Yes, the clock is ticking, but it feels like there’s plenty of time.