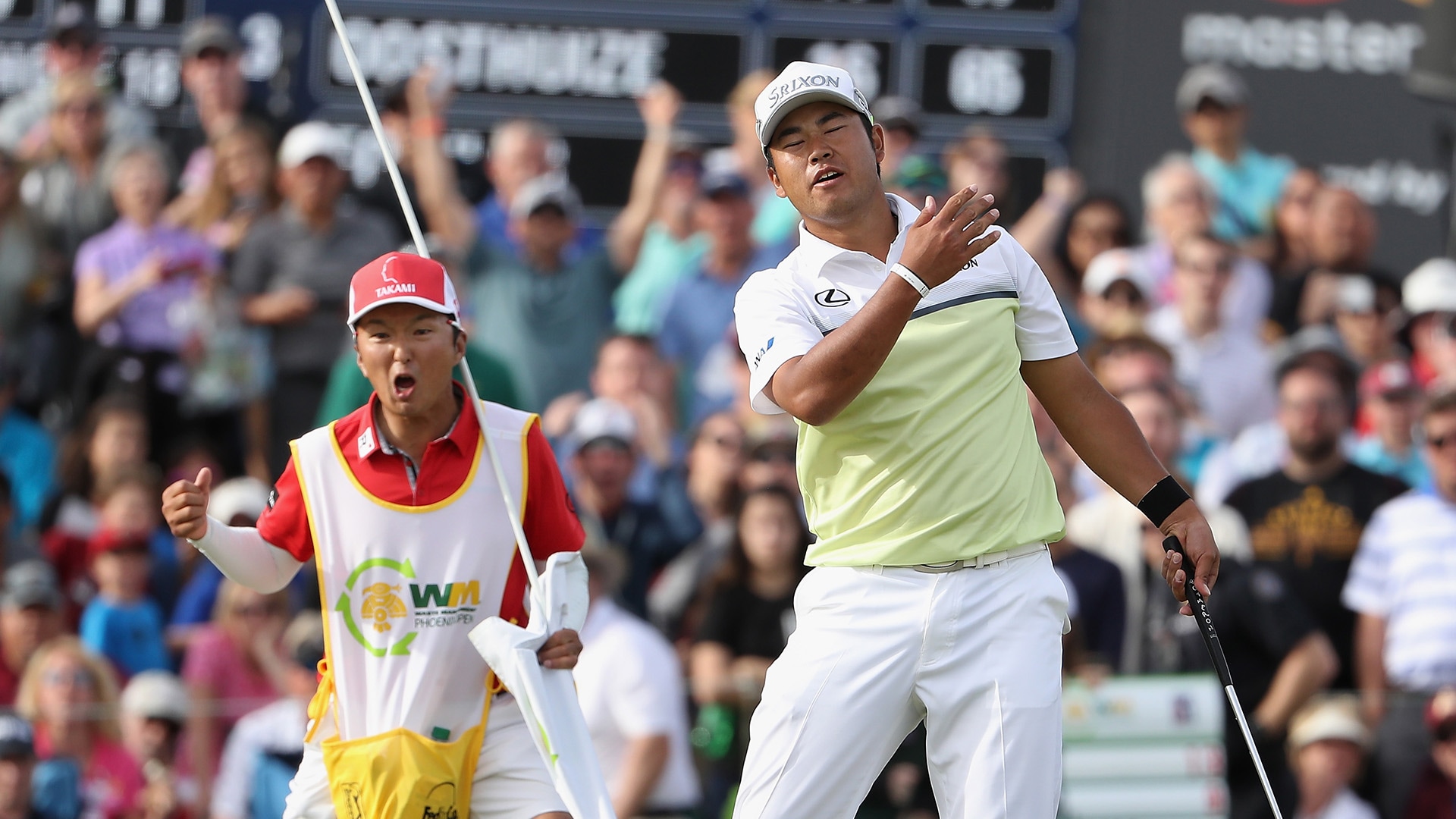 SCOTTSDALE, Ariz. – It wouldn’t be the Waste Management Phoenix Open without utter chaos. And not just from the crowd.

Just when it started to look like a runaway victory at the biggest party on the PGA Tour, someone at Buffalo Wild Wings must have hit that switch from the commercial, and suddenly, a golf tournament broke out.

It ended with Hideki Matsuyama topping Webb Simpson in a playoff that stretched four holes and into the first quarter of the Super Bowl for the second straight year. Last year the 24-year-old Japanese phenom beat Rickie Fowler in similar fashion.

“I really didn’t think I could do it, and it was a struggle all the way around,” Matsuyama said. “But I’m just thrilled to win.”

Not only did Matsuyama go back-to-back in Phoenix, but he also took back the unofficial “hottest player in the world” honors from Justin Thomas, who missed the cut this week.

Dating back to last October, Matsuyama now has three worldwide wins, including the WGC in China and two runners-up.

“My hat’s off to him.” Simpson said in defeat. "He’s a great player. I knew he’d be a tough competitor in the playoff … he’s a great champion.”

They say golf is a game of inches. Maybe never more so than on Sunday at TPC Scottsdale.

Matsuyama and Simpson went back and forth long after a large chunk of the record crowd had left, each coming oh-so-close to the sweet taste of victory before Matsuyama sealed his second straight title with a birdie from 12 feet.

Matsuyama’s best chance to win actually came before the playoff started, with his birdie try on the 72nd hole from 19 feet stopping on the lip.

“I still can’t believe it didn’t go in,” Matsuyama said after his round. “Even now.”

Simpson’s came on the third playoff hole (No. 10) from about the same distance. His, too, came to a stop just before it would’ve dropped in.

“I didn’t think it was in but I thought it had a chance,” Simpson recalled.

Seven of the last eight winners of this event have come from behind in the final round, a trend that continued on Sunday. Byeong Hun An coughed up his 54-hole lead halfway through the final round, and from there it was anyone’s tournament to win.

Rickie Fowler and Louis Oosthuizen put the press on with matching 65s, but came up just short of the playoff. Phil Mickelson made an early charge but faltered down the stretch and finished with an even-par 71.

At the end of the day it was Simpson – and one of the sneakiest final-round 64s in recent memory – who ended up in the playoff after waiting around for 40 minutes with the clubhouse lead.

While he was disappointed with the loss four holes later, Simpson focused on the positives, admitting this was a huge step in the right direction.

“I feel like two weeks ago I was pretty lost,” Simpson said. "I just felt terrible about my game … so to shoot seven under on Sunday, birdieing 17 and 18 is a great feeling, knowing I had to do it."

Once ranked as high as fifth in the world, the 2012 U.S. Open champ hadn't recorded a top-10 finish since June and hasn’t won since the 2013 Shriners Hospitals for Children Open. He’s battled through the anchored-putting ban that was enacted in 2016.

“Putting has always been my thing, if I putt well I seem to play well. I’m thankful that I’ve found a method that has been working,” Simpson said. “I feel like if any change, just mentally with my putting, is just tried to simplify it. Don’t take too much time and just be thankful. I’m thankful that I made some putts and I had a chance to win the golf tournament.”

The only bigger surprise than Simpson making the playoff may have been who was in the gallery following along.

Bubba Watson, who embraced his fun-loving, goofier side all week long, came back out to the golf course to root on his buddy and former Ryder Cup partner.

“He’s one of my closest friends ... it felt great,” Simpson said. “He’s always been supportive of me and it’s really thoughtful of him. I thought about it over the putt on 10, I kind of wanted to make it more with him here. That would’ve been pretty cool.”

Unfortunately for Simpson, it was not to be. But if the second-place showing is a sign of things to come, the future looks bright. Maybe not as bright as Matsuyama’s, but you need sunglasses to look in that dude’s direction after Sunday.