The Social: Masters of celebration 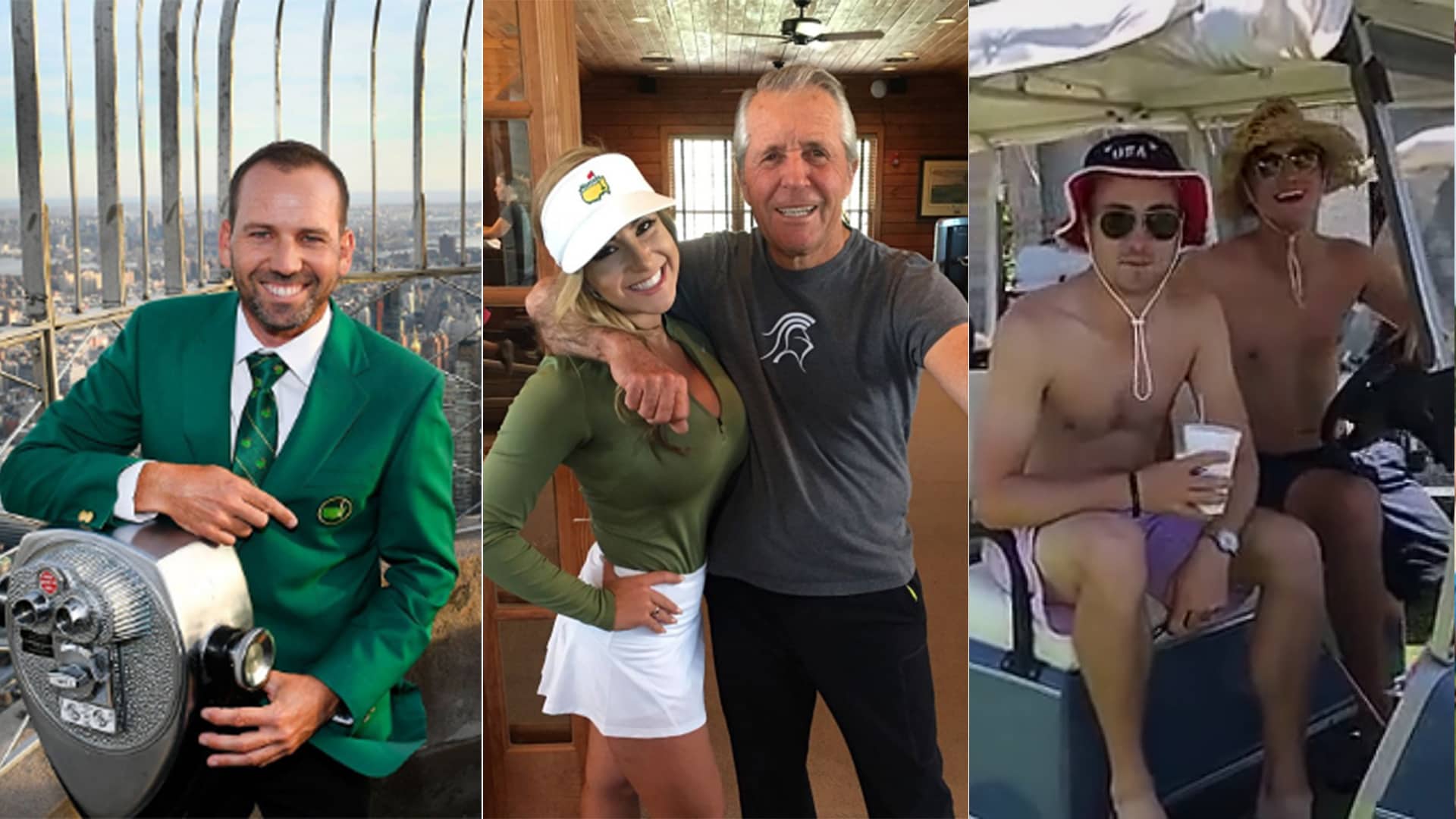 New Masters champion Sergio Garcia embarks on a whirlwind media tour after nabbing his long-awaited first major, the week-long party in Augusta, Ga., finally comes to an end and the #SB2K17 crew officially embarks on their second annual Bahamas vacation. All that and plenty more in this Masters edition of The Social.

Sergio Garcia finally got that major he's been after for almost two decades, outdueling Justin Rose in a Masters playoff and slipping on a green jacket in a magical moment on Sunday.

And then ... he immediately took off for New York City to start his tour with various media outlets that all want a piece of the Masters champion about this time every year.

He posed on top of the Empire State Building (which was later lit up green in his honor) with his fiancée, Angela Akins, walked around the city in his new duds and stopped by the New York Stock Exchange and CNBC.

On top of the world. pic.twitter.com/5kowqyzSwM

After a stop at @NYSE and @CNBC, the victory lap continues ... pic.twitter.com/kklDNypShR

Empire State Building lit up in green tonight to celebrate @TheSergioGarcia and his @TheMasters win. pic.twitter.com/cK3mMvjY0G

So yeah, hope you're not holding your breath, Luke Donald, Sergio is taking his time on this well-earned victory lap.

Sergio Garcia got congratulatory tweets from all over the place on Sunday night, including one from the guy he beat in a playoff to earn his green jacket, Rose.

But none were better than the ones from Hall of Fame NFL running back Emmitt Smith.

Smith took to Twitter to congratulate Garcia on overcoming "a varsity" to get his first Masters title. A VARSITY. Like adversity, only not at all.

Perhaps it was just a typo, because the tweet was eventually deleted, and replaced with this.

Not much better. That tweet was also deleted and Smith got it right on his third try, but screenshots don't forget.

The golf world descended on Augusta, Ga., last week and anybody who is anybody in the sport enjoyed some time in and around the hallowed grounds of Augusta National.

That includes social media starlets like Paige Spiranac, Chelsea Pezzola and Elise Lobb, who got to experience the Masters in person while they weren't "working out" with Gary Player.

Masters Sunday Whos going to walk away with the Green Jacket? #Masters #Golf

When @gary.player uses you on his back as a weight so he can do some squats. YES, that JUST happened #legend @champions.retreat @pxg @gfore #golf #themasters

What better way to start #Masters Sunday then getting a morning lesson with the legend Gary Player. Amazing day & amazing tournament! Congrats @thesergiogarcia !! You deserved it!! #TheMasters #Golf #ChampionsRetreat

Tough gig, if you can get it.

Oh, and Snoop Dogg was there, so I guess you can say the year's first major delivered.

Bubba Watson had himself an interesting Masters week.

The two-time champ shot 74-78 to miss the cut, then had this to say to the press, “Golf is tough; I don’t know if you’ve ever played it. But writing articles is easy.”

Watson took to Twitter shortly afterwards to apologize and explained that his comments were a bad joke.

Apologies for my bad attempt at a joke today... my jokes as bad as my golf this week! pic.twitter.com/T6hVOBvcpV

If you want a lesson on comedy Bubba, take one from legendary golf writer Dan Jenkins, who fired off this zinger as the Masters was wrapping up.

I can't wait to read Bubba's article on this one. All of the he said-he said aside, #SB2K17 is officially on. The rest is just semantics.

Check out the best images from the Bahamas vacation here.

Last year, he teed off in the final group on Sunday at the Masters. But after a final-round 81, Kaufman watched this year's Masters from the "Natty Shack," a beer-sponsored event down the street from Augusta National.

Saw this billboard driving through Augusta, decided to stop and see what the #Nattyshack was all about... Had so much fun, I'm coming back tomorrow. #seeyathere

So Kaufman had some time to talk during the season's first major, and Golf Digest caught up with him to ask him the important questions, like what's up with the most anticipated golf vacation of the season, #SB2K17?

"We've talked, but I doubt we can get anything on paper," Kaufman said. "Everybody's got such busy schedules."

Major buzzkill. But, was Smylie just throwing everyone off the scent? It's possible. Tim Rosaforte reported Tuesday on Morning Drive that the spring break shenanigans will go on, especially with Rickie Fowler and Jordan Spieth possibly needing a vacation after finishing the Masters with a couple of tough rounds.

So you're telling me there's a chance. Guess all there is to do now is wait, and check Snapchat, of course.

Ah ... Twitter. The great place where fans can let professional athletes know all the ways they've let them down, from personal reasons to gambling losses. Such is the case with this fine fellow, who chirped Ryan Palmer for blowing his bet by only finishing ninth at the Masters, and now he can't afford a fence.

Only problem is, Palmer didn't finish ninth at the Masters this year, because he wasn't in the field. That would be Ryan Moore, a fact not lost on Palmer, who responded as nicely as he could.

Look here genius,before u go twitter bashing just b/c u lost,look who you bet on 1st before you tweet.I'll let @ryanmoorepga know how u feel https://t.co/1EAtSBx4aX

Got an extra grand lying around and want to own the least satisfying piece of golf memorabilia in existence? Then head over to Ebay where you can buy a egg salad sandwich wrapper from the 1997 Masters, when Tiger Woods won his first green jacket.

Yes, you're seeing that correctly. Someone has carried around a piece of trash for 20 years and decided this week to try and sell it for $999.

Grayson Murray hasn't made very many friends on Twitter in his young PGA Tour career, but this move ought to score him some points.

Twitter user @indianagolfpro tweeted at the pro, asking him for some help buying a dependable car to get his wife to and from the hospital for medical trips after a recent brain surgery.

Murray responded and offered to pay for the whole car, provided he got 10,000 retweets. Well, it didn't take long, and now the 23-year-old says he will hold up his end of the bargain, tweeting that he "can't wait" to provide a vehicle for couple.

@GraysonMurray How many RTs to pay the down payment for wife's car? Really need dependable one for all the medical trips. #HelpUsOut

I've seen your post about your wife and her brain surgery. No one should go through that. I'll buy you guys a new car if this gets 10k RTs. https://t.co/r1ZbsMI7T4

Love all the support everyone showed for @indianagolfpro! Can't wait to buy you and your wife that reliable car you've dreamed of having!

@GraysonMurray Still so shocked and speechless!! Thank you so so much. Never had anything like this happen to us. God Bless you bro.

Yeah, because the type of sandwich was the issue here.