The Social: $tre$$ful time of year 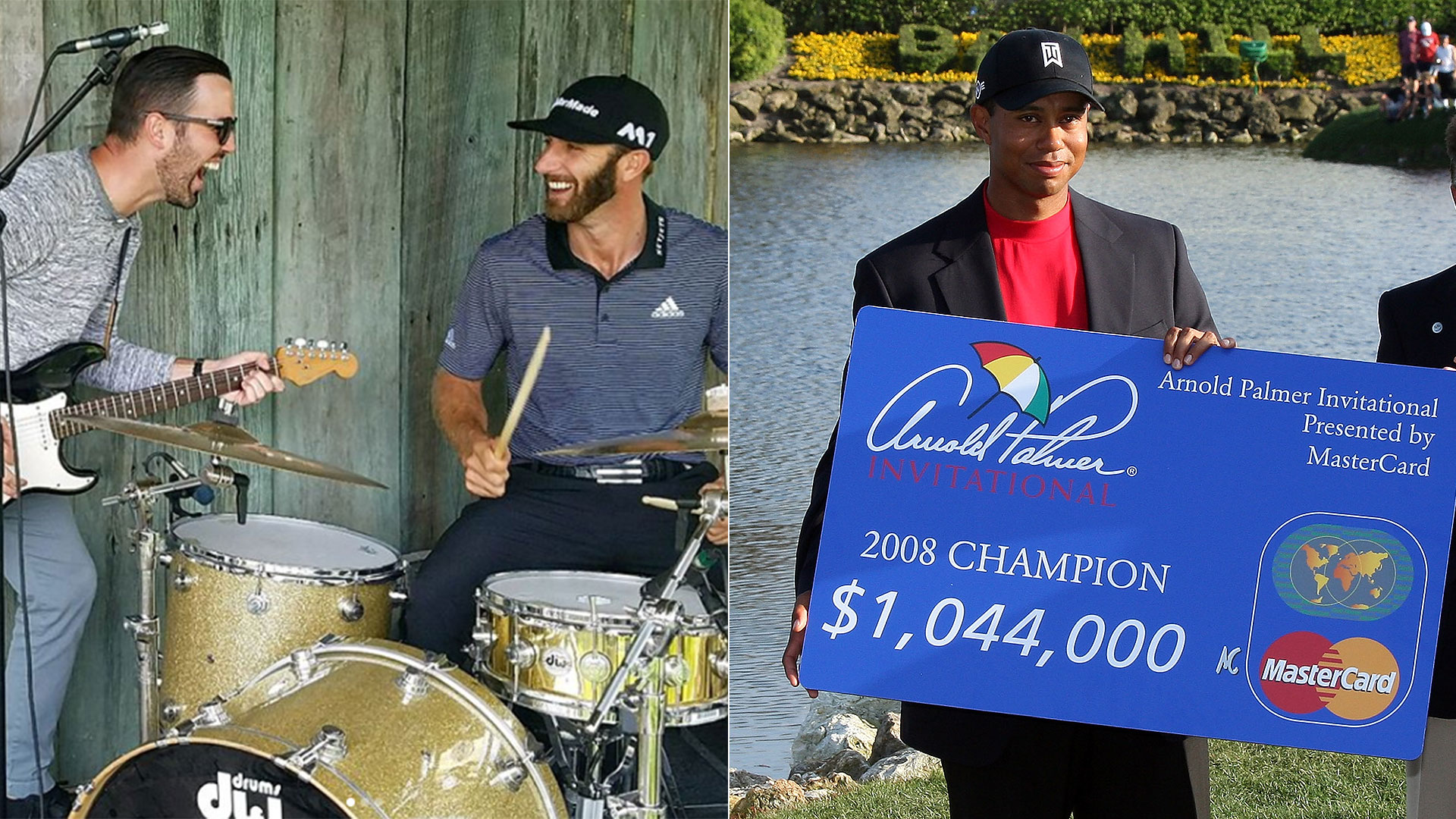 Several PGA Tour superstars, including last week's Northern Trust winner Dustin Johnson, live it up at a pro-am, Floyd Mayweather joined an exclusive club over the weekend with Tiger Woods and Michael Jordan, and some pros voice their displeasure with real and fantasy golf on social media because it's 2017, so of course they did.

The stress of the FedExCup Playoffs seems to be really wearing on the PGA Tour's biggest stars. You can tell because just a day after the first playoff event, DJ, Jordan Spieth, Rickie Fowler and Justin Thomas were among those in attendance at the Silo Ridge Pro-Am, about two hours north of New York City.

The players hung out with, and enjoyed the musical stylings of Kelley James as they teed off. Tough gig, but those pro-ams don't just play themselves.

Amenia, NY - Silo Ridge. Starting a new band called Break Spring w/ @djohnsonpga @jordanspieth & @rickiefowler. We have one more member @justinthomas34, but he's too major for us and wouldn't allow his picture to be taken. @coltknost is our roadie, @budcauley our manager and we've already kicked @patperezgolf out of the group over legal issues. @hud_swafford and @harris_english are the opening rap act for our next tour. Catch us in a city near you in 2027. #SiloRidgeProAm

The pro-am came the day after one of the best finishes this season on the PGA Tour, the final round of The Northern Trust, where Johnson and Spieth traded jabs down the stretch until DJ landed the knockout punch, a monster 341-yard drive on a ridiculous line over water that put him in the driver’s seat on the first playoff hole.

But, of course, there’s a reason we can’t have nice things. That reason is Twitter. A couple of pros - Ian Poulter and Wesley Bryan - took to the social media platform to crush the tournament’s decision to use the 18th hole for the playoff, which they felt gave Johnson a distinct advantage.

Shame @Fedex playoff hole had to be on the worst hole of the golf course.. 18th hole suited 5 guys in the field. Congrats DJ unlucky Jordan pic.twitter.com/ms2WZrfq0X

We'll let Jason Dufner have the last word on this debate.

Incorrect. The 18th on every course is always the best hole, bc it is the last hole..get your facts right.

Well OK then, moving on. Whether or not the Conor McGregor-Floyd Mayweather superfight lived up to the ridiculous hype depends on who you ask, but several pros were up late watching and tweeting about the boxing match which was, at the very least, more interesting than many thought it would be. Ultimately Mayweather won by TKO in the 10th Round, improving his record to 50-0.

As much as a joke as I thought this whole thing was......it is so intriguing and exciting. #mayweather #mcgregor

Dang! Was there ever any doubt!! Was exciting to see both fighters be aggressive the entire fight. #50-0 #MayweatherMacGregor

Watching the @thenotoriousmma and @floydmayweather fight outside with @huzzynyc @sirragsss and @aidanrbutler looking very shifty behind us...

So who's winning the fight tonight? #MayweatherVsMcGregor

One pro's tweet made more noise than others, though, as Kyle Thompson compared what Mayweather stood to earn from the fight compared to how much money Woods has made on the course in his career. It's about triple. You read that correctly. Triple.

Now, the comparison is a little unfair considering that number reflects Mayweather's total take after sponsorship money and pay-per-views are added to his $100 million in guaranteed money. Both men are members of the rare billionaire sports figure club after counting endorsement deals, along with Jordan.

However, it's hard to argue with Thompson's larger point which was basically, "that's a lot of freakin' money for a night's work."

Important PSA with fantasy football season right around the corner: No one cares about your fantasy team outside of your fantasy league, and even that's a stretch. Not one single person. That includes the guys you have on your fantasy team.

So next time you think it would be a good idea to open your mouth and begin speaking about your fantasy team, heed this warning from Graham DeLaet and ... don't do it.

DeLaet had to put a couple of Twitter users in their place after they complained that he withdrew from last week's Northern Trust during the second round with an injury.

I don't care about your fantasy golf. I care about my health. Get a life. https://t.co/kkAZ2bWN69

Because, as I just said, I don't care about your fantasy golf. https://t.co/hcA22fk81k

Fantasy sports is a fun game for you to play. So play with yourself.

There's much debate as to who exactly will make up the U.S. Presidents Cup roster, especially when it comes to Phil Mickelson. But as for another biennial team match, the Ryder Cup, one guy who won't be around, at least in 2018, is Andrew Hughes.

Who, you may asking? Exactly.

Hughes is just some guy who posted a smart-alack response to a European Tour's Facebook post asking how to qualify for the Ryder Cup. And he got an official reply.

Unfortunately for Hughes, he's a 16 handicap so 2018 isn't looking so good for him, but Thomas Bjorn chimed in with a promise to put in a good word in 2020 if he can bring that handicap down a few more strokes.

One player who won't be in the @RyderCupEurope team for France... Andrew Hughes pic.twitter.com/E14MG8XTX4

This Hughes character sounds like a real wildcard. The U.S. squad may want to start scouting him now.

The tone of The Social is generally pretty lighthearted, but there's nothing funny about what's happening in southeast Texas right now.

Hurricane Harvey has caused unprecedented flooding in the area, and while people's safety is the top priority, the golf courses have also taken a hit, and from the looks of things, they may never be the same.

Several photos were shared on Twitter Monday of the Champions Golf Club and the Golf Club of Houston, which hosts the PGA Tour's Houston Open, and the damage is mind-blowing.

This is Champions area.. pic.twitter.com/vmgur5Cegp

The people that have had their lives turned upside down by this storm over the last several days could use all the help they can get. A couple ways you can help out is by donating to the Red Cross here or the Salvation Army here.