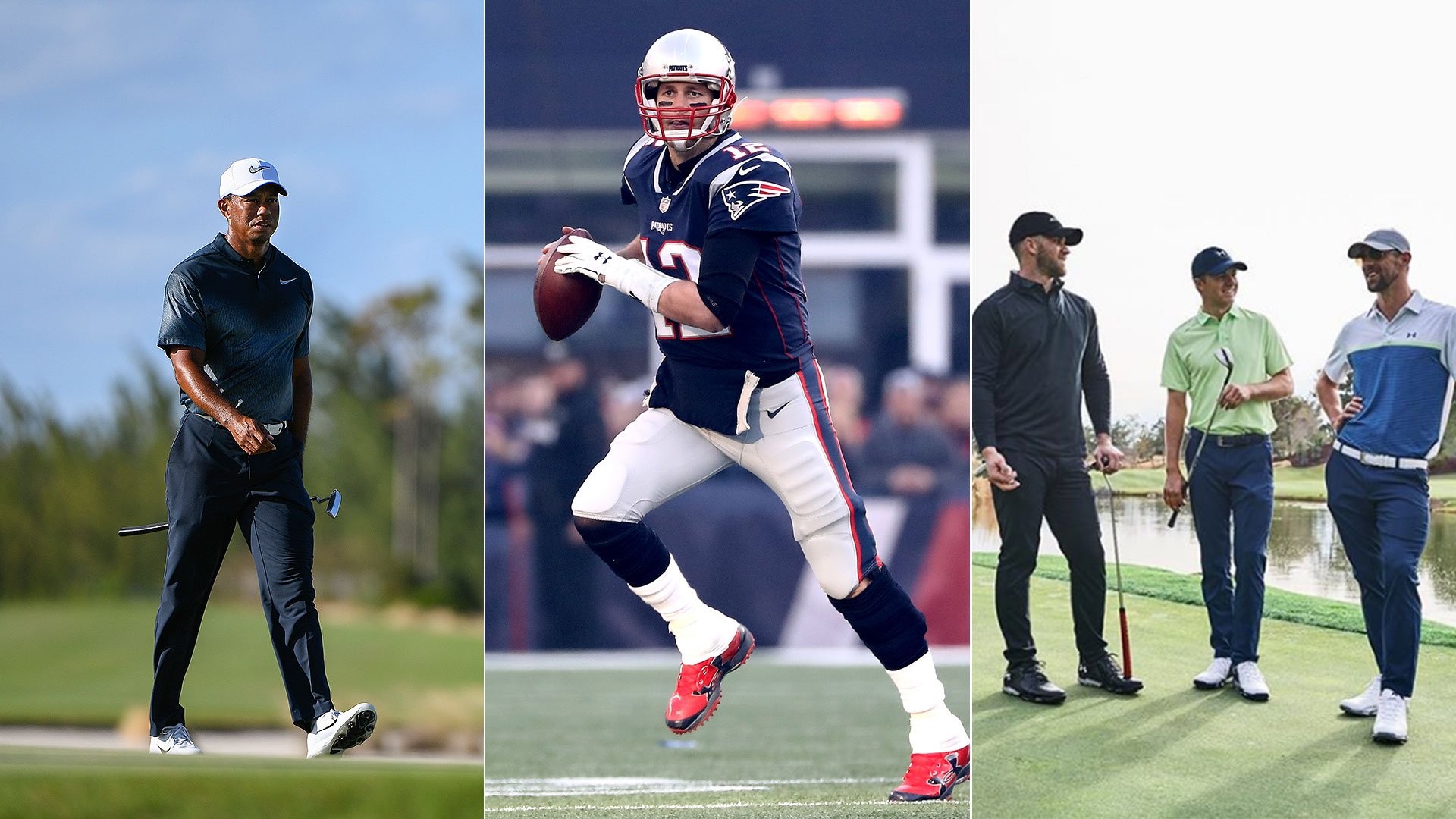 Tom Brady compares himself to Tiger Woods, who coincidentally is returning to the PGA Tour this week, Jordan Spieth hangs out with some decent company and kids these days ruffle some feathers with their friendships.

Well, it’s finally Farmers Insurance Open week and Woods has been spotted practicing for his official return to the PGA Tour on Thursday.

Some thought this day might never come after a 2017 filled with mostly downs for the 14-time major champ.

But as he has taught the golf world time and time again, you just can't count Tiger out.

So even as Jon Rahm attempts to overtake Dustin Johnson for No. 1 in the world this week at Torrey Pines, all eyes will be on one of the greatest we've ever seen do it, even if that guy is ranked No. 647 in the world.

There’s not many who can just offhandedly compare themselves to Tiger, but if anyone gets a pass, it’s Tom Brady.

The 40-year-old New England Patriots quarterback led his team back to the Super Bowl for the second straight year despite playing the AFC title game with a cut on his throwing hand.

When asked about it after the Patriots come-from-behind victory over the Jacksonville Jaguars, Brady answered, “I think it's kind of arrogant to say it bothered me when we had a pretty good game, so I wouldn't say that. It's like when Tiger Woods said, ‘That was my C game’ and he won the tournament.”

Tom Brady, postgame, on wearing the wrap on his hand: “I think it's kind of arrogant to say it bothered me when we had a pretty good game, so I wouldn't say that. It's like when Tiger Woods said, ‘That was my C game’ and he won the tournament.”

So there you have it. A 40-year-old Brady is winning AFC Championships with his C game. Good luck, Eagles; you’re going to need it.

Also, if for some reason you wanted an update on Justin Thomas' life, it's still awesome:

I was thinking we kick @JordanSpieth out and replace you with him... everybody wins! enjoyed yesterday man

Yeah, that's last year's PGA Tour Player of the Year hanging with Cy Young winner Cory Kluber in a suite at the Patriots game and teasing us with a possible #SB2K18 cameo.

This, according to Curtis Strange.

The two-time U.S. Open champ took to Twitter during the CareerBuilder Challenge to vent his frustration regarding the constant chit-chat and friendliness between Rahm and Andrew Landry:

Watching Andrew Landry and Jon Rahm in playoff. Walking off tee talking to each other. Are you kidding me ? Talking at all. ?

@JonRahmpga and Andrew Landry.Hopefully no offense taken on my comment yesterday. You guys are terrific, I’m a huge fan of all players today. Made a adverse comment on U guys talking during playoff.Not for me. A fan.

Never went out of my way to disrupt. Having a chat wasn’t for me,my generation, or before me. Some inside baseball. Honesty.

This, of course, makes sense in theory. But good luck watching golf – or really any sport – from here on out. Sure there will be a few old school guys who buck the trend here and there, but for the most part, it’s really hard to share a private jet/dinners/vacations/(insert awesome thing here) with someone, and then completely turn off the friendship coming down the stretch of a big tournament.

Damn millennials. They ruin everything.

By now you've all seen that poor Philadelphia Eagles fan who lost his battle with a subway station pillar (from multiple angles), so instead here is a video of a man attempting to stand on an egg. Bet you can't guess how that goes.

Tony's gonna stand on an egg

Seriously if you haven't seen the video of that Eagles fan, here's your last chance in this column. You'll be glad you did.

Was the whole thing just a big advertisement for Spieth’s new Under Armour shoe? You bet.

But that doesn’t make the optics of three of the biggest superstar athletes on the planet teeing it up for a round any less awesome.

Off to the next. #Spieth2 #TEAMUA

The trio has three major wins, five All Star Game appearances and 28 Olympic medals between them, and there they were over the weekend just fake laughing for the camera and driving around individual golf carts with their own personalized logos on them.

The crew has started to arrive. @m_phelps00 has officially joined @jordanspieth for the #Spieth2 launch. You never know who will show up next...

When the sun sets, the lights go up @topgolflasvegas. #Spieth2 #TeamUA

Just guys being dudes. Nothing better than that.

Matt Kuchar. Still good at golf. Still overly polite. This according to European Tour pro Eddie Pepperell who had the privilege of hitting on the range next to Kuuuuuch in Abu Dhabi last week.

Hit balls next to Kuchar yesterday and two very Matt Kuchar things happened; He didn’t miss a shot, and when he let out a fart he went, “oopsies.”

That image is burned into your brain forever now, thanks Eddie. From now on when you think of Kuchar you're going to think of those Sketches ads and "oopsies."

Which, I suppose is better than a, "Did you get that?"

Blayne Barber's caddie, Cory Gilmer, collapsed and hit his head while at a restaurant at the Sony Open and has been mostly unconscious in the neurological intensive care unit ever since.

The outpouring of love and support from the golf community has been overwhelming on social media, and a GoFundMe page has been set up to help with the mounting medical costs for Gilmer and his family.

Check out the link below for more info or to donate to a worthy cause:

Many people have asked how to help Cory and his family during his time in Hawaii. We set up a GoFundMe page! Check it out and give! Thank you all for the prayers and support.https://t.co/4frdZN4vrQ