The Social: Put 'er there, partner 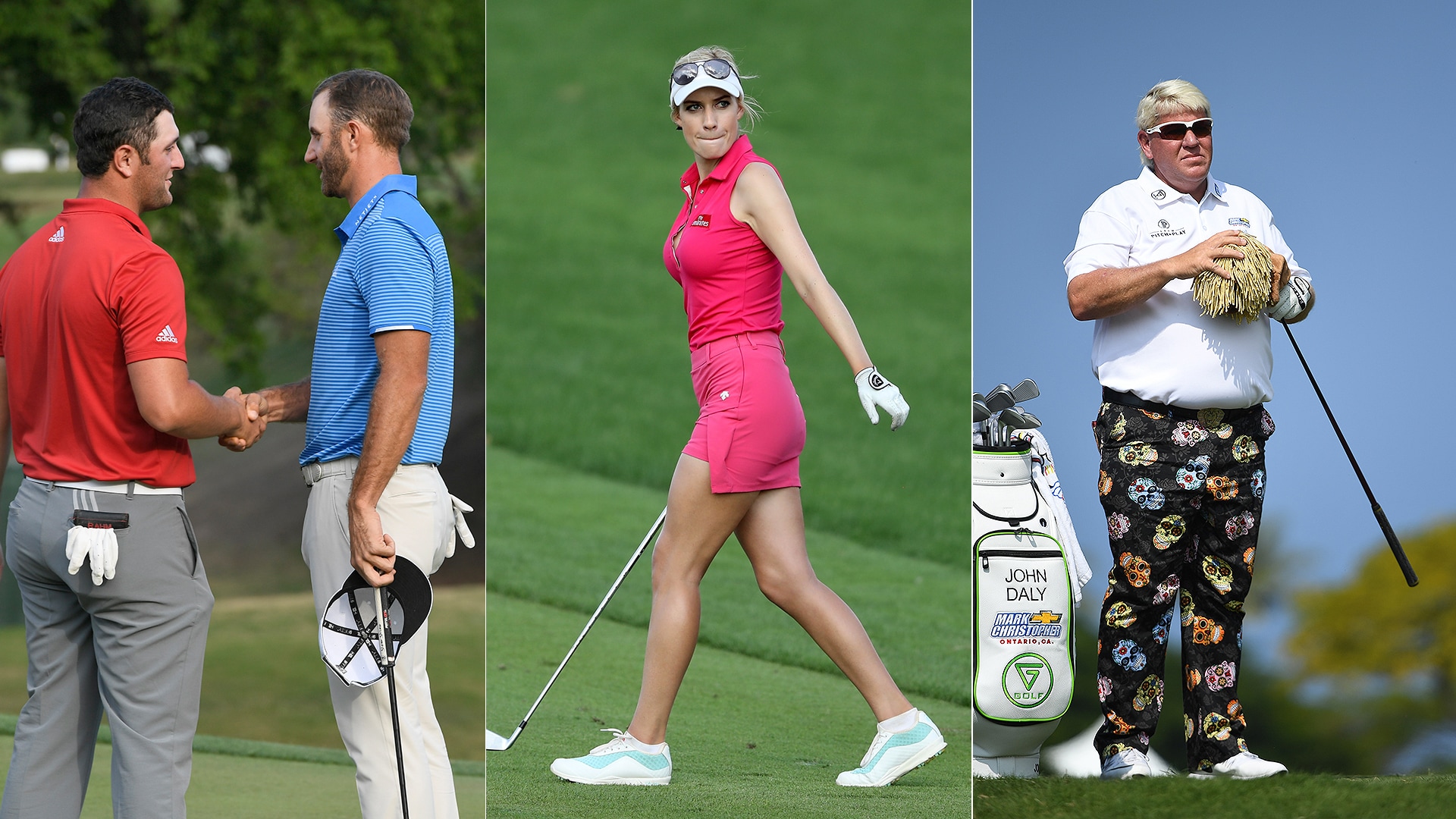 Jon Rahm's wish for a rematch with a familiar foe came true, but Paige Spiranac and John Daly are looking for new playing partners. All that and more in The Social.

Three weeks ago, Dustin Johnson topped (among others) Jon Rahm to win the WGC-Mexico Championship on a wild Sunday which saw the upstart rookie briefly grab the lead at one point.

Rahm took to Twitter shortly afterward to congratulate DJ and ask for a rematch in the near future. He said he wouldn't mind it being at Augusta National, but hey, life comes at you fast. So the 22-year-old got his wish a couple weeks early, going head-to-head once again with the world No. 1 on Sunday in the championship match of the WGC-Dell Technologies Match Play.

Great playing @DJohnsonPGA. I look forward to a Sunday rematch soon. I wouldn't mind if it happens at a place called Augusta National.

Well it might be a couple weeks early, but this will be Fun! Vamos! https://t.co/ctDc6OHq0K

Once again, DJ came out on top. And once again, Rahm made it close. But it's interesting to note that this time, his congratulatory tweet didn't include a call for a re-rematch.

Great performance by @DJohnsonPGA for the WIN this week. I enjoyed the battle out there and will keep trying to get better. Houston bound!

Rahm will get his victories, no doubt. But they'll probably come a little easier when the best player in the world isn't standing in his way.

On a side note, get this man a blue check mark Twitter, he's at least good enough for that.

Grayson Murray has opinions, and luckily for us, he's not afraid to share them.

Last week during the WGC-Match Play, the rookie responded to a tweet from fellow pro Kelly Kraft about the perception of Asian and European Tour players rising quickly through the rankings and qualifying for WGC and major events more easily than those grinding it out on the PGA Tour.

It's amazing to me how fast some of the Asian Tour/ Euro tour guys rise in the world golf rankings.

Let's go play over there and then we will be in every major and WGC event the rest of our lives! https://t.co/HJRlcdl6TE

It got plenty of response from the Twittersphere, and shocker, it wasn't all positive.

@GraysonMurray @chambleebrandel @kkraft11 typical American mindset. Golf does exist outside your borders. Some players are quite good too..

@GraysonMurray @chambleebrandel nice! I was looking for some new least favorite golfers. Here are 2 in one thread! KK and GM blow.

@GraysonMurray you remind me of this pic.twitter.com/P9lr6uMMk7

The aforementioned Murray made headlines a week ago when he asked model Lindsey Pelas to caddie for him in the Masters Par 3 Contest, and she accepted, provided, you know, that he's actually in the field. A tall task considering he has to win the Shell Houston Open this week.

But that story got people talking, and it didn't take long for golf's It Girl, Paige Spiranac, to reach out with an offer for golf lessons.

@LindseyPelas let me know if you want some golf lessons! ☺️

Ms. Pelas, as she likes to do with propositions from random members of the golf community who she doesn't know, accepted without much hesitation.

People seemed to like the idea. Dare we say, even loved it.

@PaigeSpiranac @LindseyPelas if this was recorded and uploaded online, the internet would break.

Just a good boy and a hockey rink. What more could you ask for out of this section?

While Spiranac and Pelas were working on their dastardly plan to break the Internet, another dynamic duo were busy playing one of the world's most iconic golf courses.

Jordan Spieth and Tom Brady played Augusta National and posed for a picture on the par-3 12th, a hole you may recall, has given Spieth a little trouble in the past. But I guess even a trip down that particular memory lane is better than dealing with a case of the Mondays like all you regular Joes. It's unclear what their on-course conversation entailed, but if Spieth wanted to talk about successful comebacks, he picked the right playing partner.

As for a bonus dream twosome - How about John Daly and The Rock?

Hey, it could happen. After Dwayne "The Rock" Johnson posted an Instagram photo claiming that he hit a drive 490 yards, leave it up to John Daly to call him out, because no matter how big his muscles are, of course The Rock didn't hit a ball almost 500 yards.

The world record longest drive is 515 yards set in 1974. My drive here measured an estimated 490 yards by the scientists holding the rulers. I failed math when I was a kid, but I think that's kinda close. One fun day I will break the world record. Great day on the links shooting scenes for our HBO's #Ballers. Subsequently, I also hit two other great balls... when I stepped on a rake. Ok, no more bullshit haha.. back to work. Have a productive day. #OnSet #Ballers #LasVegas #TheGolfingBeast Big shout out to my bud and the man himself @jordanspieth for my gear

Daly also dropped this gem of a line, "I don't work out, I put out," and said he'd like to play golf with the "Baywatch" star.

Well, as he tends to do, JD won The Rock over, and basically got him to fess up, so maybe we'll see them teeing it up together (possibly shirtless since they're both so comfortable with their bodies?) sometime in the future.

Ha luv this from the man himself @PGA_JohnDaly. Well it looked like about 490 yards to me, but hell Im an optimist and always round uphttps://t.co/daUHCoDyOv

Not sure if any golf networks out there are looking for analysts, but if there are any openings, we found the man for the job.

William McGirt took his precious time with this short MISSED putt at the WGC-Match Play, but that gave us the opportunity to hear some great commentary from one Twitter user, who is probably up for a Sports Emmy Award after this incredible rant.

Pathetic. Watch this? All to miss a putt! This should not be allowed! Seriously man!pic.twitter.com/ZUajLmDQCP

No, but seriously. Gary, you up?