The Social: Playing nice after The Players 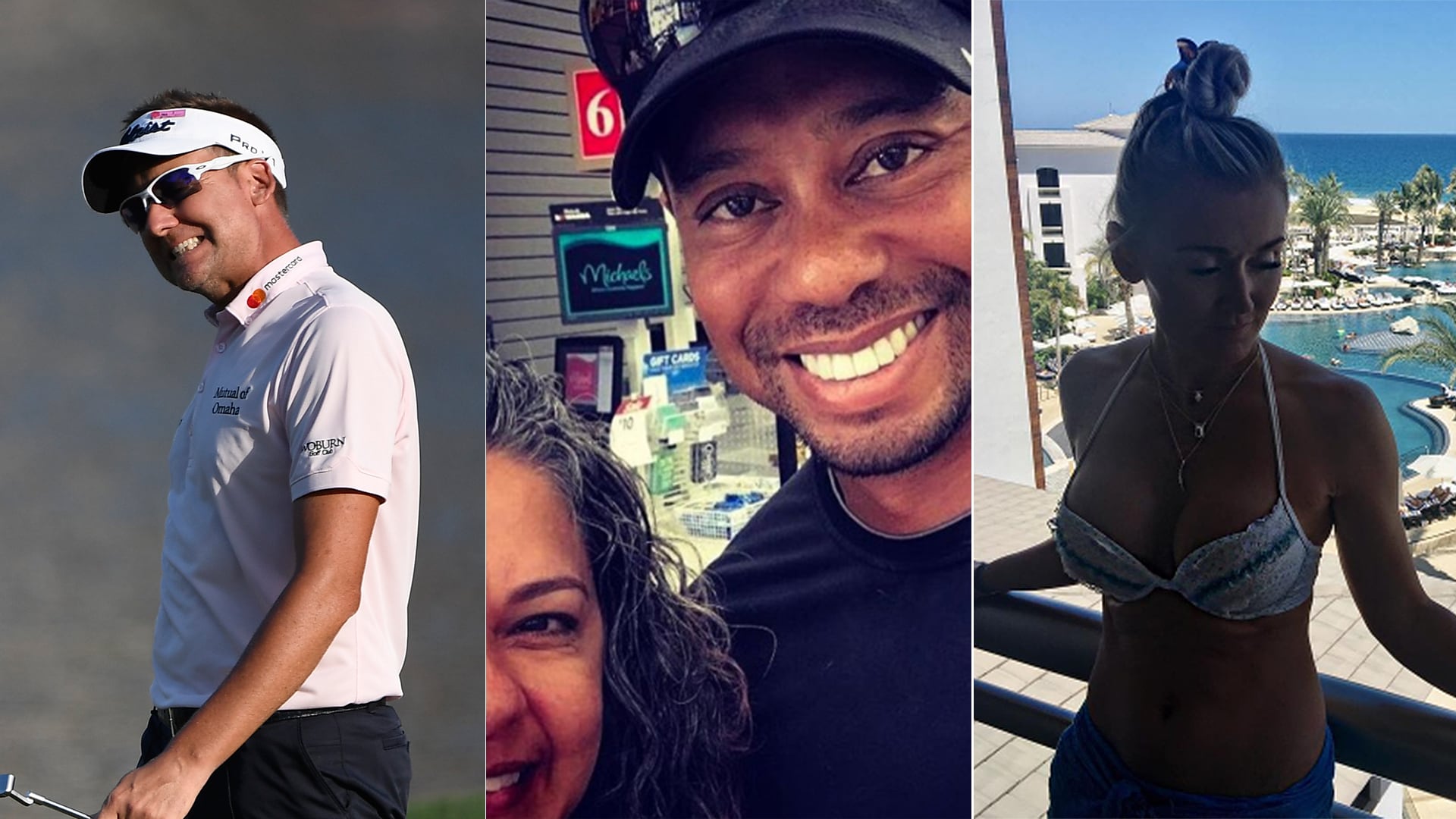 Ian Poulter fires back after being criticized (shocker!), there was a Tiger Woods sighting and it wouldn’t be a week in golf if someone wasn’t on vacation. All that and more in this edition of The Social.

Three weeks after losing his PGA Tour card and then getting it back because of a points miscalculation, Ian Poulter found himself in a position to win The Players Championship late on Sunday.

However, his play down wasn't his absolute best and he eventually finished in a tie for second, leaving some, including Golf Channel analyst Brandel Chamblee, to openly question if the Englishman was playing for the win or playing for points and status, especially given his volatile Tour card situation.

This is going to shock you, but someone criticizing his play did not sit well with Poults, and he hit back, even going so far as to (gasp) use the dreaded A-word.

Sorry to disappoint, I can only dream of being as good as Brandel.. it's clearly very easy sitting on your arse... thanks for the support. https://t.co/hK8rs8NcXW

Poulter eventually figured out he was blocked by Chamblee and the spat died a quiet, fairly amicable death.

Not the biggest feud on the Poulter scale, but it's probably safe to say these two probably won't be exchanging Christmas cards this year.

For the record, I blocked IJP many years ago, not last night. And I enjoy his golf, cool swing, good player .. usually fun to watch. Cheers. https://t.co/l9PQSGlRYP

On a related note: Poulter calling someone out for blocking him on Twitter. That’s rich. I get it … Poulter isn’t always the easiest guy to root for. He’s not exactly relatable, you know, with the Ferraris and the nannies and the trying to get anyone who doesn’t like him fired from their job.

But check out these bros on the 18th hole at TPC Sawgrass on Sunday, who just happened to be standing where Poulter shanked his shot right of the fairway.

From way right to extremely tight.

The ups and downs of golf for @IanJamesPoulter.

Those two dudes were rooting for his ball to get out of bounds harder than anyone’s rooted for anything in the history of rooting.

The one guy got airborne.

So yeah, Poulter’s not exaggerating when he says he’s got some haters out there.

We haven’t seen much of Tiger Woods since he underwent yet another back surgery last month.

So it’s nice to know that while his game is on the shelf, he’s still out in his community getting all his arts and crafts needs taken care of at his local Michaels.

SPOTTED: For the first time since his back surgery, Tiger Woods was photographed yesterday inside a local Michaels store in South Florida. The back must be feeling a bit better. Sam or Charlie must have needed some school supplies.via Twitter user (MeghanPatrice). #TW #tiger #tigerwoods #goat #pga #pgatour #golf #f4f #l4l

If he needs somewhere to put all those supplies, I think I know where he can find a spare pocket or two.

Golf ball in the wall, eh? Ok now you're talking my language.

You want to bring in a third golf ball? I'm thinking maybe four.

If a week in golf goes by and someone doesn’t take some sort of tropical vacation, did it actually happen?

It looked like a good time if you’re in to sun-soaked resorts on the beach and tacos in the pool.

If you’re not in to those things, well … that sounds like a you problem.

Also, if her posts are to be believed, she’s never leaving paradise so don’t be shocked if you see her in this section again next week, and every week thereafter.

Si Woo Kim became the youngest winner in the history of The Players on Sunday at just 21 years old, and cashed a $1.9 million paycheck in the process.

And while that kind of money might immediately go to some 21-year-old's heads, Kim quietly left town on a commercial airline ... in a middle seat ... in coach.

You never know who you will sit next to on a flight to Atlanta. 2017 The Players Champion. @THEPLAYERSChamp pic.twitter.com/X5CvX5kUbf

Si Woo Kim. A man of the people.

It was a rough week for members of the animal kingdom venturing on to golf courses.

First, we have this fish, who probably thought it was a very big fish, until it met this alligator on a South Florida course. He gone.

Dad was not impressed with my National Geographic skills

Then there was this bird, who was just minding its own business, enjoying its day and ability to fly and … wham. He gone.

And lastly, there was this massive snake that was slithering around a course in South Africa. It didn’t kill anything (while the video was rolling), but you got to eat something to grow that big. This super smart guy touching the snake was just begging to be its next meal.