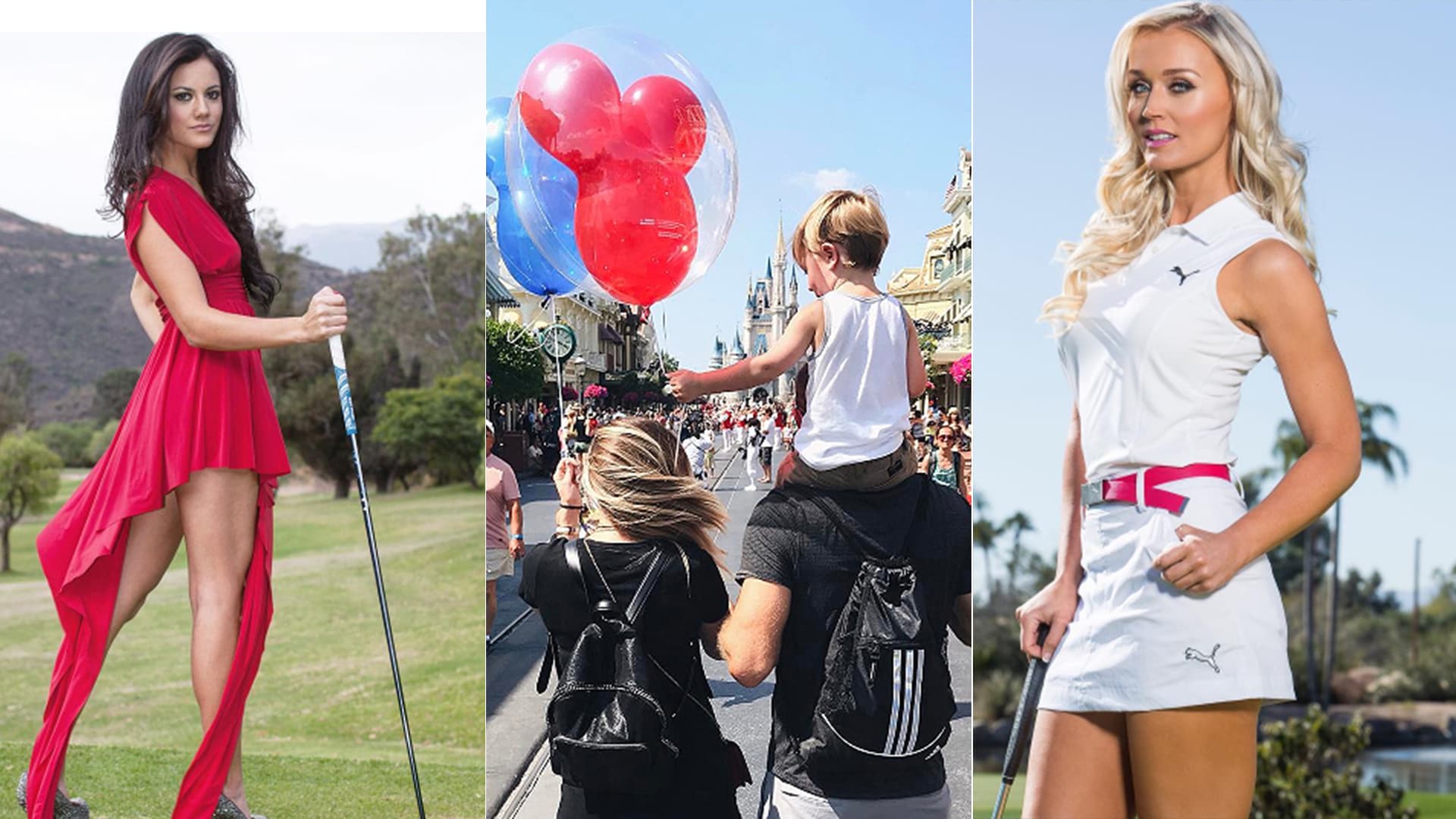 Dustin Johnson and Paulina Gretzky ditch the beach for a family vacation, a social media starlet will get an LPGA shot thanks to the help of Twitter, and Andrew "Beef" Johnston gets a new best friend in New Orleans. All that and more in this edition of The Social.

With a kid in tow, sometimes you have to switch up your routine. Packing extra diapers, seeing the animated movie instead of the R-rated thriller, pointing your private jet in the direction of a more kid-friendly vacation spot - those kinds of normal-people things.

That was the case this past week for totally regular parents Dustin Johnson and Paulina Gretzky, who passed on the typical tropical vacation they’ve been known to take in favor of a trip to Disney World with their son, Tatum.

The pictures lacked a certain sizzle we've become accustomed to seeing from the world No. 1 and his fiancée, but hey, we got DJ on the "Dumbo" ride instead. What more can you really ask for?

Dustin Johnson appears to be sitting upright on Dumbo at Disney World. Good news for his back. @DJohnsonPGA @PaulinaGretzky pic.twitter.com/u8ISOMGpcs

A strong social media presence can get you a lot these days ... clothes from potential sponsors, protein powder, more nasty comments than you can count, and apparently a spot in an LPGA event.

Next month's ShopRite Classic launched a Twitter poll Monday, leaving its final sponsor exemption up to votes from the general public.

Golf Channel’s Blair O’Neal, India’s Sharmila Nicollet, Scotland’s Carly Booth and Bolivia’s Susan Benavides were the four ladies chosen for the poll after being identified by MVP Index, a sports social media tracking firm, as the top candidates not named Paige Spiranac, who opted not to participate.

Not exactly sure what the MVP Index formula is, but there’s a good chance it starts with a regular old set of eyeballs.

We're just glad there's no write-in option. If the Internet has taught us anything, it's that Golfy McGolfface would run away with this thing if given the opportunity.

Jonas Blixt and Cameron Smith probably had the most fun as partners at last week’s Zurich Classic of New Orleans, considering they came away with the victory, and winning is fun. But right behind them had to be the 1-2 punch of Andrew “Beef” Johnston and Kyle Reifers, who finished T-29 and may have become best friends in the process.

The duo gave themselves a cool nickname, ate beef jerky out of each other’s mouths, Photoshopped weird pictures together for Instagram. They did basically everything short of sword fighting their way through a fancy gala wearing orange and blue tuxedos.

Then again, their evolution into Lloyd Christmas and Harry Dunne appears well on its way:

So this is how my partner this week gets to the course. No courtesy cars needed@kylereiferspga

Heard that baby gets 70 miles to the gallon.

Slow play dominated the weekend in golf, with both the PGA and European Tours handing out penalties. But it was no more noticeable than during the final round of the Volunteers of America Texas Shootout, where Cristie Kerr and Haru Nomura went to SIX painfully-slow sudden death playoff holes before a winner was decided.

So its Monday morning, did Cristie Kerr hit her putt on 18 yet or we will need to wait till Tuesday....#humanraindelay

Feel bad for the LPGA. They got a bunch of extra eyeballs...and then Kerr slow-played the momentum with a monotonous drop.

The year is 2032. Global elections are held via Twitter polls, LeBron Jr. eyes a 3rd title and Kerr & Nomura head to the 116th extra hole.

I think an 8th continent just formed during this @LPGA playoff...

I will passionately root against Christie Kerr for rest of her career after this.

Miles past the point of being unsportswomanlike. Gross.

Kerr, who ended up (eventually) losing the playoff, was aware of the glacial pace, because she took to Twitter herself to apologize the next day.

Sorry everyone for the slow play yesterday the conditions were incredibly tough and that 18th hole is very difficult. Very tricky w 40mph

Thank you to all my fans out there I love you and I am always appreciate of of your support no matter what!!! #kerrnation

The Zurich Classic wasn’t the only team event that went down last week in New Orleans.

Before the tournament started, several players competed in a "Family Feud" knockoff at the Zurich pro-am party that looked like a lot of fun.

We’re not sure which side answered this question, but they nailed it.

The question was, Which Tour player is mostly likely to be found on Bourbon St.pic.twitter.com/1fPHxO0b5D

While there’s no actual video of the event, this is probably close enough:

Seriously, don't know why anyone leaves their computer with such good money-making opportunities right at their fingertips. Real jobs are for suckers.