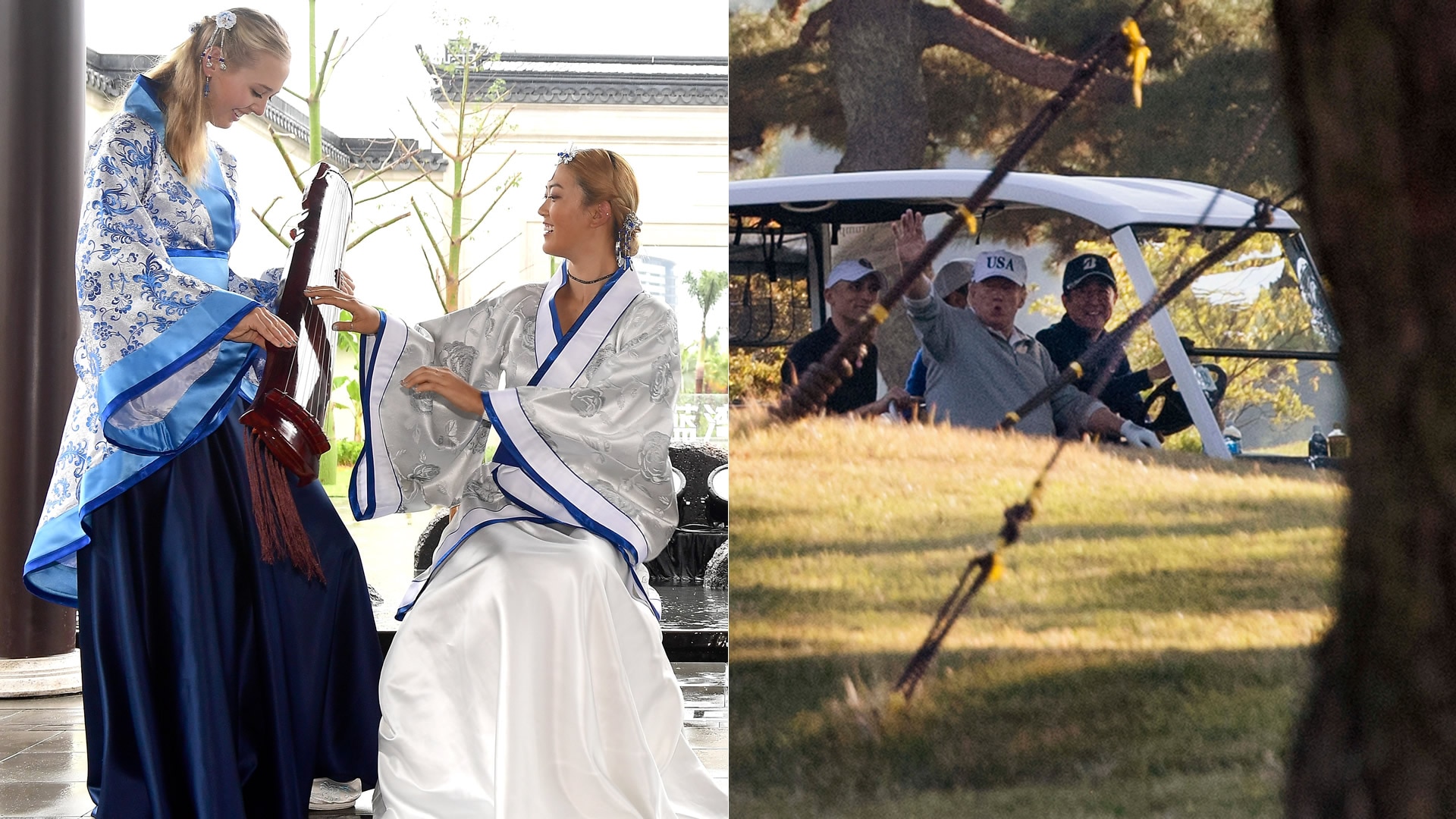 We’ve heard a lot about Trump’s golf game since he was elected President of the United States, but we haven’t seen much – good or bad – after he took office.

That all changed in the past week, when we got not one, but two glimpses of him in action.

Trump tweeted a video of himself hitting a shot while playing golf with Japan’s Prime Minister Shinzō Abe and world No. 4 Hideki Matsuyama during his trip to Asia over the weekend.

This came on the heels of NBC News cameras catching him picking up a putt while it was still rolling about a week earlier.

The reasons for that putt being picked up are debatable, but with well-struck irons and lengthy "gimmes" on tape, we're suddenly getting a much better picture of that 73 Senator Lindsey Graham insists he saw Trump shoot last month.

Woods hasn't played a sport professionally in almost a year, but he's certainly watched his fair share in person while he's been out injured.

Woods, who will be back next month at his Hero World Challenge in the Bahamas, was at it again on Sunday, taking in the Oakland Raiders game against the Miami Dolphins.

A quick side note – can we talk about this guy's jersey collection for a second? Flashing a Plunkett and Jackie Robinson in back-to-back weeks?

‪I last went to the #WorldSeries with my Dad in 1988, also game 2. Amazing to be back almost 30 years later. Let’s go Dodgers!‬

We sure Tiger isn't moonlighting as a '90s rapper? Because if he is, MC Beef may be available for a collaboration.

#tbt to @beefgolf rocking his new shades, SnapBack and spitting some bars at the uspga #stateside #legend

Henrik Stenson has withdrawn from the final two events in the European Tour's Race to Dubai, citing a rib injury that many thought he sustained during a promotional photo shoot at the WGC-HSBC Champions last month in which he was hoisted in the air by a harness while donning a cape.

"I'm not Superman even though certain people thought I was Superman," Stenson said Sunday after finishing T-35 at the Turkish Airlines Open.

Although he later disputed that quote was about the photo shoot, the ladies at the Blue Bay LPGA in China seemed to heed his warning anyway. Michelle Wie, Jessica Korda and Sandra Gal participated in an interesting photo shoot of their own this week but opted not to fly too close to the sun on the wings of pastrami.

Take it from Hennie Stennie, kids. No matter where life takes you, always stay grounded.

Sometimes you get that fancy toy you've not-so secretly wanted or a shiny new piece of jewelry you've been dropping hints about for months.

Other years you get something a little more practical, like a vacuum cleaner or ... in Angie Watson's case, surgery.

Bubba Watson showed off the present he got for his wife on social media Monday, and it looked a little unpleasant.

Got Angie 4 screws for her birthday! Thanks everyone for the thoughts & prayers!! #BasketballProblems #SheIsTougherThanMe #KneeProblems

Bubba posted an x-ray of his wife's knee with four screws in it and alluded to the fact that it was a basketball-related injury. Angie played basketball at the University of Georgia where she met her husband.

The Watsons. Just the latest example that love isn't dead - but sometimes it's very painful.

We've all been there. Even those of us with a gold jacket to their name have wanted to launch their club into outer space when things don't go your way.

Well, Australian pro Terry Pilkadaris gave into temptation during a first-round 73 at the Asian Tour’s Panasonic Open India, throwing his putter into the woods after missing a putt on the 17th hole.

Hard to think of a more satisfying feeling in golf ... at least until the inevitable walk of shame.

Club throwing advice with Ron. Think we have a new segment on our hands.