The Social: Aside from golf, Prez Cup entertained 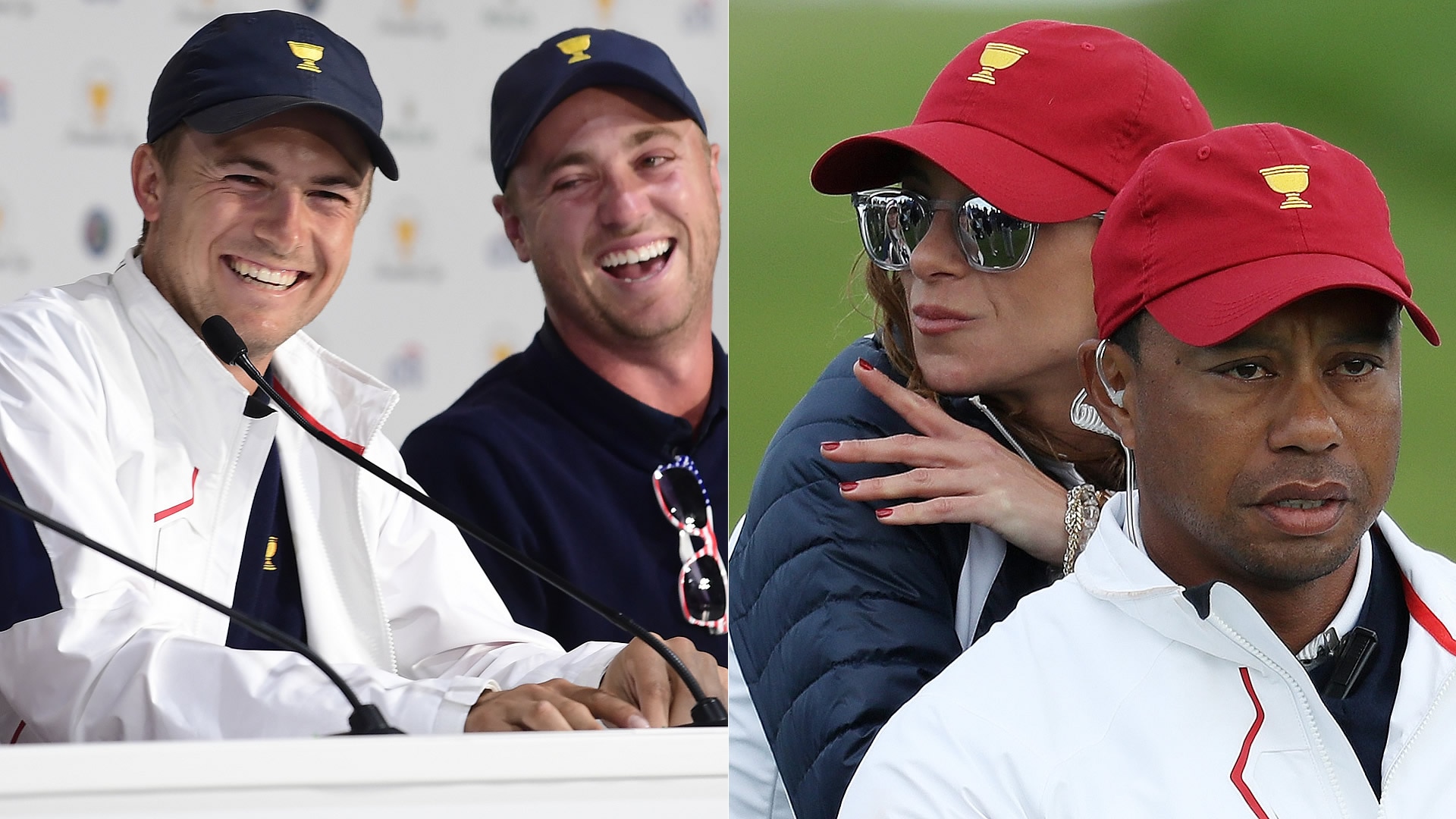 The real highlights from the U.S. Presidents Cup victory come after the event had concluded, the WAGs (maybe even Tiger's?) show up in a big way and Gary Player never ceases to amaze.

All that and more in this week's The Social.

By all accounts, the Presidents Cup was a blowout from start to finish, culminating in the Americans' seventh straight win of the event and matching the third-largest margin of victory over the Internationals.

But if any fans out there stuck it out til the bitter end, they were treated to some great theatrics from the winning squad ... in the media center.

With the result basically wrapped up before Sunday singles began, the champagne celebration started early and it was in full swing by the time the U.S. players sat down as a team with the media - which led to some classic moments, such as Jordan Spieth and Dustin Johnson belting out their best rendition of “Si Woo, Si Woo, shaking that ass," a reference to the song American fans used in good fun to try and rattle International team member and Presidents Cup rookie Si Woo Kim.

But that wasn't the only fun the Americans had after their 19-11 win. While in the past Phil Mickelson has seemed more-than able and willing to make headlines in winning or losing team competition news conferences, on Sunday it was the U.S. squad's eldest statesmen who was the butt of a few jokes, despite posting a 3-0-1 record.

Mickelson won his Sunday singles match, but endured his share of slings/arrows in the post-match press conference . . . from DJ. pic.twitter.com/GqibrpACUp

People can debate as much as they want about the Presidents Cup's lack-of "competiton" and what the best course of action is moving forward with an event that some say has lost its luster.

But do you want to know how you know it's still a big deal?

The WAGs showed up. Big time.

The annual "Take Your Significant Other to Work Week" was a great success, as usual, with all the fan-favorites showing up to cheer on their men.

Had a Brunch of fun honoring the First Lady's today! @nchcf

Catch @jasondayofficial tonight on @fallontonight ... soooo fun. He and @jordanspieth surprised some awesome little golfers. And Annie and I got depressed bc we JUST missed @miloanthonyventimiglia but anyway.... #presidentscup2017 #nyc #jimmyfallon

There was one embrace in particular at Liberty National that seemed to catch people's attention, and we're not talking about apparent BFFs Tiger Woods and Phil Mickelson hugging out the victory.

No, someone else was spotted getting even cozier with Woods.

Erica Herman, 33, who was once listed as the general manager of a Woods-branded pop-up restaurant at the Genesis Open, was snuggling up with Tiger all week, and while Woods neither confirmed nor denied the two were an item, they don't exactly look like, "just friends."

Of course, if they were officially dating, we'd know. Because we would have seen an over-the-top synchronized Facebook post complete with professional photos by now.

Is there anything Gary Player can't do?

The 81-year-old crushes his work-outs, does backflips off of boats and, evidently, can cut a rug.

On Monday at one of his Gary Player Invitational events in New York, which raise money for underprivileged children and communities worldwide, Player found himself on the dance floor and he did not disappoint.

From Rory McIlroy to Phil Mickelson, there's been plenty of talk about the firing and hiring of caddies this year.

But there were a couple of caddie stories this week that were a little less serious in tone, which was nice considering we're talking about a job where the main duty is literally just carrying a bag.

First it was Sergio Garcia making a fan's day month year life by letting him loop during the Wednesday pro-am of the British Masters.

This particular fan, Mark Johnson, is what one might call "persistent."

This payoff came after he tweeted Garcia for 206 straight days with this particular request.

206 times he asked Sergio to let him caddie for him...

The second caddie story comes from the boys behind the SB2K18 CADDIES Twitter account. They want to, you guessed it, caddie for SB2K18.

The guys do make a compelling case for Rickie Fowler, Jordan Spieth, Justin Thomas and Smylie Kaufman to look over. They offer caddie races, dance-offs, sunscreen application and cocktail service.

Best of luck to Willie, Juice, Hammer and Mountain. And remember, if you get turned down the first time, just ask another 205 times. That will definitely show them you're serious and get you the job ... or a restraining order. Only one way to find out.

Good point. Maybe those guys will take this loss to heart and try harder to make the International Presidents Cup team in a couple years.