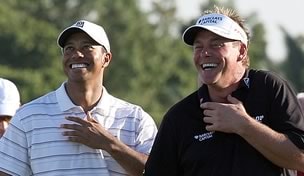 When Tiger Woods returned to competitive golf at last year’s Masters Tournament after a lengthy self-imposed hiatus, it was speculated that the lords of Augusta National would ease him back into competition by grouping him with a few buddies.

Too bad the PGA Tour didn’t learn from that decision.

Golf Channel learned on Monday that in his first appearance since withdrawing from The Players Championship three months ago, Woods will be paired with Darren Clarke during the first two rounds of this week’s WGC-Bridgestone Invitational.

Not only are the two men very good friends, but their friendship has made headlines recently, as Clarke acknowledged he received text messages from Woods offering advice prior to the final round of last month’s Open Championship and congratulations after his victory.

Which means this pairing can’t be seen as anything but pandering to Tiger in his return to competition.

With “featured groupings” sprinkled into the opening two rounds at every PGA Tour-sanctioned event this year, the folks in Ponte Vedra Beach, Fla., offices have finally conceded that not all tee times are of the computer-generated, random variety. Rather than specifically place Woods with a player with whom he has little prior relationship, though, officials have offered him a favorable partner in longtime buddy Clarke.

How tight are they? In a 2007 interview with Golf Digest magazine, Clarke said of Woods: “He's a good guy. A real good guy. With everything he's achieved, he hasn't changed since the first day I met him. He called me ‘Double F’ when we first met, and he still does.” As to what that nickname stood for, he claimed, “There will be asterisks all over the place if you print this.”

There’s nothing wrong with players competing alongside buddies – and with so many close relationships throughout the PGA Tour, it would be impossible to weed out any such pairings on Thursdays and Fridays.

In this situation, though, with all eyes of the golf world affixed squarely on Woods, the PGA Tour made a poor choice in pairing him with a friend.

Of course, officials could have gone the other way, too.

The most enticing potential partner for Woods would have been Adam Scott, who now has ex-Tiger caddie Steve Williams on the bag full-time. Such a matchup would have brought fireworks to Firestone, as the two men who were once so close are apparently no longer on speaking terms.

Even though interest in the event may have been sparked by such a pairing, it shouldn’t come as a surprise that the PGA Tour balked at placing them together.

Nor should it be a shock that Woods didn’t draw golf’s newest superstar in Rory McIlroy, or his career-long rival in Phil Mickelson, or his vengeful enemy in Rory Sabbatini.

Instead, the PGA Tour should have taken a cue from the folks at Augusta by placing Woods in a pairing that serves no competitive advantage nor disadvantage; one that would be neither socially acceptable nor unacceptable from Tiger himself.

The way it is now, it appears as if there’s been a wink-wink, nod-nod agreement in place. As a way of basically thanking Woods for returning at one of its premier events, he was offered a cozy pairing that should help his comfortability level.

This decision will set well with both Woods and Clarke this week, but it should remain more than a bit perplexing for the rest of us.