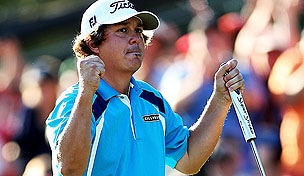 If you weren’t already a fan of Jason Dufner – if he hadn’t won you over with his everyman demeanor and his perpetual waggles and his sublime ball-striking – the following story should be enough to finally do the trick.

It all starts with a guy named Rob Labritz. Even if you don’t recognize the name, you likely remember his YouTube moment. He’s the longtime New York club professional who holed a wedge shot from 95 yards at the PGA Professional National Championship to collect the 20th and final spot in the field at this year’s PGA Championship.

Labritz (at far right above) is no newbie to the glitz and glamour of the big-time. This was his fourth appearance in the year’s final major and he’s long owned connections all over the golf world. It was through one of these connections, St. John’s University coach Frank Darby, that Labritz found himself in a juicy practice round match on Tuesday at Oak Hill Country Club last month.

Darby set up Labritz with Keegan Bradley, one of his former players and, of course, a former PGA champion. The two of them would prepare for the tournament by playing a match against heavyweights Dufner and Dustin Johnson.

At promptly 8:30 a.m. Tuesday morning, the foursome stood on the first tee at the famed venue and playfully discussed the day’s wager.

“Dufner and Keegan started talking about the bet,” recounts Labritz, the director of golf at GlenArbor Golf Club in Bedford Hills, N.Y. “Dufner says, ‘What are we playing for? A hundred thousand? Two hundred thousand?’ He’s like, ‘Keegan, what did you make, $7 million last year? I thought you wanted to play for some cash.’”

Labritz laughs at the recollection, adding there was more than a little sarcastic embellishment laced in that offer.

“I said, ‘Guys, that’s a little out of my price range. I had to cancel two ladies clinics and a junior clinic just to be here today.’ So we played for a $500 closeout.”

It didn’t start well for the club pro. He and Bradley combined for a best ball score of par on each of the first five holes. Dufner and Johnson countered with birdies on all five, quickly taking a 5-up lead.

Labritz finally birdied the eighth hole, but his team was still 6-down. A birdie by Johnson on the ninth extended the lead to 7 at the turn. Even after birdies from Labritz on 10, 11 and 13 and one from Bradley on 14, they found themselves 4-down with four to play. On the 16th tee, they pressed for half the amount, with Bradley taking the banter to another level.

“Keegan goes, ‘Hey Rob, did I ever tell you this story? I was 4 down with five to go and I won this tournament,’” Labritz says, recalling Bradley’s needling of Dufner about the PGA Championship finish from two years earlier. “Dufner goes, ‘Hey, it ain’t going to happen that way this week.’”

After a halve on the final hole pushed a second press, Labritz and Bradley found themselves $750 in the hole – which was a slight problem for the club pro.

“I didn’t have $750 in my wallet, so I went into the locker, got my checkbook out and wrote a check to Dufner. I left it in his locker.”

In the memo section of the check, he wrote:

SORRY FOR THE CHECK + THX FOR THE WHOOPIN. All of which became even more amazing five days later, when Dufner posted a final-round 68 to claim his first major championship title.

Suddenly that $750 check from the Tuesday match didn’t quite mean as much. So rather than cashing it, Dufner called a late audible following the victory.

“A few days after I missed the cut, I got this letter in the mail,” Labritz explains. “It was written out to me in cursive.”

The letter was from Dufner. It included Labritz’s check with the word “VOID” written through it and a note from the champ:

GREAT TIME PLAYING WITH YOU LAST TUESDAY. I JUST COULDN’T CASH THIS CHECK. ALL THE BEST TO YOU AND YOUR FAMILY IN 2013 + HOPE TO SEE YOU IN 2014 @ VALHALLA.

“Oh my God, are you kidding me? That’s just phenomenal. It’s just a classy move,” he says. “I think he’s a great guy.”

If Dufner didn’t win over enough fans with his demeanor and his waggles and his ball-striking and – of course – his PGA Championship victory, this story of a classy move toward a fellow golf professional should help matters.

One thing is for sure: He certainly gained another fan in Labritz.