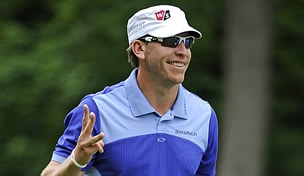 Getty Images
PEBBLE BEACH, CA - JUNE 19: Rafael Cabrera-Bello of Spain hits a shot on the first hole during the third round of the 110th U.S. Open at Pebble Beach Golf Links on June 19, 2010 in Pebble Beach, California. (Photo by Andrew Redington/Getty Images)  -

DUBLIN, Ohio – As each competitor at this week’s Memorial Tournament strolls up the dastardly finishing hole, he is serenaded by a public address announcer reciting a resume of career accomplishments.

Or maybe they are career goals.

That’s because when Ricky Barnes made that jaunt to the final green just before noon on Friday, his name prominently affixed to the nearby leaderboard, the awaiting gallery was told, “… he has one PGA Tour win …”

Actually, he has one fewer than one.

In the announcing business, we call this an unforced error. In the prognostication business, though, it may simply be construed as foreshadowing.

“Maybe they're foreseeing something this week,” Barnes later said with a laugh. “I'm hoping.”

While the golf world awaits the initial professional victory for Rickie, it may indeed be Ricky who breaks through first. Following last year’s T-3 result here at Muirfield Village, the latter has opened with scores of 68-70 to enter the weekend very much in contention yet again.

“Yeah, I'd love to get it,” Barnes said of the elusive first title. “I was pretty good early on in the year, keeping myself calm once I got into that position at Honda and Hilton Head. I was making some good swings, unlucky bounce on a few holes there. But I'm feeling more mature on the golf course and a little more at ease once I get into that position.”

Maturity is a running subplot in the Barnes storyline. No longer is he the teen heartthrob who first hit the scene with a T-21 finish at the 2003 Masters. Now 30, he got married in October and the couple is expecting their first child in August.

He is now nine years removed from winning the U.S. Amateur, eight years past earning that low amateur status at The Masters and three years from developmental tour purgatory, the last of which kept him in its grasp for a half-decade before he finished 25th on the 2008 money list to earn the final PGA Tour card that season.

Since then, Barnes has built a reputation as a steadily improving player, ascending from 120th on the money list as a rookie to 43rd last season. He often sees his greatest successes on difficult golf courses, finishing in a share of second place at the 2009 U.S. Open, T-10 at last year’s Masters and already with a pair of fourth-place results at tough venues this season.

And, of course, Jack’s place certainly qualifies, too.

“I've always liked a course [where] par is your friend,” he explained. “You're making pars even on what some people call easy holes. You're not losing shots much to the field. Even out here, you chip away a lot of pars and grind the round out and steal a few birdies. And that's kind of what I did to get myself back into the round.”

Barnes didn’t let early bogeys on two of the first three holes characterize his round, nor was it defined by his eagle and four birdies, either. Instead, it was a pair of gutsy par-saving efforts on the final two holes – a 17-footer on No. 17 and an 8-footer on 18 – which kept him battling for the top position.

Those are the types of Friday putts that lead to Sunday victories.

Ask those close to him and they’ll maintain that Barnes’ maiden voyage to the winner’s circle is on the impending horizon.

“I really think he’s a player who is definitely capable of a couple of wins a year, definitely a top-50 player in the world, no doubt,” said caddie Ray Farnell, who has been on the bag for close to two years. “All parts of his game are really good. It’s just a matter of biding your time. Everyone waits for that win, but you can’t just go get it. You sort of have to work hard and grind away at it. He’s still young, he’s still maturing and he’s got it all ahead of him.”

His career arc parallels that of Matt Kuchar, a can’t miss-kid who – for so many years – missed. The winner of the U.S. Amateur two years prior to Barnes, Kuchar struggled to fulfill his potential until having it all come together two years ago.

If the analogy continues, that may mean Barnes will soon reach his destiny, too.

“I'd like to get to that point in my career,” Barnes said. “Am I there yet? No, but like I said, I keep putting myself into positions.”

He’s in position to win once again this week. If he can claim the title, well, that announcer on the 18th hole will be proven as a soothsayer.

“Yeah, I think it will be nicer when he says I have a Tour victory,” Barnes joked, “and that it's true.”

Why Tiger skipped the first 5 events of restart

This week’s Memorial Tournament is Tiger Woods’ first official PGA Tour start since he finished last at the Genesis Invitational in February.

First week without fans will look, feel and sound like no other in Tiger's career

Fans flock to Tiger Woods. Tiger Woods thrives on their energy. But things will be very different this week at Muirfield Village.