Being the 54-hole leader not always an envious position 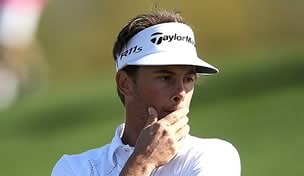 PEBBLE BEACH, Calif. – It isn’t fun baffling a legend, especially one known as The King. A man of such royalty – even if it is just a nickname – deserves the dignity that comes with his role. He deserves to maintain that regal appearance without having to scramble for answers.

And yet, there was Arnold Palmer, a look of complete bemusement stretched across his face. This was three years ago, just days after Tiger Woods had shocked the world. This time, though, it wasn’t because of another dominant victory or clutch putt that led to an awe-inspiring celebration.

Instead, the greatest closer in the game’s history shocked us by losing. For the first time in 15 tries, Woods let a 54-hole major championship lead slip through his hands, as he watched Y.E. Yang climb past him for the PGA Championship title. He was roundly criticized for taking a conservative approach after jumping out to an early lead, a valid criticism considering his apparent strategy.

Palmer is known as golf’s consummate riverboat gambler, a player who would hitch up his britches and take a mighty lash at the ball every single time. So when he was queried about Woods’ cautious game plan, The King could hardly contain his puzzlement.

The seven-time major champion wrinkled his nose and furrowed his brow, then finally explained, “I don't like that. I think he's too good to be conservative. If you have the ability like he does, why be conservative? And obviously it didn't work out.'

That condemnation could serve as a mental slogan for many of this season’s conservatives. In three of five tournaments so far, the 54-hole leader has failed to emerge as the champion. Two weeks ago, Kyle Stanley led the Farmers Insurance Open by five strokes entering the final round and lost; last week, Spencer Levin led the Waste Management Phoenix Open by six and lost, as well. In each instance, the players talked about not only how difficult it was to play with a lead, but a healthy lead at that.

“I think playing from behind was quite a bit easier,” said Stanley, who was the beneficiary of Levin’s misstep in Phoenix. “I think when you have a big lead, it's human nature to want to protect it. I think it's a little easier kind of being on the chasing side.”

“I didn't really know how hard it was until I was actually in that situation,” Levin explained. “You've got to have a little different mindset. It feels weird because at least for me I just wanted to get the holes over with, just run out real quick. It was a really strange feeling.”

We hear it all the time in those other sports. The intonation is that scoring is important, but preventing the opponent from scoring is of the highest priority when it comes to winning.

If we’ve learned anything recently, it’s that defense doesn’t win golf tournaments. Stanley and Levin are just the latest examples of players who led, then failed to claim the hardware, but the list is lengthy and varied. In fact, last year, just under half of all 54-hole leaders failed to win one day later.

All of which leads to the $1 million – and in some cases, a few stacks of bills more – question: Why?

“One, it's hard to win,” said Woods, who owns a 48-4 career PGA Tour record when holding the 54-hole lead. “Being a frontrunner, everyone's kind of chasing you. You're in a position where if you do make a few mistakes, it's alright because obviously you have shots to play with. … But it also depends on how many guys are chasing you, too. If you've got a whole wolf pack behind you or one or two guys, it's a totally different deal.

“I think for me, personally, I've always been excited about being in that position. I know I've played well to get there, so just trying to do the same things I did to get there and hopefully it will be enough.”

At last year’s AT&T Pebble Beach National Pro-Am, Steve Marino held the 54-hole outright lead in hopes of earning his first title, but was one of only four players in the eventual top 20 to post an over-par score, getting lapped by D.A. Points in the end.

“I can just kind of put my nose down and not look up and not care about what anybody else is doing,” Points said about playing from behind. “When you've got the lead, you kind of have to be cognizant of what's going on around you. I think that's maybe the harder part.”

Call it golf’s ultimate Catch-22. Every player understands that it’s less comfortable to be playing with a lead – and yet no player would wish to be anywhere but atop the leaderboard entering the final round.

That list even includes Stanley and Levin, fresh off their Sunday miscues. When asked whether he may hit a few stray shots on a Saturday afternoon in order to pass on the lead, Stanley laughed and said, “I don't know about that.”

Levin, meanwhile, relishes another shot at finishing off a big lead. “Don't get me wrong,” he intoned. “I'd like a six-shot lead again. I think that would be great. But I think it's easier [playing from behind] from the aspect that you aren't expected to win. You know what I'm trying to say?”

Palmer doesn’t. The legendary swashbuckler was once asked about players getting weak in the knees and aiming for the fat part of the greens. He cocked his head to the side, produced a crooked little smile and spoke a truism that doesn’t often exist in today’s game: 'I don't know what conservative is.'