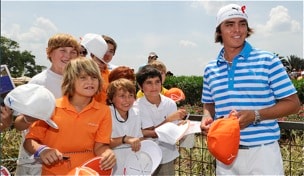 It was Saturday of last month’s Memorial Tournament and Rickie Fowler had just finished his round. Amongst a sea of single-digit handicap junior players and wide-eyed teenyboppers all clad in the golfer's favorite creamsicle orange was a middle-aged man. Like his younger peers, he was dressed as if ready for a Fowler-only costume party, his rather large gut protruding from beneath his Puma golf shirt, his head topped by the increasingly iconic flat-bill cap.

So yeah, I took a pic. Couldn't help myself. Sue me, PGA Tour.

The objective of this story isn't to get me in trouble. It's to illustrate a point.

Or so it would seem.

Fowler has quickly become a fan favorite, pushing Phil Mickelson for the unofficial weekly autograph request title, but it’s his lack of another title that has presented detractors in the social media world.

“For the most part, people at tournaments and out watching me play, they’re watching for a reason. I’ve never really had a specific time at a tournament where I’ve had any negative comments from a fan,” Fowler explains. “The people that are saying things or bashing me aren’t the same ones who are at tournaments.”

I can vouch for him. Following last week’s AT&T National, where Fowler parlayed a share of the 54-hole lead into a tie for 13th place, my own Twitter feed was flooded with posts from those taking issue with his game … or his ability to close … or his image … or, well, anything…

Will the golf media ever realize Fowler isn't as good as they want him to be?

Is Rickie Fowler the Natalie Gulbis of mens golf? Colorful outfits, sexy but no wins??

Rickie Fowler: Good golfer for a dirt bike rider or the real deal?

What is it with Fowler? Does he not have mental game to handle lead on Sunday?

I know he's only in his second year, but why does everyone think Rickie Fowler is the next great thing?

Sheesh, being a 22-year-old superstar-golfer-in-the-making isn’t all it’s cracked up to be these days. Especially if you’re a 22-year-old superstar-golfer-in-the-making and you haven’t won anything yet. With his eight-shot U.S. Open victory, Rory McIlroy raised the bar for early success, leaving fellow youngster Fowler left to answer questions about so-called underachievements.

After all, in a season-and-a-half as a PGA Tour member, all Fowler has accomplished is three top-three finishes and nine top-10s in 44 starts, while making the cut in three of four majors and playing nervy golf on foreign soil at the Ryder Cup. Rather than praise his performance, though, many have taken to calling him out for the one thing he’s failed to do thus far: Win.

If he worked on Capitol Hill, the critics would be considered dissenters. If he was a preacher, they’d be nonbelievers.

Instead, Fowler has just one word to describe those who think he’s overrated and oversold.

“They’re always going to be around,” he says. “You see it on Twitter quite a bit. It’s funny because it just depends on how you deal with them or don’t deal with them. It can bother a guy, but we talk about it. I’ve mentioned it with [Ian] Poulter and Bubba [Watson], what kind of tweets we get from the haters. It’s something we laugh about. We don’t want to let it get to us.”

We have entered a new age of fandom. Fifty years ago, if you wanted to state your case about the game’s next potential great paling in comparison to his predecessors, you’d have to personally confront Jack Nicklaus and call him “Fat Jack” to his face – a daunting proposition if there ever was one.

With the advent of social media, though, anyone with a smartphone or computer can make their opinions known – often in complete anonymity – a fact that hasn’t gone unnoticed by Fowler.

“People are going to come up with the most random things,” Fowler says. “If someone says something bad, there’s always that nice little ‘block’ button.”

For as much as the in-person worship seems a bit uneven for a player who has yet to win a tournament, the online animosity toward him for the very same reason feels disproportionate, as well. Of course, the latter is a direct correlation of the former. The more Fowler is adulated by the press and idolized by the public, the more those “haters” resent the notion that his performance has yet to live up to his potential.

Such vehemence certainly has little to do with Fowler’s personality. He may dress flashy, but he leads the Tour in “yes, sir” and “no, ma’am” responses. Like his friend McIlroy, he is a self-made kid from a modest background. And also like Rory, he deals with adversity in the most endearing way possible.

When McIlroy turned a Masters lead going into the back nine on Sunday into a 15th-place finish, he saved face and earned support with his post-round perspective: “This is my first experience at it, and hopefully the next time I'm in this position I'll be able to handle it a little better.”

Granted, it was a smaller event and therefore less disappointing, but Fowler’s words after losing the AT&T were eerily familiar: “Just a tough day, but I learned a lot. It was great to be in that position. You know, it's good to see what other guys do in the same situation and how they handle themselves.”

The similarities between their reactions weren’t just a coincidence, either.

“To see what he went through, obviously it was multiplied by a good amount and tougher to deal with than mine, because he had a decisive lead at the Masters and I was tied for the lead at a normal Tour event,” Fowler says, “but seeing how he handled it and went on to play at the U.S. Open, I felt I was in a similar position and had to take the positives from the week.”

“I think it’s very important to deal with it that way,” says Fowler’s caddie Joe Skovron. “It’s a process and you keep learning from it. That’s what makes guys like Rickie and Rory so good. They take it and deal with it and then move on. They don’t think about what they missed out on. Just go try to play better and win the next one.”

The next one comes this week at Royal St. George’s, site of the Open Championship. In his first start at the world’s most venerable tournament, Fowler finished in a share of 14th place last year. He would love to follow in McIlroy’s footsteps, erasing a setback by clinching that elusive victory.

If he doesn’t, Fowler will still have hordes of fans following his every move, craning for a glimpse of him and begging for autographs while the haters continue to post their doubts in the virtual world. And if he does? Those throngs of orange-clad supporters will grow even bigger and the haters may finally be silenced – for a little while, at least.