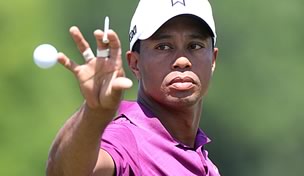 Getty Images
CASTELLON DE LA PLANA, SPAIN - OCTOBER 24: Matteo Manassero of Italy celebrates with his caddie on the 18th hole during the final round of the Castello Masters Costa Azahar at the Club de Campo del Mediterraneo on October 24, 2010 in Castellon de la Plana, Spain. (Photo by Stuart Franklin/Getty Images)  -

If you’re surprised by Tuesday’s announcement that Tiger Woods will miss next week’s Open Championship due to lingering injuries, you’re likely surprised by other recent occurrences, too.

Sunrise every morning. Traffic at rush hour. Water in the ocean.

All of ‘em are about as shocking as Woods making his most recent declaration.

It was only a week ago when the 14-time major champion maintained during a press conference that there is “no timetable” for his return. Woods often keeps the public in the dark when discussing his injuries, his schedule and, well, just about everything else, but he just may have been telling the truth here.

I can safely report that I absolutely, positively have no idea.

But I don’t feel bad about it, because I’m not alone. You, dear reader, don’t know when he’s coming back, either. Nor do my colleagues in the golf media. Or Woods’ fellow players. Or his doctors.

That’s right. Woods isn’t saying when he’ll return for one simple reason. Like the rest of us, he, too, has no idea.

That will be considered bad news to those who wish to see the world’s 17th ranked player return sooner rather than later, but really, it should be viewed in a more positive light. Instead of rushing back to action as he’s done in the past – including nine holes before withdrawing at The Players Championship two months ago, a move which he claims set back the recovery process – Woods now maintains that he will wait until he’s fully prepared to compete once again.

“I am only going to come back when I'm 100 percent ready,” he said through a statement on his personal website. “I do not want to risk further injury. That's different for me, but I'm being smarter this time. I'm very disappointed and want to express my regrets to the British Open fans.'

Truth be told, no professional athlete is ever really “100 percent” – and yes, that includes golfers. Walk the practice range at any PGA Tour event and you’ll find players with every sort of ailment imaginable, often playing through pain.

If Woods is indeed waiting until he is 100 percent healthy, it may be a long wait. Earlier this year, when asked the last time he wasn’t hampered by an injury, he intimated, “It was about six years ago, to be honest, so it's been a while. I've been hurt quite a bit over that period of time.”

And so we’re left with only speculation as to when we will see Woods on the golf course once again.

The next tournament on his usual schedule is the WGC-Bridgestone Invitational four weeks from now. Though he finished in a share of 78th place in an 80-player field last year at Firestone, it’s a course on which he’s very comfortable, having won the event seven times since 1999.

It would be a logical place to return, considering that success rate and the event’s placement on the schedule, directly preceding the PGA Championship.

If he’s still not “100 percent ready” to play in Akron, but can give it a go one week later at Atlanta Athletic Club, it wouldn’t be a precedent-setting move. Three years ago, Woods took two months off prior to a major, only to win the U.S. Open; last year, he ended his self-imposed leave of absence at the Masters, finishing in a share of fourth place.

Should Woods not come back at either the Bridgestone or PGA, though, all bets are off as to when we may see him swing a golf club.

He likely won’t be eligible for the FedEx Cup playoffs, as he currently sits in 116th place on the points list. He won’t play any Fall Finish events, because, well, he never does. And then there is such overseas tournaments as the HSBC Champions in China.

The smart money might be on the Chevron World Challenge, which not-so-coincidentally counts Woods as host, though he would have to remain inside the world’s top 50 in order to gain a sponsor’s exemption – something that shouldn’t necessarily be considered a given right now.

It may be a long time before Woods is playing competitive golf or it may not be very long at all. What we do know is that his return is still an unknown – not just for us, but for him, as well. If we are to believe what he says, it won’t happen until he is finally “100 percent ready.”