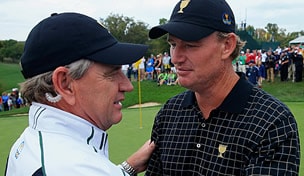 Getty Images
Trying his best to get his ball out of the bunker, Rick Cochran splashes sand in the air during Big Break Greenbrier.  -

DUBLIN, Ohio – Let’s face it: Until the final hour, the most dramatic part of the Presidents Cup occurred on the first day and didn’t even have anything to do with the matches. It was waiting to see whether that baby squirrel was going to gnaw off one of Davis Love III’s fingertips.

That would have been the only nail biter of the week before things started tightening up down the stretch. It never quite got to Defcon 2 levels – hey, it’s the Presidents Cup; does it ever? – but there were at least a few clenched fists before Tiger Woods clinched and everyone else unclenched late Sunday afternoon.

A relatively close final score of 18½ to 15½ should help lessen the idea that this competition needs a complete overhaul, but certainly won’t alleviate it altogether. Depending on individual personality and fandom, your emotions likely ranged somewhere on the spectrum between slightly perturbed and Iowa State football coach.

The list of cries from those outside the gallery ropes about how to “fix” this event is easier said – or maybe screamed – than done, despite PGA Tour commissioner Tim Finchem’s claim that, “By every measure, this was the strongest Presidents Cup we've had.”

That qualifies as a Hyperbole of the Year candidate from a master of such lingo. But it doesn’t erase the fact that many of the complaints in regard to this event don’t come armed with a solution.

Let’s bust five of the myths that afflicted the Presidents Cup this week:

“They should have made the singles matches more entertaining!”

Put yourself in the captains’ softspikes for a minute. You’ve been serving in this role for two years now, charged with the sole responsibility of winning the cup. Nowhere in the mission statement does it claim you’re also responsible for TV ratings, too.

When a Tiger Woods-Adam Scott or Phil Mickelson-Ernie Els match failed to materialize after the captains played their daily game of Battleship, many were quick to criticize them for not producing on-course excitement. Let’s look at it from the other side, though: If the captains had paired players based solely on whom the fans wanted to see, wouldn’t that devalue this as more exhibition than completion? Absolutely.

As Nick Price said when questioned afterward about why he didn’t save Scott for Woods: “I did my pairings this morning to try and win the cup, not to put 1 and 2 together.”

One thing is for certain: It’s impossible to question that motive.

“They should change the points structure to give the Internationals a fighting chance!”

OK, there may be something to this one. Traditionally, the back end of the International lineup is much weaker than that of the U.S. side. Fewer matches per session, logic says, will mean fewer bottom-of-the-roster guys competing.

Should it happen? Well, depends on whom you ask.

“Oh, yes, there's lots of changes I would like to see,” Price said, “but I don't think we should discuss those now.”

“I like this format and I like the Ryder Cup format,” said U.S. assistant Love, who captained last year’s Ryder Cup team. “I think it works out well to leave both of them like they are.”

Will it happen? The PGA Tour will certainly look into the possibility, but despite Price’s pleas, there’s hardly any guarantee that fewer matches will lead to a closer result.

“They shouldn’t play in a city where it rains all the time!”

Yes, Muirfield Village is perennially soggy whenever the Memorial Tournament is played. That’s the rainy season. The townsfolk know it, the players know it and anyone who’s snoozed on the couch waiting for frequent delays to end knows it.

Even Price tried to apologize to host Jack Nicklaus. “I'm sorry it rains here like it does,” he said, shaking his head. “I don't know what to say. I wish one day we would be able to control the weather.”

Mother Nature didn’t cooperate this week, but here’s a neat little fact that has gone mostly overlooked: The average annual rainfall in Dublin during the month of October is 2.61 inches, making it the second-driest month in this town. The amount of rainfall from Thursday-Saturday? Exactly 1.60 inches. That’s about two-and-a-half week’s worth of the average rainfall in a three-day span.

That said, it wouldn’t be terrible to hold this thing in a desert four years from now. You know, just in case.

“They should combine the Ryder Cup and the Presidents Cup!”

So you’re really going to sacrifice one terrific competition to maybe sort of kind of improve another one? Or just dilute the first one?

Forget for a minute the fact that the PGA of America and European Tour own the Ryder Cup, but the PGA Tour owns the Presidents Cup. Even if all parties agreed to somehow split the monumental profits of the two events, any type of winner-stays-on suggestion clearly isn’t fully thought out.

The potential of Europe playing against the International team? Blah. Call me an ugly American, but that matchup would have little appeal, even outside of U.S. borders.

The Ryder Cup is steeped in tradition. The Presidents Cup isn’t there yet. Maybe it never will be, but there’s no reason to play Robin Hood here and steal from the rich to give to the poor.

“They should just scrap this thing altogether!”

That’s not exactly the most progressive thought right there. If they stopped playing competitions just because one team won more often, the Harlem Globetrotters would have been out of business a half-century ago.

But things change pretty quickly in the elite level of professional golf. It wasn’t so long ago that the U.S. could barely scrape together a dozen capable players for one of these competitions. (Or have you forgotten the days of Vaughn Taylor and Brett Wetterich?) By the same token, international players are going to keep improving.

Countries like China, Japan and even India could quickly become golf hotbeds – and they certainly have bigger populations from which to choose. According to the latest census numbers, there are 6,061,900,000 people living outside of the U.S. and Europe, but “only” 313,900,000 stateside.

Hmm … based on that, it sounds like the guys in red, white and blue pulled off another upset on Sunday.