PONTE VEDRA BEACH, Fla. – This is not a love story.

Five years ago, a group of good ol’ boys from Nashville, Tenn., journeyed to The Players Championship. There was Bobby Page, his two college-aged sons and a few of their pals. All nice guys, the kind with infectious smiles and contagious laughs that can make friends with a stranger in no time at all.

It was your typical buddies’ golf trip. They watched golf, played golf and talked about golf. It was so much fun, they turned it into an annual tradition, making the pilgrimage to TPC Sawgrass for every edition of the event since.

Prior to last year, though, they were fans without a mission. They cheered for the great shots and sighed for the disappointing ones, but their attention had no direction.

Until they found K.J. Choi.

“We were sitting between 16 and 17 and some golfers were coming through,” Alex Kirkland recalled. “They were upset and cussing. Then K.J. comes through; he’s just grinning ear to ear. Ever since then, I was like, he’s just a friendly fellow.”

Choi was noticed by his fans for his good manners on the course. (Getty Images)
The longtime PGA Tour veteran didn’t have the resume of Tiger Woods or the electric smile of Phil Mickelson or the star-power potential of Rickie Fowler. He did, however, have one thing going for him that appealed to the golf fanatics.

As Bobby Page put it, “We just kept noticing how nice a guy he is.”

And so was born “Choi’s Bois,” an unlikely fan club based solely on the fact that a group of guys from Nashville wanted to root for a player from South Korea simply because they liked him.

No, this is not a love story. It's a like story.

When they returned this year, the group came outfitted in black t-shirts with its lyrical name printed on front. They wore ‘em every day, following their new favorite player all over the course, ignoring all social mores about cheering loudly for a non-superstar and keeping hygiene issues to a minimum.

“We’re probably a little rank,” Page admitted after four days in his shirt. “We’ve been wearing these since Thursday.”

They may never take them off.

That’s because in the first year as an official faction, “Choi’s Bois” witnessed their new hero claim the most important victory of his lengthy career, outlasting David Toms in a playoff to earn the crystal trophy at one of the game’s most prestigious events.

“It’s been a bunch of emotional highs and lows,” David Clayton explained. “He left a few shots out there and we got down a little bit, but we always had hope that he would come through and he did on 17. He hit some incredible shots. We’re all pumped up and excited.”

They’re not the only ones.

You may think big-time golfers are accustomed to signing autographs and having fans yell their names from behind the ropes – and that’s true, to an extent.

When a player gets honored with his own on-course entourage, though, it means a little more than the average applause.

“They showed me a lot of support, a lot of love,” he said through an interpreter Sunday evening. “For them to come all the way from Tennessee to watch me play? Imagine, I have no relationship with them. This is the first time I’ve ever seen them. For them to fly all the way over just because they like me as a player and to support me they way that they did, I’m very appreciative. It’s really spectacular to see something like that.”

Choi enjoyed their continuous company throughout his rounds so much that he asked them if they could all take a photo together – not the other way around – breaking a long-standing unspoken rule that it’s the fans who are supposed to initiate that type of memento instead of the players.

But remember, Choi is a nice guy – the very reason “Choi’s Bois” started rooting for him in the first place.

“He really appreciated it,” Page said. “We’ve had a ball and he’s been very nice to us. We built a lot of memories while we’ve been down here. That’s what it’s all about.”

“He just loves the game and plays it the right way,” Curtis Gribble added. “He’s just a joy to watch. When he bogeys a hole, if anybody claps, he acknowledges them – more than any other golfer out here. You can tell he just loves what he’s doing and enjoys the fans. He just knows it’s special to be out here.”

It was at that point when Page interjected, reminding Gribble of an earlier acknowledgement from their favorite golfer.

“Hey, he said he loves you,” Page recalled with a laugh.

Maybe this is a love story after all. At least, as Gribble concluded, “In a roundabout kind of way.” 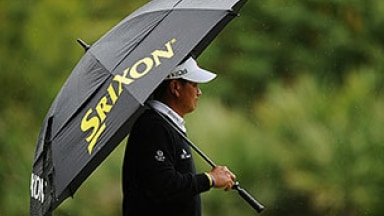 Choi leads rain-delayed Heritage by one

The second round of the RBC Heritage was cut short because of rain Friday, with K.J. Choi shooting a 4-under 67 for a one-stroke lead over Robert Allenby. 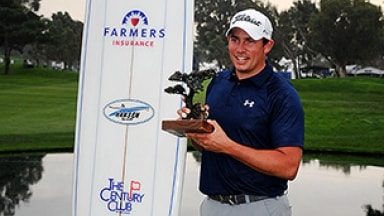 Scott Stallings outlasted the Farmers field to become the sixth player under the age of 30 with three or more PGA Tour wins. 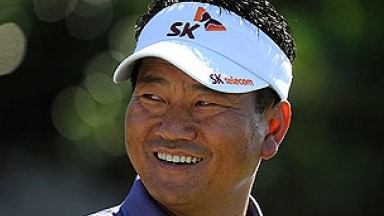 Choi buys irons off the rack, shoots 72 at Memorial

Because Jack Nicklaus doesn't allow equipment manufacturer vans on site at the Memorial Tournament, K.J. Choi popped up at a local Golf Galaxy retail store this week and purchased a set of irons.