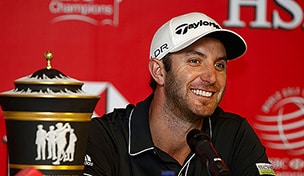 When you're a professional golfer, life gets a lot easier when you win your first tournament of the year. Even those who were never in danger of losing status or slipping in the world ranking can take a certain liberating pleasure in knowing that whatever else happens for the rest of the year, you've got a notch in the all-important win column to your credit.

Just ask Tiger Woods, who seven times has started his campaign with a victory. Or Stuart Appleby, who used to make a habit of winning the season-opener at Kapalua.

For Johnson, though, his triumph at the HSBC Champions event means more than just being able to take it easy for the remainder of the 2013-14 season.

It means a return to glory on the heels of a disappointing campaign.

Following his win at the season-opening Hyundai Tournament of Champions, Johnson failed to find the winner’s circle again. It’s not that he didn’t play well – he was runner-up at the RBC Canadian Open and had four other top-10 finishes – it’s just that he suffered from another innate problem of winning in his first start.

There’s nowhere to go but down.

'It's the biggest win I've had in my career so far,' he said. 'Those guys put a lot of pressure on me. I'm really proud of the way I handled myself.'

All of which leads to more takeaways from the tournament.

It means he’s overcome a stigma of “soft” victories.

Anyone wishing to denounce Johnson’s accomplishments in recent years has quickly pointed to the fact that three have come at events shortened to 54 holes. Through that checkpoint in Sheshan, he held a three-stroke advantage, only to watch it vanish in the first six holes.

If a player who wins every year still needed to prove himself as a closer, that’s exactly what he did. Johnson played his final six holes in 5 under, prevailing over Ian Poulter by that same three-shot differential with which he started the day.

“I knew I just needed to keep playing my game,' he later said.

In case there was any doubt, his game includes the odd mistake here and there mixed with a dazzling array of red numbers. For the week, Johnson posted a pair of eagles and 28 birdies, numbers which easily offset two bogeys and a wince-inducing three doubles.

It means he remains with Phil Mickelson as the game’s models of consistency.

Mickelson? Johnson? Consistent? That may sound like the furthest characteristic of either’s game, but no players have won at least once every season for as long as these two.

Johnson, in particular, has shown a winning consistency since joining the PGA Tour, claiming a title in each of his first seven seasons. There are very few golfers on the planet whose best golf is better than that of their competitors. He is one of these few.

What we’ve learned about Johnson is that when he’s off his game, the results look rather ordinary. But when he’s got his best stuff, he’s awfully tough to beat.

It means he’s still the winningest 20-something in the game.

We can debate whether Rory McIlroy or Jordan Spieth are better players or will have more celebrated careers. But we can’t argue the stats, which show that Johnson has won more than anyone else before the age of 30.

That will change just after next year’s U.S. Open, when he’ll hit the Big Three-Oh. That should only bring greater anticipation, though, as history shows that players don’t reach their primes until this point – especially at the majors.

All of which leads to the last thing we learned from Johnson’s win this week.

It means that the next step in his progression is a major victory.

Johnson’s resume now includes regular season wins, a FedEx Cup playoff win and, thanks to Sunday’s charge during the final stretch, a WGC win. He infamously finished T-5 at the 2010 PGA Championship after grounding his club in a bunker on the final hole, but it hasn’t all been bad news at the majors.

He owns a half-dozen top-10 results, including at least one in each of the last five years. And he understands that his best golf can finally bring that elusive win.

Yes, winning in your first start of the season can be liberating, allowing a player to feel like he’s playing with house money for the remainder of the year. Or it can lead to bigger and better things later on.

Last season, Johnson failed to add to his season-opening win. He’s hoping this one creates a much different aftershock.