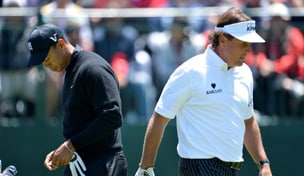 Somebody needs to send that scoop over to the Pulitzer committee, pronto.

The purpose of this exercise isn’t to debate which player goes about his business in a “better” manner. There’s more than one way to skin a cat – or capture a skin.

Photos: Tiger Woods through the years

Photos: Phil Mickelson through the years

Of Woods’ 14 career major championship victories, every single one of ‘em has come when he held or shared the lead entering the final round. (Again, more exhaustive investigative research to find that one.)

Tiger has thrived – or did thrive, at least, back when he was winning majors – on picking a target number prior to teeing it up in the final round, then hitting that target, letting his fellow contenders flail by the wayside like fish trying to climb a tree. Or simply providing a timely stiff arm to any close pursuant not named Y.E. Yang.

He’s been called the Mariano Rivera of professional golfers, but even that is a minimal insult; Woods’ 14-of-15 mark is four percentage points higher than the Yankees closer’s career save-conversion rate.

Of course, what that number also means is that adversely Woods has compiled an 0-for-54 major championship record when failing to lead after 54 holes. That’s more than just a trend. It’s a way of life.

All of which leads to the inevitable question: If other players can produce victorious Sunday afternoon rallies, why can’t the guy with more talent than anyone else?

Perhaps it’s just a matter of time before Woods embraces that come-from-behind role, but for now his antipathy toward having to look over his shoulder – both literally and figuratively – reeks of a player who is one-dimensional when it comes to such moments.

On Sunday, when he started the Open Championship final round two strokes off the lead, then saw that differential gradually grow to three and four and five, Woods continually failed to play aggressively. “I had a hard time adjusting to the [green] speeds,” he explained after a round of 74. “I don’t think I got too many putts to the hole today.”

Even the most casual of recreational golfers has heard the term, “Never up, never in.” (Or saddled themselves with the self-effacing, “Hit the ball, Alice.”) Hockey great Wayne Gretzky once said, “You miss 100 percent of the shots you don’t take,” a notion which can easily be applied to aggressive putting, especially when trailing late in a major championship.

While Tiger remains the greatest closer of all-time, it’s become abundantly clear that he’s attempting to employ the same strategy when trailing: Play steady golf and let the other contenders make the mistakes.

It’s also become abundantly clear that such a blueprint is inherently flawed.

That brings us back to Mickelson, whose yin zealously repels Woods’ yang. (No, not Y.E. again.)

The mercurial lefthander plays golf like a death row inmate eats lunch. He’s been called a riverboat gambler on the course, but that analogy is a slap in the face to all riverboat gamblers who don’t push the chips all-in every hand.

Despite winning three of his five major titles after holding the 54-hole lead, Mickelson never has been – nor ever will be – a closer of Woods’ caliber. Exhibit A for this belief occurred just last month, when he held the overnight advantage at the U.S. Open, then three times on Sunday claimed it back at Merion, only to lose it each time.

It doesn’t take the staunchest Mickelphile to recall in cringing detail the man’s daunting decision to hit driver with a one-stroke lead on the final hole at Winged Foot back in 2006, even after a day filled with wayward drives. And what happened? The ball found a hospitality tent and its owner posted double bogey to lose by a stroke.

Phil doesn’t have the stiff-arm capability of Tiger. He wasn’t born with the governor that keeps him from trying things, even when the best play is the safe play.

That not only explains his recent U.S. Open “heartbreaker,” as he called it, but his Open Championship victory, too.

Faced with a five-shot deficit entering the final round, the situation fit Mickelson’s personality perfectly. He could play aggressively knowing there was nothing to lose. If aggressive golf resulted in a 78, so be it, he’d just fall further down the leaderboard; if it resulted in 66, though, he’d likely add a claret jug to his collection. And that’s exactly what happened.

Those are words you sometimes wish Woods would utter when he’s playing from off the lead, just as Woods’ well-known declarations about retaining first place would seep through like osmosis for Mickelson.

But they don’t. Because it’s not part of their respective personalities.

Phil and Tiger are the two most heralded golfers of this generation, but they’re unique individuals, as different in personality as two men can be while successfully competing at the same craft. That’s not just a footnote or discussion topic for the tabloids, either. It wholly explains why each has been so proficient at finding success in completely opposite scenarios.