Getty Images
Benjamin Herbert of France wears a cap with reading 'pray for Paris', to commemorate the victims of the Paris attacks during the BMW Shanghai Masters golf tournament at the Lake Malaren Golf Club in Shanghai on November 15, 2015. / AFP / JOHANNES EISELE (Photo credit should read JOHANNES EISELE/AFP/Getty Images)  -

I don’t know Steve Elkington personally. His long run of relevance as an elite professional golfer was dying down by the time I started covering the beat in 2004, so other than maybe a couple of long-forgotten news conference questions and recalling that he owned a beautiful swing and an ugly wardrobe, I really don’t know the man.

But therein lies the beauty – and, sometimes, ugliness – of social media.

Through outlets like Twitter, we are able to get to know people whom we otherwise wouldn’t. Unfiltered, unvarnished thoughts straight from the source. When it comes to golfers, many have employed social media as a tool to bring thousands of fans inside the ropes with them. I’ve learned that Ian Poulter has a sports-car fetish, Zach Johnson loves barbeque and Luke Donald has a much better sense of humor than what comes across in interviews.

I’ve also learned that Elkington is hateful, classless and in desperate need of attention.

The last one is just my opinion. The first two, if we are to believe the level of rancor often emanating from his Twitter feed, can be submitted as facts.

The latest example came just after noon eastern time on Tuesday, as Elkington felt the need to go public with his thoughts on Michael Sam, the former Missouri linebacker who recently told the world he’s gay, just two months prior to the NFL Draft (Editor's note: This is a screen capture; tweet was deleted):

Efforts to reach Elkington for comment through his agent were not immediately returned. A PGA Tour media offical emailed this response to GolfChannel.com:

"Under our regulations, conduct unbecoming a professional includes public commentary that is clearly inappropriate or offensive. With respect to this matter, and consistent with our longstanding policy, we do not comment on player disciplinary matters."

Elkington replied to one tweeter by insisting that his stance was not homophobic, but rather a perspective on the television coverage. By the time you’re reading this, there’s a good chance that he’ll attempt to make further amends, too.

That’s been his modus operandi in the past. Tweet first, ask for forgiveness later.

Like last July, when he tweeted that a couple of caddies at the Senior British Open “got rolled by some Pakis,” a reference to the large Pakistani population in Southport, England. After deleting the tweet and receiving a police escort to the course the next day, he hinged his apology on the fact that he was Australian and didn’t realize the racist connotations – forgetting, of course, that he’s lived in the Houston area for much of his professional career.

Or last November, when he tweeted about a helicopter crashing into a Scottish pub with the punchline (and I use that term loosely): “Locals report no beer was spilt.” Once again, he deleted the tweet; once again, he issued an apology.

Or just a few weeks ago, when he responded to a female journalist’s tweeted photograph with a question about breast size. He followed that one by maintaining that he likes the reporter and even issued one of his familiar cartoons about it.

Just one of these incidents would have been one too many for Elkington, but maybe we could have given him the benefit of the doubt, accepted the apology and moved on with our lives. Not anymore. This pattern of hatred – or at least perceived hatred, as if he wants the public to believe he’s more spiteful than he actually is – is embarrassing to himself, distressing to the game of golf and deplorable in a progressive society than often doesn’t have to deal with such juvenile frivolities.

If he is guilty of even just the minimum charge, then it’s being a lunkhead without a license. There’s no crime in living life with ignorance, but don’t expect the rest of us to fail to take notice.

Just in case you believe I’m being particularly prudish in this stance, understand that I’m hardly alone.

During last year’s WGC-Bridgestone Invitational, just after Elkington’s tweet about Pakistani robbers, one top-20 major champion golfer told me: “I used to love the guy. He was one of my favorites. That swing was so good. But after following him on Twitter for a little while, I’ve realized the kind of person he really is.”

There’s a good chance that if Elkington had never clicked the button to sign up for a Twitter account years ago, he’d be remembered for that buttery golf swing that earned him the 1995 PGA Championship title and nine other PGA Tour victories in a career that spanned parts of four decades.

That’s the beauty – and ugliness – of social media.

There’s another beauty to this whole story, though. Unlike in a news conference setting at a tournament, we can all just choose to ignore him.

Then it’s back to business as usual, until the next time he posts a controversial tweet. And yes, history shows there will be a next time. For this, we can finally give him the benefit of the doubt. 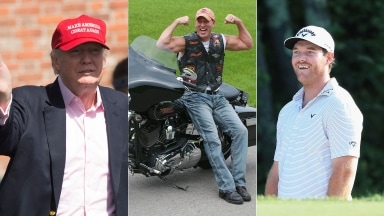 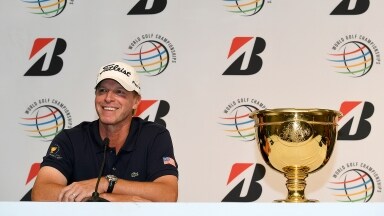 With just over a month remaining to qualifying for the Presidents Cup, this is shaping up as a new American team. 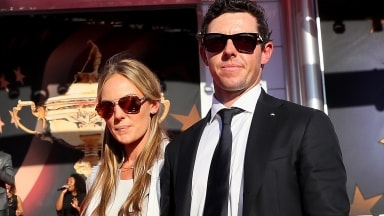 After a recent spat with Steve Elkington, Rory McIlroy says he's off social media "for a while" and asked his wife to change the password on his Twitter account.