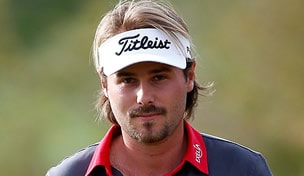 Getty Images
“I think the last three tournaments, I’ve almost played under the impression that it’s going to be as easy as Hawaii. All three I’ve kind of approached it as if I should shoot 6, 7 or 8 under each round like we did in Hawaii, why not? It‘s that easy. But it just isn’t.”  -

DORAL, Fla. – Victor Dubuisson is 23 years old, ranked 23rd in the world and fresh off a 23-hole match-play final during which he drew favorable comparisons to the previously incomparable Seve Ballesteros and elevated his Ryder Cup roster status from possibly to probably.

If there exists a sports writing rule which states that every known fact about a subject shouldn’t be volunteered in the opening paragraph, consider it shredded.

That’s because golf’s latest emerging star is also a mystery man. He’s been called aloof and enigmatic. He readily admits that he prefers to spend time alone rather than with other people. He wears a perpetual poker face, leaving the rest of us wondering whether he’s bluffing or laying all his cards out on the table.

OK, so maybe that’s not everything we know about Dubuisson.

His last name translates in his native French to “on the bush.” As Jason Day, who withstood a few mind-bending saviors from the desert cacti (click here to see) to defeat his opponent two weeks ago, concludes, “That’s very fitting, right?”

His uncle, Hervé Dubuisson, is considered one of France’s greatest basketball players. “He was like the Kobe Bryant of France,” boasts countryman Thomas Levet.

His earliest memory of golf was the 1997 Masters, when he watched Tiger Woods lap the field by a dozen strokes and decided on the spot, days shy of his seventh birthday, that he would become a professional golfer someday.

Unlike most would-be pros, however, Dubuisson didn’t wait to grow into the role, instead taking what can only be termed a non-traditional route. In a note that won’t be listed on any Department of Education pamphlets in France anytime soon, he estimates that he left school at “10 or 12,” instead opting to pursue upper-level courses on the course.

“I was doing some work at home,” he explains, “but I was more going to the golf (course) every day.”

That answer only leads to more questions, but there are some he remains intent on leaving unanswered. His pre-tournament news conference in advance of this week’s WGC-Cadillac Championship was the stuff of confusion, as if he were speaking in riddles.

Q: Did your parents try to talk you out of it?

Q: You said when you were 12 years old, you were kind of already on your own. Can you clarify?

A: No, just no personal family questions. I don't like to think about that, sorry.

Q: Did you play any other sports as a kid?

A: I liked to play basketball, but I prefer to be on my own like to be in control (of) what I do. Basketball, it was great, but I don't really like to depend on other people.

Dubuisson first met Levet, a six-time European Tour champion and his golfing hero, when he was 14. Since then, Levet has served in a mentor role for him; although, he prefers to think of himself as an older brother type.

Though Dubuisson has confided in him about those formative years, Levet will only provide slightly more illumination.

“It was not an easy childhood,” he explains. “When you leave school at 10 or 12 and the parents aren’t much around because they need to work, it’s difficult. So you don’t want to talk about bad things. You just go with that: It was difficult.”

So was Tuesday’s news conference with the assembled media – just like every other one he’s conducted in the past.

Despite the blond locks of a movie star and the goatee of a musketeer, Dubuisson remains shy when it comes to revealing his inner feelings.

“At the start of his career,” Levet recalls, “he didn’t want to answer any questions from the press. ‘Why? I’m 400th in the world. Why do they want to interview me? I’m nobody.’ I told him that’s part of your job.

“It’s not easy for him. That exercise is very difficult for him. You know, he’s feeling the pressure more coming to [the interview room] than the first tee. He’s very sensitive and he’s just a nice guy. Sometimes when the translations are not right, he gets a little annoyed at that.”

Which leads to the last thing we’ve gleaned about Dubuisson: The man can flat-out play golf.

Not that Dubuisson had any idea.

“I didn't have the chance to talk with Paul McGinley, but it's probably because I've changed my phone number,” he surmises. “Maybe he sent me a text or something, but I didn't receive it.”

He didn’t sound disappointed or annoyed or even overly excited. It’s all part of his poker face, one which leaves Dubuisson a mystery man amongst the game’s elite.