Even without a major, Monty is HOF worthy 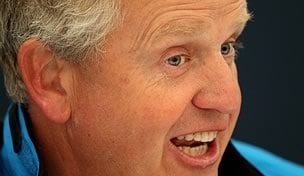 When he’s at his best – when the mood strikes him right or he’s in a pleasant frame of mind – Colin Montgomerie can be equal parts charming, engaging, gracious and even a bit self-effacing when you read between the lines. When he isn’t, though, he can be a brute – a condescending, petulant, sullen blowhard who doesn’t care what you think of him anyway.

So, what is he really like? That’s a question the public often asks of athletes and celebrities which is usually left without a complete response. In the curious case of Monty, the answer is contingent upon which Monty you’ve encountered more often. What is more certain is that if you mention his name to a golf fan, you won’t receive an apathetic response. People either love him or love to hate him – and most fall under the latter category.

He may not have ever been the world’s best golfer, but with the exception of Tiger Woods, Montgomerie has easily been the most polarizing of the past quarter-century. And so it only stands to reason that Tuesday’s announcement that he will be inducted into the World Golf Hall of Fame next year has already been met with copious amounts of support and resistance, like a tug-of-war across the Atlantic.

Monty, Schofield to be inducted into Hall of Fame

For those wishing to break HOF credentials down into inflexible numbers, there are some very specific pros and cons to be weighed in this matter.

Therein lies the crux of the debate: Should a player who never reached the game’s pinnacle be considered worthy of HOF status? Certainly there are those who have won majors and shouldn’t be considered, but in this case the tone sounds more than a bit jingoistic.

It’s no secret that the Ryder Cup inspires and impassions European golfers more than their American counterparts. Woods himself often maintains that he hopes his game peaks four times each year, not five. Ask Monty, though, if he would trade any of his five victories – six if you count his 2010 captaincy – or the undefeated singles record for a major and you’re likely to find a man fiercely possessive of what he’s already earned.

After all, who’s to say what should or shouldn’t mean the most to an elite golfer? Jack Nicklaus counts his two U.S. Amateur victories amongst his major championships; Gary Player claims that winning the Senior Grand Slam is his most impressive accomplishment.

Perhaps Montgomerie’s lack of a major is magnified by the fact that he was so close, so many times. There was the 1992 U.S. Open, when Nicklaus congratulated him on winning, only to be caught from behind by Tom Kite. The same tournament two years later, when he shot 78 in a three-man Monday playoff. And again in 2006, the victim of a late club change with his approach into Winged Foot’s final green, part of a four-car pileup at the end.

In all, Monty’s 10 top-10 finishes in majors included five runner-up results. The truth is, if he hadn’t contended so often, he wouldn’t be as criticized for failing to win. It remains an empty hole in his resume, but shouldn’t overlook the positives throughout his career.

Starting in 1989 with an 11-stroke victory at the Portuguese Open, Monty claimed 31 titles on the European Tour in 19 seasons. He topped the Order of Merit – that circuit’s money list – every year from 1993-99, then again in 2005 at the age of 42. He was named Player of the Year in half of those seasons.

If those aren’t HOF credentials, then maybe we have a skewed version of what they should be. Montgomerie was amongst the best in the game for a very long period of time. Never the best of the best in the individual events considered most important, but way past good or very good. He was great.

But that’s the thing about the Hall of Fame. It’s not strictly about numbers and victories. It’s about how you feel about a certain person. If Colin Montgomerie had always shown the charming, engaging side of himself over the condescending, petulant side, it would probably be easier to disregard his lack of a major championship. As it is, that becomes a rallying cry for those wishing to keep it out. It’s the only reason, though. Every other sign points to a Hall of Fame career receiving the proper recognition.