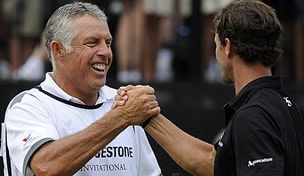 AKRON, Ohio – With the WGC-Bridgestone Invitational victory well in hand, Adam Scott strode down the 18th fairway, enduring smile across his face, frenzied fans screaming from every direction.

No, this wasn’t a case of mistaken identity. The cheers and chants were aimed at the man carrying his bag.

It’s enough of a surprise that any caddie could receive accolades outnumbering his player, but truly staggering when that caddie is revealed to be Steve Williams – the very same Steve Williams known as a camera-throwing, fire-breathing bully while toting the sticks for Tiger Woods over the past dozen years.

Take nothing away from Scott for winning his eighth career PGA Tour title in sublime fashion – a four-stroke differential over Rickie Fowler and Luke Donald, thanks to a bogey-free final-round 5-under 65 – but the winner isn’t always the most compelling story at the conclusion of a tournament. The latest example occurred on Sunday at Firestone, when the champion slammed home a five-foot birdie on the final hole, then stepped aside as his caddie was interviewed on national television.

Williams didn’t disappoint, either. In his first event as Scott’s full-time looper after getting fired by Woods, he fired right back with comments that can only be construed as inflammatory toward his former employer.

“I’ve been caddying for 33 years and this has been the best week of my life,” said Williams, who has also caddied for Greg Norman, Raymond Floyd, Peter Thomson and Ian Baker-Finch. “I’m not joking. I’m never, ever going to forget this week. … It’s the greatest week of my life.”

Forget the previous 144 victories worldwide. Forget the 13 majors while partnering with Woods.

Consider ‘em the comments heard ‘round the world, the jilted employee lashing out at the corporation for harsh treatment, all while bragging about recent success with a new company.

We’re now left to discern whether Williams really intended the sentiment or was simply rubbing it in during the heat of the moment, throwing Tiger under the bus after the player similarly did to him.

“I was absolutely shocked that I got the boot, to be honest with you,” Williams continued. “I've caddied for the guy for [12] years, I've been incredibly loyal to the guy and I got short-shrifted. Very disappointed.”

It has become the ultimate “he said-he said” situation. Woods maintained earlier this week that he canned the caddie in a face-to-face meeting after the final round of last month’s AT&T National. Williams contends that he was told on the phone weeks earlier “that we need to take a break – and in caddie lingo, that means you're fired.”

All of which makes this the biggest caddying dispute since the Dalai Lama – big hitter, the Lama – stiffed Carl Spackler, instead granting him total consciousness on his deathbed. There will be no stiffing of Williams this time, though. As the winning caddie, his traditional 10 percent cut equates to $140,000, making Woods’ take-home total of $58,500 for a 37th-place tie appear paltry by comparison.

While the animosity between the longtime player-caddie combination is boiling over now, don’t expect this story to linger until the time when Scott and Woods are paired together at a future tournament.

Instead, the focus will shift to Woods’ continued efforts to regain his form with childhood friend Bryon Bell on the bag for the interim, while Williams seems to have lit a formidable fire under the previously complacent Aussie player just in time for the year’s final major.

In the aftermath of Williams caddying another player to victory so soon after being fired, it’s easy to forget that this was a dominant performance by Scott – a player whose results haven’t often lived up to his talent level. Read only the headlines and it may appear as if he simply walked next to Williams and hit a few golf balls, while the caddie did most of the work.

For his part, though, Scott didn’t mind hearing the cheers for his caddie while cruising into victory lane on Sunday. In fact, he seemed bemused by the entire situation.

“Obviously, he's a popular guy around here having won now eight times,” Scott said. “They appreciate him a lot, I guess, and he's a bit of a character. It was fun to get support. Whether it's for me or him, I don't care – it's the right team.”

On Sunday evening, that team was headed together for Atlanta, site of this week’s PGA Championship. There was to be a little celebration on the way there. From the player who earned his long-awaited first victory of the season and from the caddie who received vindication in the wake of recent events.

“We’ll just have one or two beverages,” Scott maintained with a suspicious smile. “I think they’re well deserved this time around.”