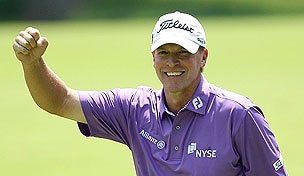 DUBLIN, Ohio – For years, the literal face of American golf has looked wholly familiar. Think the steely-eyed glare of Tiger Woods combined with the Cheshire cat grin of Phil Mickelson. All others needed not apply when two of the world’s most popular athletes were at the height of their supremacy.

Like all faces, though, this one has matured with age. And while those hints of Tiger and Phil still remain, they are now blended with the features of lesser known yet hardly unqualified countrymen.

The cool stoicism of Steve Stricker. The rugged determination of Jonathan Byrd. The omnipresent toothy mien of Matt Kuchar. The unassuming persistence of Mark Wilson.

Those four players make up a large part of the Memorial Tournament leaderboard through three rounds. While other flashier players such as Dustin Johnson, Bubba Watson, Hunter Mahan and Rickie Fowler are often viewed as this nation’s new collective face of the game, these contenders form a quartet of reserved resolve while ascending the list of elite U.S. talents.

There’s Stricker, who leads by three entering the final round at Muirfield Village. Once so far removed from solid play that he lost his playing privileges, he is seeking his sixth victory since the beginning of 2009.

There’s Byrd, who will join the leader in Sunday’s final pairing. Already with a title at Kapalua and runner-up result at Quail Hollow under his belt, he is enjoying more of a career invigoration than resurgence.

There’s Kuchar, who is four shots off the lead in search of yet another lofty finish. Simply put, he has been the world’s most consistent golfer over the past 24 months, less dominant than just undeviating.

There’s Wilson, who is five back and seeking what would be a PGA Tour-leading third victory this season. Despite winning just twice in his first 216 career appearances, he already owns two titles in 14 starts this year, joining Watson as the only players with more than one.

They aren’t so much the Fearsome Foursome as they are the Fearless Foursome.

“I tell people I think Tiger has kind of given us a window,” Byrd said. “He's giving us some time to get some tournament experience and win some tournaments and it's just exciting to see so many guys having a chance to win each week and so many different guys winning.

“There's a lot of talented guys out here right now, guys playing with a lot of confidence. … I think that's kind of spurred me on some, watching those guys. It's just nice to see. I do think American golf right now has a lot of faces, and for a while it was just one face.”

Entering the final round, U.S.-born players constitute the top-four on the Memorial leaderboard, six of the top-seven, 10 of the top-13 and 17 of the top-22. It would be careless to base the revitalization of American golf on a single tournament, of course, especially considering international players hold each of the four major championship titles, The Players Championship and a little thing called the Ryder Cup, as well.

Then there’s the fact that this event favors the native sons for a variety of reasons, not the least of which is that stars such as Lee Westwood, Martin Kaymer, Graeme McDowell and Paul Casey aren’t even in the field.

If we’re learning anything from this week, it’s not that Americans are once again ready to make a collective ascendancy up the world ranking, but that the talent pool is deeper and those advancing from the shallow end aren’t necessarily the players we’ve long expected to make such a journey.

If you’re having a difficult time believing the allure of the superstars has been devalued, don’t worry, you’re not alone in such thinking. The guy leading this tournament still thinks so, too.

“I think it's always going to be Tiger and Phil,” Stricker said. 'They're the drawing power.  They're the guys, the face, I think, of American golf. Not to say that we can't jump in there and grab some of that, too. But those guys, they're big-time. They draw. They draw a lot of people.

“You know, we just kind of live in their little world. I've said that before. Like I say, it's nice to jump up in there and win a tournament here and there and hopefully have another good round tomorrow and do it.”

If he does – or any of his humble brethren, for that matter – don’t expect him to instantly transform the face of American golf. It is, however, slowly transcending to include more players and perhaps not those who were thought to be there.

It’s all part of the new world order, or at least the new American order, in which the quality of a chosen few has been usurped by the overall quantity of many more who are showing their faces.