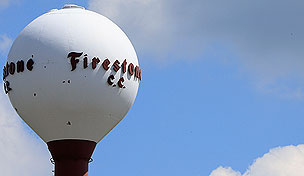 AKRON, Ohio – There are two schools of thought for elite pro golfers when preparing for major championships. Rather than separate them as The Players and The Planners or The Grinders and The Relaxers, it's simple enough to refer to 'em as the Phils and the Tigers.

Lest you've failed to pay attention to the week before a major for the past couple of decades, here's the scoop: The Phils (as in Mickelson) prefer to get into the major groove by competing in a tournament the week prior; the Tigers (as in Woods) would rather ready themselves by practicing, often at the major venue.

Plenty of top players move swiftly between the two groups depending on the major or their personal schedule or their current form. That's true for every big-week-before-a-big-week other than this one, when – in a fit of poetic justice stolen from another athletic superstar – the game's best will be taking their talents to Akron.

Since 2007, the WGC-Bridgestone Invitational has preceded the PGA Championship. That doesn’t always mean host course Firestone Country Club sets up as perfect preparation for the major venue, though. There are many years – take last year, for instance, as Firestone was followed by a seaside links in Kiawah’s Ocean Course – when competing on one doesn’t serve any significance the next week.

This isn’t one of those years.

This year, Firestone will be followed in the batting order by Oak Hill, another tree-lined, old-style course that will require competitors to bash drivers long and straight in order to find success.

“It is very similar, straightforward, right in front of you,” said Woods, who has won at Firestone seven times and parlayed a win here in 2007 into a PGA Championship win, as well. “This golf course, I don't think, is as hard or as difficult as Oak Hill, especially with the green complexes. The green complexes are a little bit more severe at Oak Hill. But overall it's old-school golf. It's just right in front of you, no hidden tricks out there. Just got to go out there and really hit the ball well.”

While the Tigers and the Phils may not always get along, on this matter there is agreement.

“We were there [Monday], and it's in immaculate shape,” Mickelson said. “It's really pristine. It's difficult, as you can imagine, like any major championship. It's as thick a rough as I've seen in a long time – long, dense, thick, heavy rough. And it will have a premium – it's very much like a U.S. Open – it will have a premium on getting the ball in play off the tee and so forth.”

U.S. Open champion Justin Rose generally prefers to relax and practice as opposed to competing prior to a major, but he understands how figuring out Firestone could help him contend for another major next week.

“You're going to have to drive it fairly straight and without too much shape,” he said. “A lot of straightaway par 4s, a lot of holes where you're just literally having to get up and hit a good solid 300-yard tee shot. I feel like this course will be great preparation for that. Like I was just saying, it's a golf course here where you have to just get up and play really well Tee to Green. Sometimes straight par 4s are often the hardest, where there's not a lot of shape to them, and you do have quite a few of those out there on this golf course.”

“They're both old-fashioned, traditional golf courses,” agreed defending PGA champion Rory McIlroy. “I think the fairways at Oak Hill have probably got a little more bend to them. You've got to shape a lot of shots at Oak Hill. Here the fairways are just sort of straight out in front of you. But the greens are similar. They're quite small, slope-y. And the par 3s here and the par 3s at Oak Hill are strong holes, and you're going to have to hit some good iron shots.”

Success at one venue doesn’t always bode well for success at the next, even when the two courses can be viewed as similar tracks. If any of this week’s competitors are seeking a little extra inspiration, though, they need only look back to a few weeks ago, when Mickelson prevailed on a true links course for the first time in his career at the Scottish Open, then triumphed one week later at The Open Championship.

Afterward, he credited the pre-major victory for giving him the momentum to win again and the belief that it could happen on a similar course.

It’s well within reason to think that a week and a half from now, a player will hoist the Wanamaker Trophy aloft, then credit his success at Firestone as the impetus for that victory.