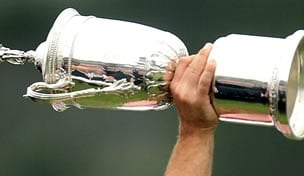 Some predictions are based on research and facts and stats. Others are purely hunches.

Consider this one a little of both.

You can read my statistical reasoning for selecting Edoardo Molinari here, but this pick is based on more than just the average vitals for the four reigning major champions. Really, the man nicknamed Dodo just seems to fit the recent major profile. Very good player, but hardly great. He’s won, but hasn’t claimed a big one.

Based on recent history, he certainly fits in with the McDowell/Oosthuizen/Kaymer/Schwartzel type of players who have been winning the majors lately.

And with that, here is my top-25 for the upcoming U.S. Open, with a caveat: Just in case you didn’t realize it from the guy in the No. 1 position, these aren’t the favorites, but rather my predicted order of finish.

1. Edoardo Molinari
If the similarities with recent winners aren’t enough, he also won a U.S. Amateur on an East Coast, tree-lined course.

2. Alvaro Quiros
The longest hitter on any major tour, when his short game is on, he can be unbelievably tough to beat.

3. Robert Karlsson
Last year’s hot play one week beforehand in Memphis led to a T-27; this year expect much better.

4. Matt Kuchar
Based on recent track record, tough to envision a leaderboard anywhere that doesn’t include Kooch.

5. Justin Rose
Hampered by a few illnesses, but now ready to contend and always gets hot this time of year.

6. Lee Westwood
Close calls in majors – five top-3s in last four years – should be perceived as positive experiences rather than bad signs.

7. Dustin Johnson
When one interviewer recently told DJ that lengthy Congressional suits his game, his eyes lit up.

8. Phil Mickelson
This championship is Lefty’s white whale, but he’ll soar in the polls with a win in the nation’s capital.

12. Hunter Mahan
Even this ball-striker supreme can’t hit all the greens – and he’s been known to be dicey from greenside rough.

13. Rory McIlroy
Great story if he can recover from back-nine meltdown at Augusta to contend once again.

14. Steve Stricker
World No. 4 owns just three career top-5s in majors – but two of ‘em were at the Open.

15. Nick Watney
Rarely mentioned among PGA Tour’s longest hitters, but his distance off the tee matches almost anyone.

16. Patrick Cantlay (a)
Hot on the heels of winning the Jack Nicklaus Award as a UCLA freshman, he cruised through the PGA Tour player-laden Columbus sectional.

17. Fredrik Jacobson
Known as “Junkman,” this noted scrambler should benefit if the leading score remains close to par.

18. Martin Kaymer
Hasn’t played his best golf recently, but the reigning PGA champion has the talent to win anywhere, anytime.

19. Francesco Molinari
If the other Molinari brother wins the title, I’m taking partial credit with my pick to win.

20. Ian Poulter
Quickly becoming known as a match play magician, he could thrive in a final-round final pairing.

21. Jonathan Byrd
Longtime pro is enjoying a breakthrough season with one win and a few other title contentions.

22. Robert Rock
One of the few players on a major tour without a hat deal, he looks like a throwback without one.

23. K.J. Choi
Once won the AT&T at Congo, but no player has ever won The Players and U.S. Open in same year.

25. Fred Funk
No, he’s no longer competitive on the PGA Tour, but the Maryland native may find some magic this week.