Golf is in good hands 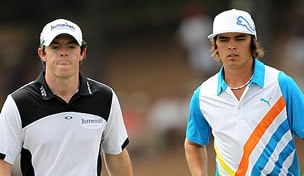 Getty Images
JEJU, SOUTH KOREA - APRIL 25: Lee Westwood of England shelters from the wind behind playing partner Prom Meeswat as caddie Alastair McLean watches on the 11th hole during the third round of the Ballantine's Championship at Pinx Golf Club on April 25, 2009 in Jeju, South Korea. (Photo by Stuart Franklin/Getty Images)  -

I can always sense the question coming. It may happen when I’m being interviewed as a witness for the defense in the case of the current state of golf. Or when an inquisitive fan on the street wants what he believes will be some inside knowledge.

The topic gets around to Tiger Woods – his physical ailments, emotional condition, technical revisions – and then we start discussing his impact on the game. What he’s meant to golf; what he means to golf; what he will mean to the future of golf.

We begin talking about numbers. How no player in the top-30 on the career PGA Tour money list isn’t a current member, how all-time major championship victory leader Jack Nicklaus ranks just behind journeyman David Peoples and his two wins on said list, how when Woods first led the money list in 1997 – his rookie season – it was with 500 percent less than he led with a decade later.

We talk about history. How Woods won 14 major titles before his 33rd birthday; how he remains just four behind Nicklaus for the game’s most hallowed record; how he will be perceived if he never reaches such acclaim.

And then the question is posed.

Does golf need Woods in order to survive?

I hate that word – “need” – especially in this circumstance. The implication is that if and when Woods decides to hang up the spikes – whether voluntarily or not – this game that was born in Scottish fields many centuries ago will fade into the atmosphere like a Phil Mickelson tee shot. Or at the very least, the professional ranks will return to the pre-Tiger era, with purses taking a significant hit and sponsors less inclined to invest in players and tournaments.

That’s laughable. Yes, he helped the game in some enormous ways, but the truth is, Tiger may need golf more than golf needs him right now.

Believe it or not, though, this isn’t a column about Woods and his potential prospects for a full return. Instead, it’s about asking the right question, the more logical and pertinent one for current times.

What does golf need in order to flourish?

If your answer has anything to do with the successful return of Woods and continued solid play of such players as Phil Mickelson, Vijay Singh and Ernie Els, you’re clearly still partying like it’s 1999.

What golf needs is the next generation of would-be superstars to fulfill their potential. It’s not only going to happen, it’s happening right now, as the present is catching up to the future with nearly every week that passes. Every individual sport is only as successful as its most popular players – and golf is no different. Which suggests that without imparting too much hyperbole, the game could flourish even more in the next 20 years than it has in the last 20.

Just take a look at the current crop of young talent around the globe.

There’s Rory McIlroy, 22, already a bonafide rockstar after his eight-shot victory at the U.S. Open. It’s hard to imagine the future landscape of golf not including him as one of the world’s best players, if not the absolute best.

There’s Jason Day, 23, who already owns a pair of major championship runner-up finishes this year. Already in his fourth full season, he tends to get lost in the “young gun” conversation, but he’s as talented as any of ‘em.

There’s Rickie Fowler, 22, who remained in contention throughout the weekend at the Open Championship. Inspiring a generation of orange flat-billed cap-wearing tweens, the lone missing piece on his resume is a first career win – but it’s coming soon.

“I think we've got a lot of young players coming through like Rory, Rickie Fowler, Ryo Ishikawa and Matteo Manassero,” Graeme McDowell said earlier this year. “I think the game is really healthy. We've got a lot of superstars in the making.”

They exist at the amateur ranks, too. There’s Patrick Cantlay, who posted a 10-under par 60 at the Travelers Championship. There’s Tom Lewis, who was first-round co-leader at Royal St. George’s before earning the silver medal as low amateur. There’s Peter Uihlein, the reigning U.S. Amateur champion who also made the cut last week.

That’s not just a long list of players who have the potential to someday succeed, but young players who are already finding success on the most elite levels. Throw in players like Martin Kaymer, Dustin Johnson, Charl Schwartzel and Anthony Kim – each of whom, at 26 or 27, is only a few years older than the aforementioned youngsters – and we start to reveal the answer to that question.

What does golf need in order to flourish? Exactly what is taking place right now, with these young players making names for themselves and hanging around on leaderboards at important tournaments so early in their careers.

They are already establishing the new establishment on a regular basis.

So the next time you hear that question, “Does golf need Woods in order to survive?” give it some extra thought. Sure, a career resurgence from Tiger would enhance the current product, but golf needs the future a whole lot more than it needs the past.