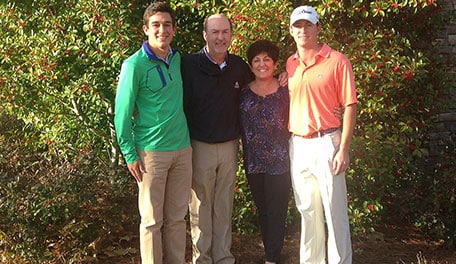 John Hayden was just nine years old when he first heard of Bradley Johnson. He was at home, right off the 14th hole of the Founders Course at Greystone Golf & Country Club in Birmingham, Ala., playing basketball with his friend Austin Taylor, the gravitational pull of golf still an afterthought for a kid with a course in his backyard. That spring afternoon, though, one of Austin’s older brothers, Sean, burst toward his driveway and breathlessly declared that greatness was nearby.

“Bradley Johnson is playing the 14th hole!” he cried.

Confronted by a pair of blank expressions, he quickly explained that Johnson was a budding golf superstar, runner-up at the previous year’s U.S. Junior Amateur and a soon-to-be college player. He told them that Johnson would be a pro someday, the kind they’d watch on TV, and if they were smart, they’d go outside and meet him now, before he becomes famous.

So the boys gathered up a few old golf balls and some hats and a Sharpie marker, raced out to the 14th green and waited as Johnson, playing a casual round with friends, finished putting. Then they politely asked for autographs.

Johnson’s buddies razzed him immediately. A 17-year-old high school kid signing balls and hats? They got a kick out of that. But Johnson didn’t act the part of celebrity diva.

“He laughed and smiled, talked to us for a little while,” Hayden recalls. “He couldn’t have been nicer.”

It was the only time he would ever speak with the budding golf superstar.

Right around noon on March 25, 2006, Johnson was involved in a two-vehicle accident. After spending the night with his two best friends at a lake house about an hour from his home, Johnson reached a stop sign on a rural county road. He pulled too far into the intersection. An 18-wheeler crashed into his green Chevy Blazer. His friends blacked out, but lived. Johnson did not.

His life was cut short on the verge of a burgeoning golf career. Johnson was planning to play a practice round for a state tournament that day. Later that weekend, he was going to reveal to his family which one of three SEC scholarship offers – Auburn, Georgia or Alabama – he would accept.

Johnson would have turned 26 on Nov. 21. Many of his friends and fellow AJGA competitors, players like Harris English, Billy Horschel and Scott Stallings, are already winners of multiple PGA Tour titles. He had the talent to reach that level, too.

“I don’t see any reason why he wouldn’t have,” says his father, Hugh. “That’s what he wanted to do – and he certainly had the love for it.”

Instead, his name has lived on with the Bradley Johnson Memorial Foundation. Started months after his death, its main purpose is to provide playing opportunities for underprivileged junior golfers.

Not long after meeting Johnson on that 14th green behind his house, Hayden started playing golf more regularly. He matured into a talented player on the competitive junior level. When he started competing in AJGA events and wanted to make a charitable contribution, he naturally chose Johnson’s foundation as the beneficiary.

Three years later, Hayden has raised more than $42,000 for a special endowment geared specifically toward underprivileged AJGA players. For that, he earned recognition as one of the organization’s top fundraisers in its Leadership Links program, as well as the Presidents’ Leadership Award, co-sponsored by the USGA.

From the Johnson family, he’s earned much more.

Not only their gratitude for helping to keep Bradley’s memory alive, but a living reminder of a kid described as kind-hearted and gentle.

“Bradley was friends with everyone,” says his younger brother Michael, currently a redshirt junior on the Auburn golf team. “He was never mean to anyone; he wasn’t part of one social crowd. And I see that with John, too. He definitely resembles Bradley.”

Their father agrees: “John has a big smile; Bradley was always smiling. John has never met a stranger, he’s always cordial; so was Bradley. Both competitive, both very pleasant young men to be around.”

As if to only hammer home that notion, Hayden’s charitable fundraising didn’t come via marathon rounds of golf or hosting clinics for younger players. Instead, he spoke with people. Told them of Bradley Johnson’s story and how he wanted help keep his legacy alive. He shook hands. He sent handwritten letters. Golf was the indirect connection for these donations, but it wasn’t his method for receiving them.

“Golf is just something I do,” insists Hayden, who will begin playing for UAB in the fall. “The foundation is about people who don’t even play golf, but donate money. It’s just word of mouth. It’s me telling people about the foundation and asking them to donate.”

Even though he only met Johnson once, Hayden says he tries to live a life patterned after everything he’s heard about him: Be nice to people; be charitable; be hard-working.

As for those autographs, he hasn’t seen them lately, but that doesn’t mean he’ll stop looking.

“I don’t know where they went,” he sighs. “I’ve tried looking for them. Someday I’ll find them and give them back to the family. I hope that day comes soon.”