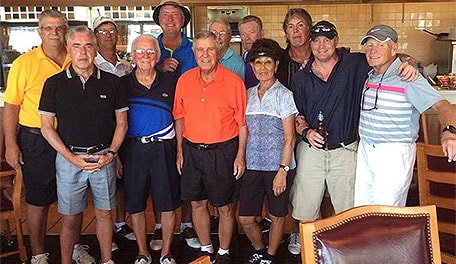 It was Monday morning and I was scanning the weekend headlines over a cup of coffee when this one caught my attention: “81-year-old man records 4 aces in 33 days.”

So I did what any of us does with irreverent and seemingly unbelievable information these days: I tweeted it. Wrote a quick one-liner, posted the link and that was that – until about 15 minutes later, when the grandson of 81-year-old ace-machine Dom DeBonis tweeted me back.

“This happens to be my grandfather,” Jordan DeBonis wrote. “It fails to say what he shot these three days. Let’s just say, he shot his age or better all three days.”

Needless to say, I had questions.

Is this the most unlikely golf feat ever? Is the elder DeBonis an ageless marvel who’s unlocked the secrets to making holes-in-one? And whose grandfather makes so many aces that his grandson can’t even keep the number straight?

I had so many questions that I decided to call the man whose recent scorecards have looked like binary code.

“Is this Mr. Hole in One?” I ask when he answers the phone.

DeBonis quickly explains that it wasn’t always this way. He began playing at age 16 and recorded just one ace in his first 65 years playing the game. It was a Saturday and he was in New Jersey. Though he can’t pinpoint the exact year – it was either 1969 or ’70 – like any true golfer with a hole-in-one on his card, he does remember the yardage.

“A hundred and seventy-eight yards,” he says proudly.

That’s one ace in nearly two-thirds of a century, which makes his impossible story of four in a 33-day span sound even more unlikely.

The first one came at The Villages, the posh retirement community where the Sharpsburg, Pa., native moved about 15 years ago. On Sept. 3, DeBonis used a pitching wedge from 101 yards to record his second career hole-in-one.

“I’d been so close all my life since that first one,” he explains. “Just inches away so many times, balls hanging on the lip that never went in. That one went in and I said, ‘Oh my God, I finally got another one after all these years.”

The grandfather of seven basked in the afterglow of his accomplishment for a little over a month – until things really started getting spooky.

If you’re scoring at home, that’s a single hole-in-one in 65 years, followed by four in 33 days – including three in a span of 72 hours. And if you’re like me, there’s only one logical question to ask after such a ridiculous accomplishment.

“So, all together, how much did you wind up spending at the 19th holes?”

“Oh, I would imagine drinks came close to $500,” estimates DeBonis, still laughing at his fortune. “They took it easy on me after the first few.”

Mercer Langley, registrar for the National Hole in One Registry, says the odds of a 14-handicap making an ace are around 12,000-to-1, but there’s really no way of quantifying three in three days. That didn’t stop Joe Nowak, a former engineer and one of DeBonis’ golfing buddies, from trying. He maintains that the number would be 12,000 to the ninth power, which equals 1.9 trillion-to-one odds.

I’d check his math, but even my calculator can’t comprehend those totals.

If it sounds completely unfathomable that an 81-year-old could hole more tee shots in just over a month than Tiger Woods in his entire PGA Tour career, consider this: DeBonis isn’t the only recreational golfer to do this. He’s not even the only one in the past 12 months. From Sept. 8 through Oct. 3 of last year, a man named Nick L. Sica of New Castle, Pa., also recorded four aces.

So maybe DeBonis isn’t that special after all, huh? Think again. Just as his grandson alluded to, not only did he have four holes-in-one, the former member of the Duquesne University golf team bested his age during each of those rounds, posting scores of 77, 78, 78 and 76.

Other than having some unbelievable memories, some great mementos and a lot more Google hits to his name, life hasn’t changed much for Mr. Hole in One. Actually, that’s not even his official nickname. For years, the commissioner of his fantasy football league had dubbed his team The Age-Breaker after his proficiency for shooting below his years. When he returned from that Myrtle Beach trip, he found the team’s name had been changed to The Ace-Maker.

Before we end our conversation, I ask him one final question.

“For a guy like me who’s never gotten a hole-in-one, what’s the secret?”

As he hangs up the phone, The Ace-Maker is still laughing. 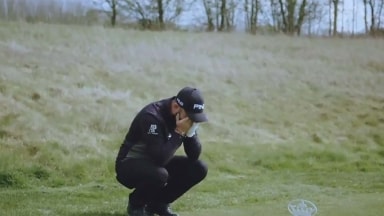 Watch: Can Sullivan make an ace with 500 tries?

Despite the unfortunate results so far, they're still apparently getting volunteers for 'Chase the Ace,' where a pro gets 500 tries to make a hole-in-one. Episode 3 features Andy Sullivan. J.B. Holmes was already having a good round before he stepped to the sixth tee at Riviera Country Club, where he soon had even more reason to smile.