DORAL, Fla. – According to the official PGA Tour record book, the first player to make a hole-in-one and win in the same week was Young Tom Morris, who accomplished the feat 147 years ago, way back at the 1868 Open Championship.

That may not be completely accurate, but hey, who’s gonna prove ‘em wrong?

The official list could be considered slightly less than official, since the next player to win a title while carding an ace didn’t happen for another 60 years. It took 14 years for the next one, then there was a gap of 32 years before the next after that.

If we are to believe this history, the veritable floodgates soon opened. In 1974, Johnny Miller made an ace en route to the Sea Pines Heritage title, then repeated the feat later that year at the Kaiser International Open. Gene Littler followed him the next year; Butch Baird the year after that; and Tom Watson the year after that.

Whether players started becoming more aggressive in the past four decades or there were more of these happy coincidences or – and this is the most logical scenario – the statistical accounting simply received an upgrade, the win-ace weekly double certainly became more prevalent. In all, there have been two dozen such occurrences on the PGA Tour, but 21 of them have taken place since Miller’s first one.

The last of those came four years ago, when Steve Stricker’s second-round hole-in-one preceded a Memorial Tournament triumph; one year earlier, Jonathan Byrd needed a memorable playoff ace to prevail in Las Vegas.

All of which brings us to this week’s WGC-Cadillac Championship and the magical mysteriousness of what took place on the fourth hole Saturday afternoon.

After failing to yield a single ace in the quarter-century period from 1990-2014, the 227-yard par-3 at Trump National Doral – playing a mere 207 yards in the third round – finally gave up a hole-in-one to Dustin Johnson … and then, two groups later, J.B. Holmes matched that feat.

Twenty-five years of futility – and neither guy could even win the skin.

Of course, it was hardly any sort of record.

During the second round of the 1989 U.S. Open at Oak Hill, Doug Weaver aced the sixth hole at precisely 8:15 a.m., followed by Mark Wiebe at 9:25 a.m., Jerry Pate at 9:50 a.m. and Nick Price at 10:05 a.m. Each used a 7-iron from 159 yards that day – and golf purists will consider it a certain sign of the apocalypse that Johnson and Holmes used the same club from 48 yards further away this time around.

Of more importance is the fact that each of Saturday’s ace-men will be in Sunday’s final pairing, trying to become the 25th player in the “official” record books to win in the same week, as Holmes will take a five-stroke lead into the last 18 holes.

Not that they’re buying into the sentimentality of the situation.

“No,” Holmes bluntly answered when asked if a victory would mean more when it included a hole-in-one. “I mean, a win's a win, so if that happens [Sunday], then that would be great. That's what you play out here for. That's what I work really hard to do. But I'm just going to go out tomorrow and control what I control and do my routines and have fun and whatever happens, happens.”

His third-round scorecard featured the rare six-card straight, with scores of 1, 2, 3, 4, 5 and 6. The final tally was a 70 that gave him the lead for a third straight night, but one of those 70 strokes will be remembered more fondly than all of the others.

“I was actually aiming right at it,” he said of the fourth-hole tee shot. “I usually hit a little bit of a cut, and if I hit it perfect, it would stay straight - and it did. So one of the rare times you get a hole‑in‑one where you actually hit it just like you want to.”

For his part, Johnson wasn’t so accurate.

“Actually, I pushed it just a hair but I wasn't aiming right at the flag,” he admitted. “I was aiming just a fraction left of it and it rolled right in.”

The pair of aces has the pair of players atop the leaderboard here at Doral, where one can only imagine what resort owner Donald Trump will suggest to counteract such feats of excellence on his brutal Blue Monster. A dog-leg par-3? Stretched out to 400 yards? With fire-breathing dragons positioned in the nearby water and his ubiquitous helicopter spinning its propellers on the green?

Let’s not give him any ideas.

After all, Young Tom Morris never had to deal with such hazards 147 years ago, when he became the first player ever to win a tournament with a hole-in-one. Or so the record books would have us believe. 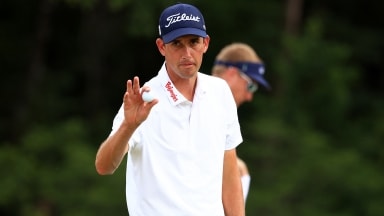 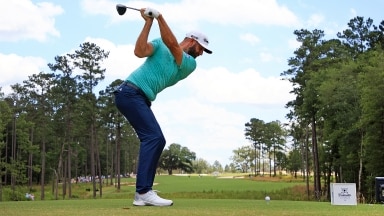 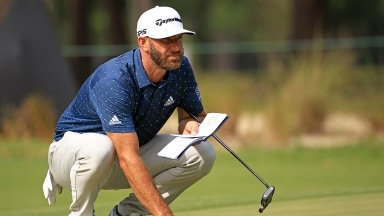