Koepka shows there's more than one way to the top

Potential future U.S. Ryder Cup captains who now understand how to pronounce his last name. Masters Tournament officials who will need to find his address for an impending invitation. And, of course, fellow elite players who witnessed a budding star with whom they'll have to contend for a long time to come.

No group, though, observed Koepka’s final-round 65 and one-stroke triumph with more personal investment than the talented up-and-comers, those wannabe pros still plying their craft in the college and junior ranks.

Two years ago, bright-eyed and full of optimism after a fruitful career at Florida State, Koepka signed up for PGA Tour Qualifying School and promptly flamed out, failing to advance past the second stage. It’s hardly a unique story. Without any official status, most young golfers will attack the mini-tour circuit; they’ll practice harder, hopefully play better and return to Q-School one year later with experience and hunger added to the arsenal of shots that seemingly every young kid owns these days.

Emboldened by a world-beater attitude, he embarked on golf’s version of a post-grad study-abroad program, qualifying to play the Challenge Tour, a developmental underling of the European circuit.

This, too, is not fully unique. Koepka isn’t the first young American to take his game to foreign soil in hopes of finding a circuitous path into the game’s upper tier. In fact, he followed friend and fellow talent Peter Uihlein in his journey overseas. Koepka might be the most successful, though – and certainly among the most successful to make it this quickly.

In his first season on the Challenge Tour, he didn’t find it to be much of a challenge. He won his first tournament start, then won twice more that season, earning an automatic and immediate promotion to Europe’s big leagues. From there, the spoils continued: Sponsor’s exemptions into PGA Tour events, which he parlayed into full-time playing privileges; major championship starts, including a pair of top-15 results last year; and now, his first European Tour win, moving him to No. 35 in the current world ranking and affording him all the luxuries of playing a schedule similar to all of the game’s best players.

Not coincidentally, Koepka’s rise happened to coincide with a new PGA Tour policy. Unlike so many previous years, when an up-and-comer could pay his entry fee, advance through Q-School and earn a PGA Tour card, last year officials instituted a ceiling.

The rule change states that no matter how well a player fares during this qualifier – no matter how dominant he seems, no matter how ready he appears to make the step to compete against the Tigers and Rorys of the world – he can only reach the developmental Web.com Tour.

All of which left that rising star demographic – let’s call ‘em the 18-to-24-year-old group ready to take on the world – watching Koepka with more than just a passing interest.

He may not have provided the perfect blueprint for all of them, but he does symbolize hope.

Koepka has armed this group of up-and-comers with the knowledge that there’s more than one way to break into the game’s upper echelon. He busted the longstanding myth that players must compete in the PGA Tour’s own qualifier and if they don’t succeed, well, just try, try again.

“Looking back, it's unbelievable,” he said Sunday, the Turkish Airlines Open trophy resting nearby. “My goal from the get‑go was to come oversees and play, and I took advantage of it.”

His goal was never to inspire the potential stars of tomorrow, but that’s exactly what he’s done. If nothing else, Koepka has proven that when a young player comes to a fork in the road in their path toward a successful career, the one less traveled can still be the right one.

And so others will certainly attempt to follow in these footsteps. Some might find prosperity which mirrors that of Koepka and his burgeoning buddy Uihlein; many others will learn that it’s not as easy as they’ve made it look.

But they’ll understand that route now. On Sunday, as Koepka soared to the biggest moment of his young career so far, and as future Ryder Cup captains and Masters officials and fellow elite players witnessed the consummation of his long-term plan, that demographic of budding stars watched, too, and maybe altered their idea that there’s only one way to make it to the top. 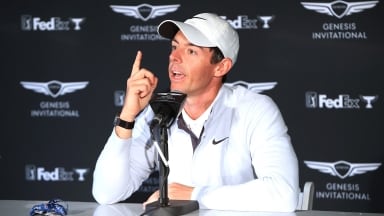 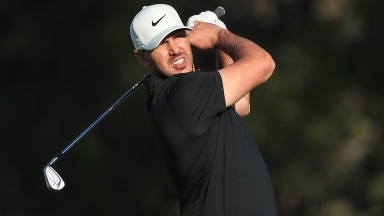 Koepka focused more on form than No. 1 ranking

Brooks Koepka's focus this week is not on regaining his No. 1 ranking from Rory McIlroy but rather his form on the golf course.