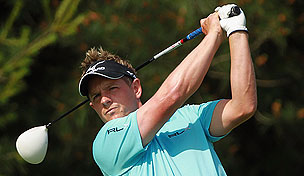 Getty Images
PONTE VEDRA BEACH, FL - MAY 05: Tiger Woods hits a shot during a practice round prior to the start of THE PLAYERS on the Stadium Course at TPC Sawgrass on May 5, 2009 in Ponte Vedra Beach, Florida. (Photo by Scott Halleran/Getty Images)  -

DUBLIN, Ohio – It was late Wednesday afternoon when one competitor in this week’s Memorial Tournament was rolling a few putts on the Muirfield Village practice green while engaged in casual conversation.

All of a sudden, he stopped putting and talking.

The player motioned to Luke Donald walking in the near vicinity and in a hushed whisper exclaimed, “Look! It’s No. 1!”

Such is the respect that Donald has achieved in recent days – and no, not all of it has been mocking.

With his victory at last week’s BMW PGA Championship, the 33-year-old became the 15th player in the 26-year history of the Official World Golf Ranking to reach No. 1 status. On Thursday, he played his first competitive round since ascending to the top, posting an opening-round 2-under 70 amidst congratulatory cheers from the gallery.

“It feels good,” Donald said about playing with that new label. “I’m excited to be there and looking forward to the challenges and excited to hopefully keep playing the way I’ve been playing.”

For those still incensed that Donald is first in the world without ever having won a major championship, get over it. He owns 14 top-10 finishes in his last 15 worldwide starts. He won the WGC-Accenture Match Play Championship over Martin Kaymer, who became No. 1 two days later. And last week he triumphed in a playoff against Lee Westwood, the previous top-ranked player.

This week he’s trying to accomplish something neither of his Ryder Cup teammates could: Win in his first start after earning the No. 1 ranking. He intimated that he didn’t seek advice in playing with the new label from either of them and perhaps it’s for good reason. Westwood came close, finishing solo second at the WGC-HSBC Champions; Kaymer was T-24 at the WGC-Cadillac Championship.

In fact, of the 14 men to previously achieve the No. 1 ranking, only three – Ian Woosnam, David Duval and Vijay Singh – won in their next start after getting there for the first time.

So far, Donald looks like he’ll bid to make it a foursome.

Starting on the course’s back nine, he opened with a 2-over 38 that included an uncharacteristic double-bogey on the 18th hole when his second shot found the front bunker, then he barely escaped the hazard, chipped onto the green and two-putted.

“I thought I hit a great 8-iron right at the pin and it came up maybe two yards short of being perfect, kicked back in the middle of the trap and just got a little bit too cute,” he explained. “Hit a poor bunker shot, another poor chip and lipped out the putt. So taking four from literally 20 feet wasn’t what I was hoping for.”

One sign of an elite player is how well he bounces back from adversity. Donald rebounded to shoot 4-under 32 on his final nine holes, including five birdies in a six-hole stretch and four in a row at one point.

Actually, the real adversity may have come days earlier, in the aftermath of his BMW victory. Donald celebrated with friends, even posting photos to Twitter of the party.

On Thursday, he talked about what he learned from his actions.

“You shouldn’t really tweet when you’re drinking,” Donald said. “I thought you’re only No. 1 for the first time once. It’s OK to have a celebration. It wasn’t a very memorable flight home, I can tell you that.”

It’s a problem he would love to endure once again this week.

Whether it says more about Donald’s own mindset or the volatility amongst the best in the world these days, it was telling that within minutes of clinching the No. 1 ranking at Wentworth, he maintained, “Hopefully I can hang onto it for a few more weeks.”

Well, good news for him. No matter what happens at the Memorial this week, Donald will remain atop the world ranking when the new order is released on Monday.

Which means he’ll be able to enjoy at least one more week of reverential tones from his peers, simply impressed to be basking in the glow of the player ranked No. 1.