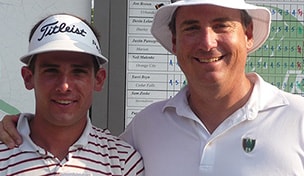 Getty Images
Branden Grace of South Africa and the International Team lines up a putt with his caddie, Billy Foster, on the eighth hole during the Day Three Four-ball Matches at the Muirfield Village Golf Club on October 5, 2013 in Dublin, Ohio. (Photo by Matt Sullivan/Getty Images)  -

When asked to recall his favorite anecdote of golf with his father, Nate McCoy doesn’t list the time they won the statewide Iowa father-son tournament … or their victory at the Pine Valley father-junior … or dad watching as a spectator when he competed in the NCAA Championship at Riviera … or any of their numerous enviable golf trips over the years.

Instead, Nate instantly summons memories from when he was 6 or 7 years old. His dad, Mike, would bring him out to an empty hole at Wakonda Club, not far from their West Des Moines, Iowa, home, where he would drop 10 balls in the fairway some 40 yards from the hole. Young Nate would stand on the green, studying his swing and marveling at how he could play each shot just a little bit differently.

After all 10 were struck, the boy wouldn’t have to walk very far to collect them all up and toss them back to his dad in the fairway, so they could each do it all over again. The swinging and the studying.

“I learned a lot watching him that way,” says Nate, now 23. “That’s where I learned how to play and learned the game, just when I was really young and watching him do his thing.”

The story may not differ much from those of thousands of other fathers and sons, but the end result isn’t so common.

This summer, Mike McCoy finally won a USGA championship at age 50, becoming the second-oldest player ever to prevail at the U.S. Mid-Amateur. And now Nate is trying to walk in his dad’s footsteps to success, breezing through the first stage of Web.com Tour Q-School last week.

“I hope the next few weeks go his way,” the father says. “He’s been working awfully hard at it. I’m really hopeful he plays well.”

“I’m super proud of him,” the son says. “It’s pretty cool to see everything come together, just to see his joy of finally completing the goal he’s wanted for a long, long time.”

For those who know their stories, it shouldn’t come as much of a surprise that neither was present for the other’s recent achievement. While Mike and Nate have spent countless hours teeing it up together, simultaneously playing rigorous competitive golf schedules isn’t exactly conducive to spectating.

And so it was that when Mike won his first USGA title in his 38th try at CC of Birmingham two weeks ago, earning an invitation to next year’s Masters in the process, Nate was already in Florida, practicing for the first stage. And when Nate posted scores of 71-65-64-69 to finish in a share of fifth place and easily advance eight days later, Mike was already back in Iowa, working his job as a commercial property casualty insurance broker at Arthur J. Gallagher & Co.

They will, though – each one promises – spend a week together in Augusta next April, as Mike has enlisted his son to caddie for him at the year’s first major championship.

“It’s not something we ever talked about,” Mike says. “I don’t know if it’s because I thought time had passed me by or what, but it will sure be nice to have him there.”

With a laugh, Nate adds, “I’m a little more nervous to caddie than he is to play.”

While he admits it would be tough to bypass a Web.com Tour event that week should he advance through the next two stages of Q-School, Nate explains that he’ll “probably definitely” still be on the bag no matter what.

It’s the least he can do for the man who first put a golf club in his hands before he could walk.

“When I was crawling on the floor, I had a club in my hand, sweeping it across the carpet,” Nate says. “He got me in so early, it was almost part of my life without me ever deciding it.”

It has remained a part of both of their lives ever since, culminating in success that may not be unprecedented, but certainly isn’t common.

Not every story of a father hitting 40-yard pitch shots to a son meticulously studying every swing results in this manner. But that was never their main goal anyway. The memories mean more than what those practice sessions have wrought.

When told that Nate’s favorite golf anecdote about spending time with his dad goes back to the early part of his formative years, Mike hesitates for a few seconds and chuckles at the memory.

“We spent a lot of time together,” he says. “I’m glad he remembers some of that.”