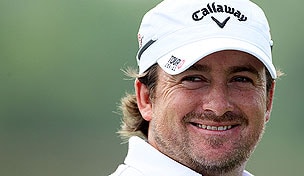 Getty Images
NORTON, MA - SEPTEMBER 04: Geoff Ogilvy of Australia plays a shot from the rough during the first round of the Deutsche Bank Championship at TPC Boston held on September 4, 2009 in Norton, Massachusetts. (Photo by Michael Cohen/Getty Images)  -

Graeme McDowell needs a beer. Maybe two. He’s nearing the end of a day in which he pitched product, gladhanded bystanders and played some hit-and-giggle golf with a group of reporters – standard fare for an elite pro like himself. When asked if he can stick around for a more formal interview session, the man known worldwide as G-Mac defers to the clubhouse where his wish is quickly granted.

One year earlier, these may have been celebratory beverages, spoils to the victor of four tournaments, including the U.S. Open, and hero of the Ryder Cup. Now, though, the hops and barley take on a more commiserative tone following a 2011 season during which he failed to record a single triumph.

As McDowell leans back and takes a slow pull on his drink, he candidly reflects on what went wrong last year after so much prior success.

“I guess looking back, if I could do 2011 differently, what would I do? I’d probably take a little bit more time off at the start of the season. … I played quite a few times and then I took a break. It was only a four-week break, but it was a switched-on break, not a switched-off break.

“I just never had a chance to switch off properly. And then when I did switch back on, things just felt different technically. My golf swing wasn’t really there and my head wasn’t really there. And there’s no doubt the expectation levels were cranked up a bit [last] year. I played like a man who wanted it really, really, really badly. Of course, you’ve got to work hard and prepare hard and you’ve got to want it, but you can’t want it so badly that it gets in your own way. I feel like I got in my own way a few times.”

It’s a mature stance for any player, but especially one who had never ascended to such a level before. Prior to his magical 2010 campaign, McDowell was only a fringe star. He owned four career victories – all on the European Tour – and had played in one Ryder Cup, but his likeness was hardly recognizable outside of industry circles, his name known only in households where the first language is golf.

Such lofty titles not only forged worldwide recognition, but newfound status amongst his peers. McDowell climbed as high as fourth on the Official World Golf Ranking, but soon succumbed to the weight of his own expectations.

“There’s no doubt my life got busier off the golf course and I wasn’t preparing as well for events as I had in 2010. I lost a bit of an understanding for my technique and why the ball went certain directions. In 2010, I knew why I hit great shots and I knew why I hit bad shots. For me, that’s sort of the golden chalice in golf. You’ve got to understand, you’ve got be able to self-fix. … I wasn’t able to self-fix.”

He missed the cut at the year’s first major championship, the Masters, but soon McDowell’s expectations for himself appeared they were on the verge of being realized. He was hitting the ball better; his head was in the right place; he was ready to win.

Again, those expectations started creeping back. Which only led to more of a letdown.

“The low point of the year for me was probably the Open Championship. I prepared great there. I thought I was ready. I thought, here we go. I’d gotten the U.S. Open out of the way, I’d given the trophy back. It was kind of like turning the page. Let’s go, let’s move on. I finished 14th at Congressional. I was happy with that, struck the ball great tee to green.

“I had a chance to win the Scottish Open, led going into the last round. Luke Donald shot 63 and I couldn’t catch him. But the Open Championship, I felt ready to go. I hit it unbelievable in practice, didn’t miss a shot in practice. I was ready.

“Then I remember, I hooked a 3-wood off the first tee into the left rough, got a flier over the back, duffed a pitch, chipped it up to 10 feet, missed it and walked to the second tee box going, ‘What just happened?’ That’s how short my fuse was. I had no patience at all. I wanted it too badly. I was starting to question everything.”

“I was being a bit unrealistic from what I was trying to achieve. I needed to reset and realize that fifth is a hell of a result. You can’t win every week. In 2010, I felt like I could win every week.”

There they are again. The expectations. They emanate from equal parts self-confidence and experience. Knowing he could achieve such goals and having already accomplished many of them led McDowell to a dark cloud, where even a silver lining only represented more rain.

“I think there’s something to be learned there, for sure. Enjoy the good times. Celebrate. Reward yourself. Because the bad times hurt, there’s no doubt about that. You’ve got to give yourself a bit more credit when things go well. Give yourself a pat on the back when things go correctly. You just never know what’s around the corner in this game, really.”

Through it all, McDowell suggests that he may have lost inspiration. Not that he doesn’t want to reach the same heights again; it’s just that it’s difficult to still want something so badly that you’ve already gained.

David Duval underwent similar feelings following his lone major championship victory. He had risen to No. 1 in the world, won a dozen PGA Tour events, then finally claimed the Open Championship. Afterward, though, he spoke of the empty sentiment that remained, how winning a big one didn’t necessarily fill him with happiness and relief. He hasn’t been the same player since.

“I’m very motivated, but things get a bit blurry. You’ve always got that desire and motivation inside you. The ultimate goal is being out there playing Ryder Cups and holing the winning putt. Winning your first major. Everyone dreams about that. I suppose when you live a couple of your wildest dreams, all of a sudden your goals get a bit blurred. It’s difficult.

“It makes me so impressed when I see what Luke Donald has done over these past 18 months, week after week after week. It’s incredible. Tiger [Woods], when he was doing what he was doing. You need drive beyond drive. It’s not just winning your first major. You need to be looking at the big picture the entire time. It’s hard to stay very sharply motivated.

“I still love the game and I play the game to win tournaments. Of course I play it to make a living, yes, but that’s well down the list of priorities for me. It’s about the competition and winning golf tournaments and the experiences that come with it.”

McDowell will make his season debut at the Abu Dhabi Golf Championship this week. It remains to be seen which G-Mac will show up – the 2010 world-beater who climbed a few levels in status with so much success or the 2011 disappointment who ultimately failed to live up to the expectations set for himself.

“I’m getting very excited about it. No massive expectations, but just going to keep doing what I’m doing. I want to get my consistency back for the big tournaments. I missed three cuts at majors [last] year, which is just not good enough, because I know I’m better than that, especially on tough golf courses.

“I probably earned enough WR points [last] year for a top-50 player or a top-30 player. In the past, that would have been a good season for me, but all of a sudden it’s not a good season anymore. It’s a hugely disappointing season. Have I really changed that much in a couple of years? I haven’t, no, but it’s like the perception of what’s good. A sixth in a WGC event doesn’t really float my boat anymore, whereas it used to be I’d give my left arm for that.

“It’s amazing how your perception of what a good week is starts to change. It shouldn’t really. It really is just about consistency, what we’re all striving for. I guess the experiences I had in 2010, I was craving more of those. But those are extra, extra special experiences – you can’t really get those week-in, week-out.

“The feel-good factor in the game wasn’t really there for me. I was expecting so much more to make me feel good. It was really like a drug. Obviously I don’t do drugs, but I can only imagine that once you start to experience great highs, all of a sudden you need so much more of it to make you feel that good.”

With that, McDowell takes another sip of his beer. He’s tasted it in both celebration and commiseration. He knows which one tastes sweeter.