McIlroy's best is better than everyone else's 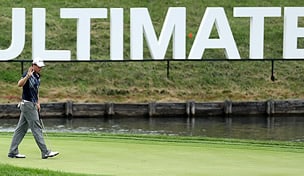 Rory McIlroy is the best golfer in the world right now.

You can place that sentence in the circular file labeled, “Duh.”

This is meant neither as a knock on anyone else nor as an indefinite description, but right now – right this very second – McIlroy’s placement atop the charts is as inarguable as the earth being round or the sun being hot.

We’ve learned this over the past month, with the 23-year-old capturing three titles in four starts, each holding differing levels of impressiveness.

But that’s not all we’ve learned during this time.

We’ve also learned that McIlroy’s best is better than everyone else’s best.

What was eminently evident during those three consecutive starts was that McIlroy’s mediocre is, well, mediocre. Which is to say, when Rory only has his “C” game, it isn’t enough to win. Or even contend. Or, in the case of the aforementioned three events, make it to the weekend.

For a man so often favorably compared with Tiger Woods, it serves as a stark contrast.

Grading a player’s performance is best done on a curve, so the reality is that each tournament winner should always conclude his week with an A+ result. As the naked eye can easily discern, however, titles are often accrued when a competitor has something less than his best game. Many times during a past decade and a half that has spawned 74 total PGA Tour triumphs, Woods has prevailed with what even he admittedly calls his “B” or “C” game.

McIlroy either doesn’t own this ability or just hasn’t shown it yet. Which, of course, is irrelevant when he repeatedly brings his “A” game to the course.

It is impossible to determine what a golfer’s “best” might entail, because that level is forever unattainable. Every drive can be longer, every approach closer and every putt purer. It’s what motivates the world’s most elite players to continue practicing and tweaking and trying to improve themselves.

If we’re realistic about it, though, if we think rationally instead of illogically about the optimal performance from a player, then it can be safely stated that McIlroy did indeed play his best golf during each of these three recent victories – at least down the stretch when it mattered the most.

All of which leads to one more thing we’ve learned about Rory in the past month: Nobody else can take a bunched leaderboard and create separation in a hurry like him.

At the PGA, his multi-stroke lead at the turn produced visions of last year’s Masters, when he parlayed a four-shot lead into a share of 15th place. Instead, it turned out to be a repeat of the 2011 U.S. Open, with McIlroy distancing himself from the pack like Usain Bolt in a sprint.

His win in Boston was hardly a runaway, but it’s noteworthy that just two other players were within five shots of him by tournament’s end. And in Indiana he was tied with five holes to play, only to turn the end of the proceedings into his own personal coronation.

In each instance, he has shown an uncanny ability to finish off his competition. If McIlroy were a football player, we’d say he has great closing speed. If he were a baseball player, we’d call him Mariano Rivera.

It happens in the blink of an eye, akin to catching a glimpse of a shooting star bursting across the sky.

Much like the speed with which he’s been closing out tournaments, Rory has firmly entrenched himself as the game’s preeminent talent. For now. So often this season, the title of best golfer in the world seemed like it belonged to whoever was the last player to hoist a trophy.

McIlroy has provided some breathing room between himself and everyone else. Should he lay an egg at the season-ending Tour Championship and Woods matches him with a fourth victory this year, it could be argued that at least there’s an argument. Otherwise, though, the player Tiger refers to as a “kid” has removed the volatility from what was an ongoing debate.

Clearly, he is the best golfer in the world right now. It is also unfailingly evident that his best is better than everyone else’s best. Each of those classifications is subject to change in the not-too-distant future, but for McIlroy simply removing doubt should be considered a mighty feat in itself.