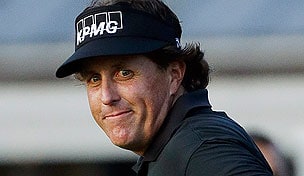 This probably isn't the first column you've read about Phil Mickelson's upcoming quest to claim the career Grand Slam. And it certainly won't be the last.

Everyone's favorite lefty has officially entered the 2013-14 season with a singular goal in mind – becoming the sixth player in the game's history to win all four modern major championships. That’s not rhetoric or hyperbole or a writer exaggerating the theme for the sake of a story.

Take it from the man himself.

The confluence of storylines will leave soap opera writers drooling with jealousy.

Mickelson and the U.S. Open have forever been star-crossed lovers. This is a tournament where he's out-heartbroken Sam Snead for ‘Most Snakebitten’ honors with six runner-up finishes. The wounds have barely healed from the last of those heartbreakers, a 54-hole lead parlayed into a Sunday afternoon loss at Merion. If that wasn’t enough, next year it will be played on the course where Payne Stewart once grabbed him by the cheeks and consoled him by extolling the virtues of his impending fatherhood.

But he isn't going to let fate or karma or the golf gods intervene this time. He's changing the script in an attempt to rewrite the familiar ending.

Mickelson has already revealed that he will cut back his 2014 schedule by about 25 percent. While staying home with his family a bit more and resting his 43-year-old body might have been factors, he hasn't minced words as to his biggest reason for making the change.

And it’s a fascinating concept.

We’ve long heard elite players – most notably Tiger Woods, but more recently the likes of Adam Scott and Rory McIlroy – maintain that they’d like their games to peak four times per year. It’s difficult enough to nail that strategy even one-quarter of the time, meaning that Mickelson’s assertion that he’d like to peak just once next year is even less forgiving.

At the very least, it raises some debatable questions.

Can a professional golfer actually prepare for an individual tournament and improve his chances? Can he successfully build his schedule around just one week? In such a mental pursuit, are there notable disadvantages to proverbially putting all your eggs in one basket?

Don’t get him wrong. It’s not as if Mickelson won’t care about the Masters or the Open Championship or the PGA anymore. It’s not like he won’t be trying to win in places like Houston or Memphis when he tees it up there, either. Or even Abu Dhabi, for that matter, where he revealed Wednesday he would be competing.

There is a definitive plan of action now, though. We can easily imagine the political cartoon of a hopeful Mickelson standing on the side of a highway, golf bag on his back with two drivers and five wedges in clear view, Sharpie in one hand as the other holds a sign which reads: “Pinehurst or Bust.”

If nothing else, it’s endearing. Not that the eminently popular Mickelson needed more fans to support his cause, but it’s encouraging to hear a professional athlete not simply go through the familiar “let’s take things one day at a time” narrative that we’ve heard so often.

Instead, he’s stated a clear goal and he’s going after it. Consider it the ultimate risk-reward from a player who has never shied away from attempting the most low-percentage shots on the course.

It will be intriguing to watch Mickelson over the next seven months and examine how he prepares for the U.S. Open. Will playing in fewer tournaments mean, like for Steve Stricker this past year, that he’s even sharper when he does compete? Will he get in an extra trip or two to Pinehurst? Or five? Ten?

The guess is that he will leave no inch of Pinehurst’s tiered terrain unplotted, that he’ll know the exact combination of drivers and wedges necessary to hit any and every shot on the formidable track. That doesn’t, of course, mean he will prevail. But he does have the right mindset.

“To use an analogy,” he said, “when I am putting well, not every putt goes in, but I catch lots of lips; the ball comes close. And the when it's close, I know that eventually they are going to fall in. And I use the same analogy for the U.S. Open. I've come close so many times. I've played well so many times in that tournament, that I believe it will happen soon.”

It could finally happen for Mickelson in 2014. If it doesn’t, it certainly won’t be for a lack of preparation.