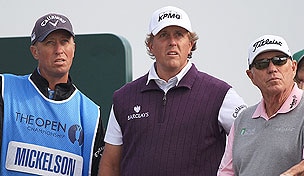 Getty Images
CHARLOTTE, NC - MAY 02: Tiger Woods and Jim Furyk mark their golf balls on the fourth green during the third round of the Quail Hollow Championship at the Quail Hollow Club on May 2, 2009 in Charlotte, North Carolina. (Photo by Streeter Lecka/Getty Images)  -

It’s no secret that these two haven’t often seen eye to eye. Mickelson has been spurned time and time again on this type of golf course, finishing in the top 10 just once in 17 previous Open Championship appearances. Meanwhile, links golf hasn’t exactly grown affection for him, either, repeatedly passing on his advancements of high-trajectory ball flight and lob shots in favor of other leading men.

According to Mickelson, we’re at the crucial turning point in the film. The two main characters met long ago, forming this dalliance that has kept them physically linked for one week every summer yet emotionally apart for so many years. Little by little, though, their passionate animosity has started to melt away and each is now seeing the good things in the other.

Yes, love is in the air here at Royal St. George’s.

“I’m really coming to enjoy and appreciate the challenge that links golf provides,” Mickelson said after his Tuesday practice round. “I’ve always enjoyed it. I haven’t necessarily done it very well. I haven’t performed very well, but I feel much better on the greens.”

Whether this is actually the case or just a typical bit of Mickelspeak remains to be seen. More than ever before, he is saying all the right things about competing on a links course, using those words – “enjoy” and “appreciate” – to summarize his feelings about such an undertaking.

Consider it part of an overall overhaul toward this new strategy for playing this type of golf.

“You know, I’m entering this year kind of like a fresh start, if you will,” he explained. “I’m not going to worry about past performances and I’m going to try to learn and enjoy the challenge of playing links golf. And I’m having fun doing that. I’m trying to pretend like it’s my first time here and appreciate playing the ball on the ground on days like this.

“I’m trying not to dwell and don’t want to look back on my past performances that haven’t been what I expect. But I feel excited and kind of reinvigorated to come over here and try to learn this style of golf and play it effectively.”

Much like the eventual lovers in every romantic comedy of the past two decades, it’s taken Mickelson and Lady Links quite a while to get acquainted to each other’s quirks and learn to accept them. Lefty is the world’s most creative golfer, but often employs an aerial assault that isn’t conducive to this style. Meanwhile, Lady Links often rewards the most creative players, but has thwarted Mickelson’s attempts for success, most notably at Royal Troon seven years ago, when his lone title contention at this tournament left him one stroke out of a playoff.

So why will things be different this time? Why will this be the year a forever-jilted Mickelson finally makes that love connection with the links?

Well, other than following the archetypal script, there’s no reason to believe otherwise. Not only does Phil own an unimpressive links record, he’s also posted relatively pedestrian results this season, including a share of 58th place at last week’s Scottish Open.

“I’m trying to learn it all from the start, from scratch,” he said. “So I think I can say I’m going in with an open mind on some of the new ideas to play the course and hopefully play it effectively.”

The script has been written. The stage has been set. Now it’s time to see whether two of this week’s main characters will finally play their part or whether Phil Mickelson’s role as the lovelorn male lead is completely miscast.